From the Teaching Negotiation Resource Center (TNRC) at PON, and iDecisionGames: digitally enhanced simulation packages designed to take your teaching to the next level.

The Enhanced Simulation Package from the TNRC and iDecisionGames brings a new, interactive learning experience to teaching negotiation. This easy to use digital package includes:

Check out this video of PON Vice Chair of Pedagogy, Professor Lawrence Susskind, describing the Enhanced Simulation Package and how it can enrich your students’ learning experience:

This new Enhanced Simulation Package is easy to use, and tracks student learning at every phase of the process: 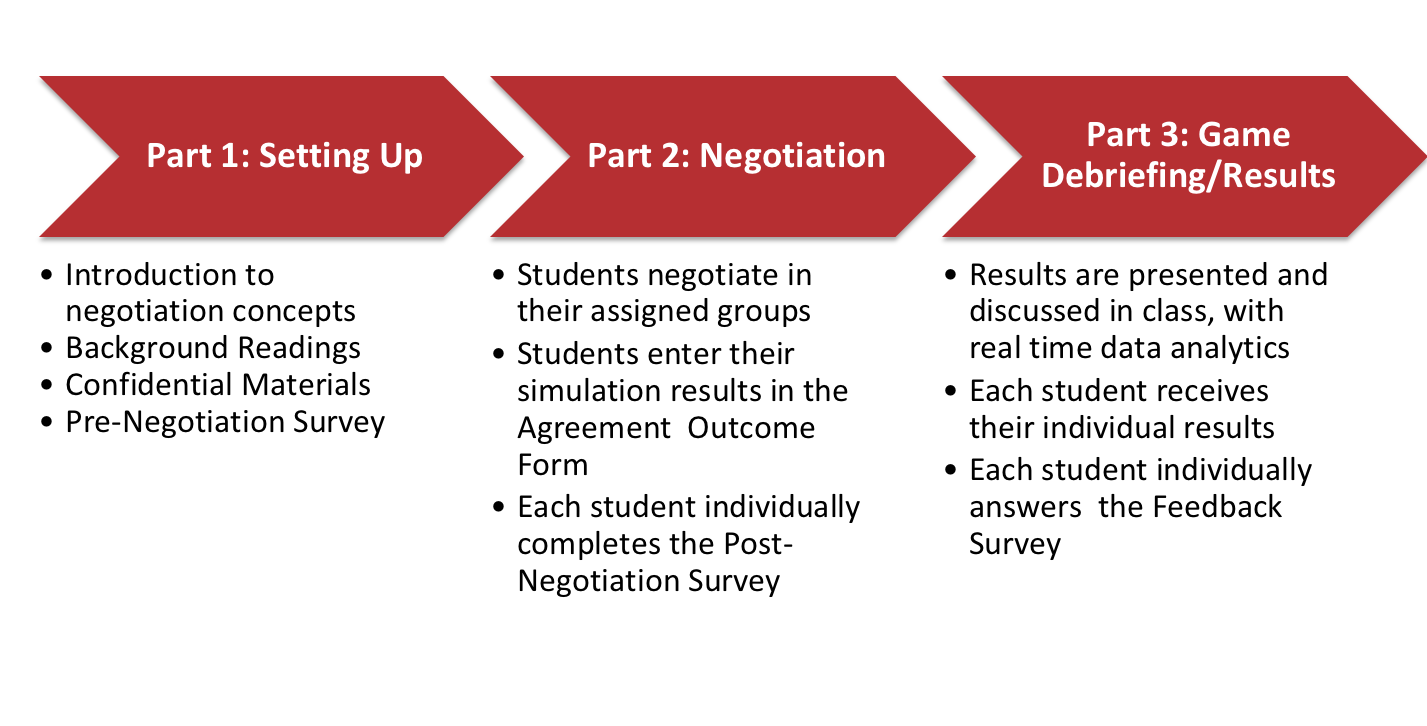 The iDecisionGames platform allows you to run the exercise remotely or in your classroom and provides 24/7 tech support which makes setting up your class quick and easy. The Enhanced Simulation Package materials are $10 per copy, and iDecision Games platform access ranges from a one-time per semester fee of $15-$50 per student.

Parker-Gibson is a two-party, single-issue distributive negotiation between two neighbors regarding the potential sale of a vacant lot. The Parkers and the Gibsons own homes on adjacent plots of land. The homes are separated by a 1/2 lot the Parkers purchased years ago in hopes of building a tennis court, which they never got around to. The Parkers are now moving out of state and are interested in selling the half lot, as the buyer of their home is not interested in it. The Parkers have approached the Gibsons about purchasing the lot. Neither party knows much about the other’s interests. The Parkers and Gibsons are meeting to explore whether a mutually beneficial transaction is possible. Major lessons of this simulation include: concepts of “fair prices,” the advantages and disadvantages of making the first offer, and the advantages and disadvantages of truthfully revealing your BATNA. Order the Parker-Gibson Enhanced Simulation Package today.

PowerScreen Problem is a two party, integrative negotiation between lawyers for business partners concerning the ownership of a new computer program one of them has developed. HackerStar, Inc. is a small closely-held corporation that develops and markets software for microcomputers. The six-year-old company was founded by Hacker, a programmer who is responsible for the company’s products and became its manager, and Star, a dentist and computer hobbyist who provided the capital. Hacker and Star are each 50% owners. The company has done moderately well, but now faces a crisis resulting from a dispute between the partners over the ownership and disposition of PowerScreen, a new product developed by Hacker, at least partly on his own time and definitely against Star’s wishes. The company lawyer has referred Hacker and Star to separate counsel in order to avoid a conflict of interest. The exercise revolves around the meeting of these lawyers. At issue is the ownership of PowerScreen and the future of HackerStar, Inc. Order the PowerScreen Enhanced Simulation Package today.

Bakra Beverage is a two-party negotiation between a beverage manufacturer, BebsiCo, and a soft drink distributor, Bakra, who are negotiating a distribution contract in the Middle Eastern country of Kumar. BebsiCo is a multi-billion-dollar, multinational soft drink manufacturer interested in expanding its operations into the Middle Eastern country of Kumar. The distributor that was supposed to handle BebsiCo’s new distribution campaign, Kabir Cola, decided suddenly last week to close its Kumari operations and focus on other Middle Eastern countries. BebsiCo and Bakra Beverage are both eager to sign a new distribution contract. In addition to the wide zone of possible agreement regarding the distribution fee, the simulation includes a range of possible criteria for determining the fee as well as numerous possibilities for value-creating options. Order the Bakra Beverage Enhanced Simulation Package today.

MedLee is a two-party negotiation between MedDevice, a U.S.-based Fortune 500 company that manufactures high technology medical equipment, and Lee Medical Supply, a small Thailand-based company that distributes medical equipment in Southeast Asia. These parties seek to conclude a joint venture, to be named MedLee, based out of a Bangkok sales office that distributes MedDevice brand medical equipment. The CEOs have already met and signed a Memorandum of Understanding and have now instructed their subordinates, Pat Armstrong, Director of International Strategic Market Research at MedDevice and T.S. Lee, the Vice President and son of the owner of Lee Medical Supply to conduct preliminary negotiations on four issues that are central to the joint venture. MedDevice and Lee Medical Supply differ greatly in their corporate cultures, which are shaped by national cultures and the demands of their respective industries. The respective negotiators must develop a way for companies with such divergent cultures to work together. Order the MedLee Enhanced Simulation Package today.

Hydropower in Santales is a six-party, multi-issue negotiation focused on issues of public engagement in hydro-power based energy development. The Ortega Company is a new hydroelectric company that hopes to build a hydropower plant in the Cordillerana region of Santales, a fictitious South American country. In a departure from normal operations, the company has asked several different communities if they are interested in allowing a hydropower plant to be developed within their borders. Of the nine communities originally considered, two have expressed preliminary interest in the project. One is the town of Villaverde, located along the Reposado River. The development of the project could bring jobs and infrastructure investment to Villaverde, but would probably reduce the flow of the river, which could threaten the livelihoods of many community members. The Ortega Company is seeking broad support for the project and has invited representatives from the nearby indigenous community, local residents, the mayor’s office of Villaverde, and the local environmental NGO (nongovernmental organization) to meet with a representative from the company to discuss their concerns. In addition, the company has hired a professional mediator. This simulation builds on basic negotiation concepts but adds complexity through not only more parties but more issues. This simulation exposes participants to different viewpoints and interests regarding energy development and related land use dilemmas, as well as addresses fundamental value differences as a key source of disagreement among parties. Order the Hydropower in Santales Enhanced Simulation Package today.

How to Handle the Public Health Impacts of Climate Change

Check out the PON Library of Enhanced Simulation Packages on the iDecisionGames Platform or go to iDecisionGames.com to learn more and to get started today.