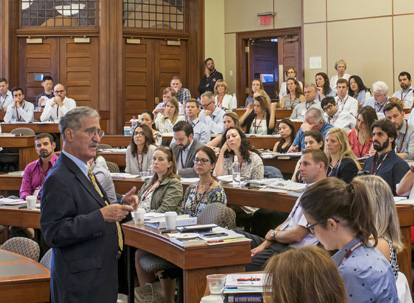 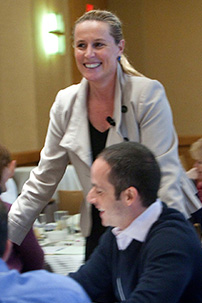 The Program on Negotiation (PON) is an interdisciplinary research center dedicated to developing the theory and practice of negotiation and dispute resolution in a range of public and private settings. PON’s mission includes nurturing the next generation of negotiation teachers and scholars, helping students become more effective negotiators, and providing a forum for the discussion of ideas.

The faculty of the Program on Negotiation at Harvard Law School are among the world’s leading scholars and teachers of negotiation theory and practice. They work collaboratively on cross-disciplinary projects, including research and writing, developing innovative new teaching materials, and mentoring young scholars. They teach negotiation in a wide range of programs and are authors of numerous books, scholarly articles, case studies, and role simulations that have been central to the teaching of negotiation to tens of thousands of graduate students and people from government, business, and nonprofit organizations.

The Program on Negotiation connects the discussion of negotiation and dispute resolution to current, world events through a wide range of conferences, workshops, lectures, film series events, and other activities that increase public awareness and highlight the research and achievements of scholars and practitioners.

Central to the mission of the Program on Negotiation is fostering an interest among students in becoming skilled negotiators in whatever profession they pursue. Through the many courses that are offered, students learn skills that will help them become leaders, and through the many activities PON sponsors, students are exposed to learning about negotiation from people around the world.

Through their ground-breaking research, Program on Negotiation faculty have been key players in the founding and development of the fields of negotiation and conflict management. Drawing from numerous fields of study, PON’s faculty and researchers connect the discussion of negotiation with real-world events and help build understanding of how people deal with conflict, what strategies and behaviors are optimal, and how to achieve value-creating and sustainable agreements.

PON created the Great Negotiator Award in 2000 to recognize individuals whose lifetime achievements in the field of negotiation and dispute resolution have had a significant and lasting impact. In 2012, PON honored its tenth Great Negotiator.

A joint initiative of the Program on Negotiation (PON) at Harvard Law School, the Belfer Center’s Future of Diplomacy Project at Harvard Kennedy School, and Harvard Business School, the American Secretaries of State Project (SOSP) was created to establish a historical chronicle through interviews with former U.S. secretaries of state about the most demanding and consequential negotiations they conducted while in the nation’s highest foreign policy office.