Harvard Law School’s Negotiation Briefings newsletter draws on ideas from leading authorities and scholars in the field of negotiation — academics who are the best in their fields.

These experts will help you realize greater success within your team, and with your counterparts, your peers and your employees.

Negotiation Briefings is delivered in a quick-reading, practical format that gives you proven negotiation strategies and techniques to improve your ability to get deals done, solve problems, preserve relationships and manage conflict. 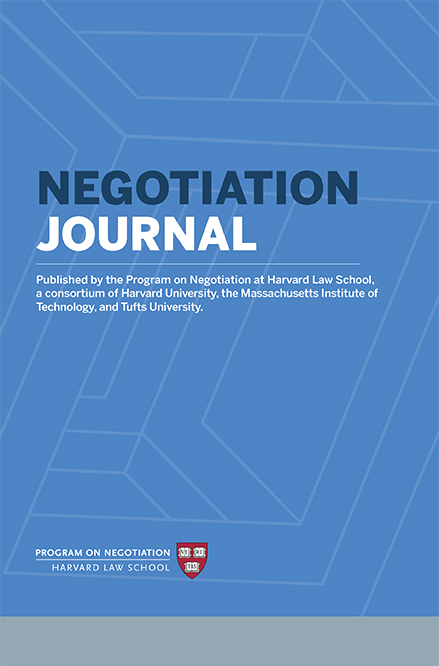 The Negotiation Journal is a multidisciplinary international journal devoted to the publication of works that advance the theory, analysis, practice, and instruction of negotiation and dispute resolution.

Negotiation, not adjudication, resolves most legal conflicts. However, despite the fact that dispute resolution is central to the practice of law and has become a "hot" topic in legal circles, a gap in the literature persists. "Legal negotiation" — negotiation with lawyers in the middle and legal institutions in the background — has escaped systematic analysis.

The Harvard Negotiation Law Review works to close this gap by providing a forum in which scholars from many disciplines can discuss negotiation as it relates to law and legal institutions. Unlike Negotiation Journal, which has a general audience of negotiation scholars and practitioners, the Harvard Negotiation Law Review is aimed specifically at lawyers and legal scholars. The premier issue (spring 1996), explored interdisciplinary academic perspectives on such topics as decision analysis, litigation settlement, and mediator roles, strategies and tactics. Subsequent volumes have expanded on these topics, and included additional discussion of the lawyer’s role as a problem solver, reconsideration of legal education in light of negotiation, and a range of case studies of innovative negotiation and mediation systems around the world.