To better understand the teaching needs of the mediation community, Negotiation Pedagogy at the Program on Negotiation (NP@PON) organized a Mediation Pedagogy Conference in May of 2009. In advance of the conference, an 18-question online survey was sent to the 175 conference presenters and registered participants. The 75% response rate allowed us to illuminate important teaching trends. A summary of the key survey findings follows.

The mediation teaching experience of the conference participants

The overwhelming majority of survey respondents are teachers of mediation (88%). Only 12% are newcomers to the field. More than half the attendees (60%) are experienced mediation teachers or trainers with eight or more years of experience. 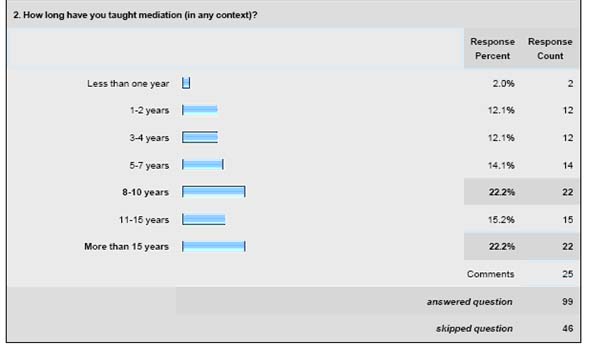 The settings in which respondents teach

Since teachers of mediation come from a wide array of contexts, survey respondents were asked to detail the settings in which they teach mediation. The majority of mediation teaching takes place in law schools (68%), followed by dispute resolution/conflict studies programs (37%), and business/management schools (23%). The subject fields in which respondents teach mediation include some surprising genres, such as theater and literature. Respondents citing theater highlighted how watching drama helps students improve listening skills; and analyzing conflict between fictional characters prepares students for mediation. The teachers who mentioned using literature in their teaching explained that being able to get inside the mind of a character helps students gain empathy, a valuable skill for mediators. Additional responses regarding the use of methods and materials from other disciplines include references to the field of psychology, among others. 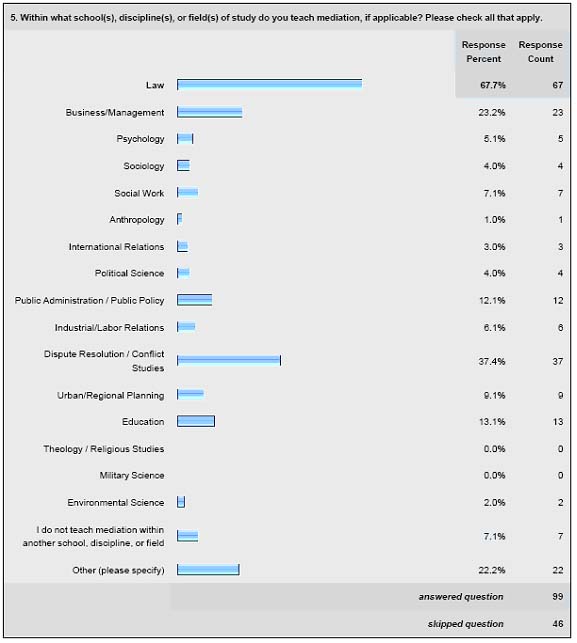 The disciplines upon which respondents draw

The most common disciplines that respondents draw on in their teaching are Dispute Resolution/Conflict Studies (77%); Law/Legal Studies (62%); Psychology (62%); and Business/Management/Organizational Behavior (39%). Other frequently cited disciplines included Sociology (28%); International Relations (22%); and Education (21%). 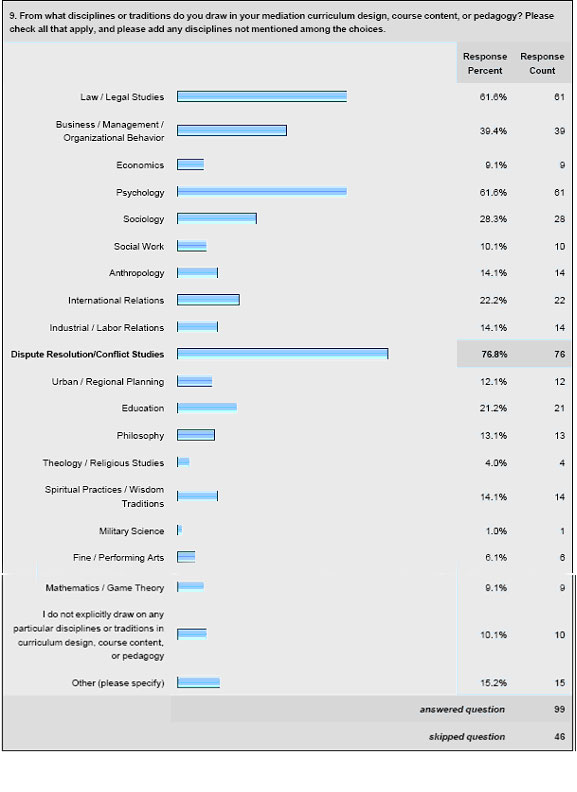 The disciplines in which respondents use mediation skills

The majority of respondents teach graduate or post-graduate students (77%). Respondents mentioned how transferable-and necessary-mediation skills can be for people working in other disciplines. For example one respondent said:

“I teach organizational behavior and after my training as a mediator I have come to realize that the core skills of mediation are critical management skills whether or not the manager does actual formal mediation; the skills are critical to managing in general, not just mediation.”

Respondents also mentioned that, outside of university settings, mediations skills are also useful to them when they train groups, for example, practicing lawyers, those involved in urban facilitation projects, people in social work practice, and more generally, anytime they need to train others regarding the management of ethical dilemmas.

The importance of role-play and an experience focused, skills based approach

“I’ve become convinced that the best way to learn to be a mediator-especially for experienced lawyers who have spent long professional lives as litigators-is to actually ‘do’ it and, therefore, from my point of view, the most important component of the basic training has to be role-playing.”

A recurring theme among survey respondents was the importance of role-play in teaching mediation.  We heard repeatedly about the need for “experience-based learning through role-play.” Instructors were encouraged to “demo often and role-play early.” Lecturing in mediation training was downplayed, because of the emphasis on skill-building. For example, respondents suggested that instructors “give lots of practical examples” and “let the students try new skills quickly before too much lecturing,” mentioning that they “have found it very useful to give a little information up front, let them try it, then deconstruct the role-play and use the role-play as an opportunity to teach the concepts.”  Respondents also suggested that having a professional observe role-play mediations is a useful teaching strategy. Many instructors are “always looking for new and varied role-play scenarios.”

Use of technology in trainings and in the classroom

Respondents seem eager to use technology and techniques that they have not yet tried. For example, one respondent mentioned that she taught university courses prior to the advent of the “great technological tools available now” and that if she were teaching in a similar setting now, “the technology tools mentioned [in this survey] would definitely be part of my teaching toolkit.” This idea is also supported by comments that some instructors add new materials every time that they teach the class. However, others commented that they have expanded their technological reach “somewhat tentatively,” indicating that barriers persist, perhaps due to the reluctance of instructors to try techniques they have not yet mastered.

There seems to be a disconnect between how frequently respondents use certain technologies and how highly they rank those technologies in terms of their importance in teaching mediation. For example, 22% of respondents stated that they “never” use course websites or online instruction to supplement face-to-face classes, but 28% responded that these are “important” tools, and an additional 27% responded that they are “somewhat important.” Only 21% responded that making use of course websites was “not important at all.” Similarly, 34% “never” use video recordings of their students/trainees, but 17% said that such video recordings were “extremely important,” while 29% responded that it was “important” and 32% stated that it was “somewhat important.” This suggests that opportunities to video-record students or trainees may be highly constrained.

A U.S.-centered group with a growing international presence

The majority of survey respondents work primarily in the U.S. (77%), with the second- largest group teaching in Europe (17%). One respondent commented that mediation and conflict management have only recently been introduced at his or her university and he or she is now attempting to professionalize the approach to teaching it.  Importantly, this respondent has begun translating prominent mediation materials from English into the working language of his/her institution.  In addition to language barriers, one possible reason for the slow expansion of mediation teaching outside of North America is the difficulty of fitting mediation into an existing array of disciplines. 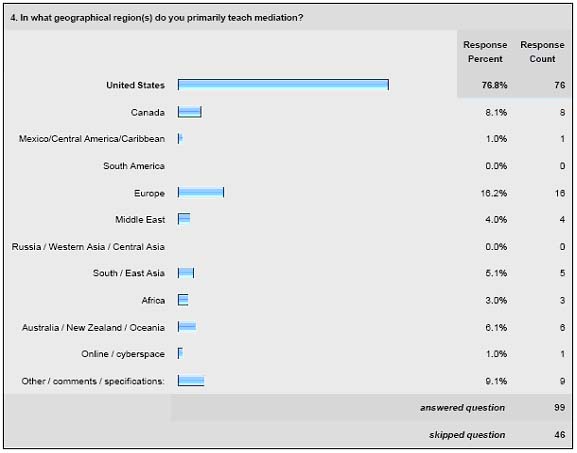 When discussing challenges to teaching mediation, one point came up again and again: the difficulty of acting as a mediator while teaching people the skills of listening and facilitation, as opposed to problem-solving. Respondents poignantly reflected on their own difficulties in portraying the qualities that they wished to impart to their students:

“As an instructor an ongoing challenge is [to be] more facilitative in my teaching and less directive. This seems to be a common challenge for my students as mediators as well: practicing patience and allowing the process to unfold through inquiry and facilitation versus rushing to an outcome or resolution.”

Respondents emphasized the need to reflect on these difficulties in teaching mediation and to model best practices:

“Listen and model your own behavior-I think this advice I would give [to students is the advice I would give] myself first: slow down, listen, show more time for silence and reflection. Mirror the qualities of [the] mediator in your teaching.”

Beyond controlling these tendencies, the predisposition of many audiences toward adversarial interaction or definitive problem solving proves to be a frequent difficulty for instructors:

“It is challenging to teach how to listen and use [listening] in a constructive way.”

“I think the people who are most interested in my agency’s training also have a basic interest in the law and in ‘helping people’ which can make them more advocates than neutrals.”

“[A] difficulty for the MBA audience at the beginning of the course [is] to consider as important the role of somebody who does not propose a solution but only intervene[s] in the process.”

“Some of my law student and lawyer students are so oriented to adversarial perspectives that they have trouble remembering to deal with interests.”

“We are so used to solving/giving advice about other peoples’ problems, that it is difficult to actually sit and actively and reflectively listen and to allow the other person to solve his/her problem without our giving advice and offering solutions.”

In light of these challenges, many respondents had concrete suggestions and emphasized the importance of teaching listening, empathy, creativity, flexibility, and patience.

“Mediation as a skill requires a deep personal commitment and in my view requires a set of skills that are not taught (at least explicitly) in a law faculty-these are the skills of deep listening, empathy, creativity.”

“Understand that mediation includes a variety of new skill sets which initially often appear to be daunting and counterintuitive to the learners.”

“Let go of problem solving, understanding the difference between an open-ended question and a leading question.”

“Be patient-it takes a while for law students to understand how different
a role it [being a mediator] is.”

Written by Jessica Corsi, taken from the Winter 2010 issue of “Teaching Negotiation,” the biannual e-newsletter of Negotiation Pedagogy at the Program on Negotiation (NP@PON).