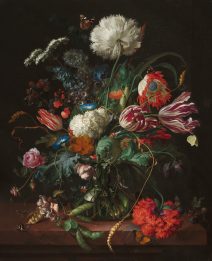 What do you do when you believe you’ve been wronged, the offending party won’t talk to you, and you have no legal recourse? Would you look for new paths for communication and conflict resolution? Or would you go public?

That’s what the world-renowned art museum the Uffizi Gallery in Florence, Italy, did in January 2019 to try to draw attention to its attempts to reclaim a work of art stolen during World War II and in the possession of a German family. The 18th-century Vase of Flowers by Dutch master Jan van Huysum has been difficult to recover because of a German law that puts a 30-year statute of limitations on legal claims for stolen property, according to the New York Times.

In 2018, the German family that has the painting tried to sell it back to the Uffizi, reportedly for about $567,000. “We’re trying to get the German family to understand that we are not in a legal position to buy something that according to Italian and international law we already own,” Uffizi director Eike Schmidt, who is German, told the Times.

With the Italian authorities unable to get satisfaction from the German government, Schmidt took the dispute to the court of public opinion. On January 1, the Uffizi posted on its website a video showing Schmidt hanging a black-and-white photo of Vase of Flowers in the Pitti Palace, where the painting used to be hung, with the word stolen surrounding it in red letters in Italian, English, and German. A caption informs the public that the work was taken by German soldiers and is now held by a German family. The Uffizi also posted a lengthy “appeal to Germany for 2019” by Schmidt on Twitter.

The campaign was ultimately effective, but some call it hypocritical. Like Germany, Italy has been criticized for being slow to return Nazi-looted art that hangs in its museums.

A new partner can change everything

Personnel changes can lead a trusting trade relationship to deteriorate in a flash, as Paris’s Louvre Museum found in negotiations with Italian counterparts.

In 2017, Louvre directors asked Italian museums to loan several masterpieces by Leonardo da Vinci to help round out the Paris museum’s planned 2019 exhibition commemorating the 500th anniversary of the great Renaissance master’s death. In return, the Louvre agreed to loan works by Raphael for a 2020 Rome exhibition marking 500 years since that Italian master’s death.

But the trade was in doubt after Italy’s new populist government took power in June 2018. Lucia Borgonzoni, the new undersecretary for Italy’s Ministry of Cultural Heritage and a member of the hard-right League party, told the Telegraph that the deal was “one of the biggest, most shameful acts of the previous government with regard to cultural heritage.” For the trade to be fair, according to Borgonzoni, France should be loaning something of equal value during Leonardo’s anniversary year. “Leonardo was Italian, after all,” she said. “Why don’t they loan us the Mona Lisa?”

Borgonzoni said her ministry had taken over negotiations from museum directors and was working to cancel the loans. The anti-globalist regime in Italy also picked fights with pro-European French president Emmanuel Macron on migration and trade, according to the Times.

At least one Italian curator said the spat over the Leonardos was much ado about nothing. Uffizi Gallery director Eike Schmidt said his museum had never agreed to loan the Leonardo masterpieces requested in 2015 because they were too fragile. The only major work scheduled to go to the Louvre is Leonardo’s La Scapigliata, from the National Gallery of Parma, whose director called the brouhaha “a total Italian soap opera.”

Eventually, through strong communication and conflict resolution efforts, the two countries agreed to a deal wherein several Italian galleries would lend works by Leonardo to the Louvre. In return, Italy would acquire works from France (as well as other countries) for their Raphael exhibit.

What have you found to be effective communication and conflict resolution techniques?