When parties can trade on their preferences across different issues, they reduce the need to haggle over price and percentages. But are there ways to avoid conflict in other types of negotiation?

At a past event on the Harvard University campus, former U.S. secretary of state Madeleine Albright recalled the first time she and her then boss, President Bill Clinton, met Vladimir Putin. It was 1999, and they were attending the Asia-Pacific Economic Cooperation conference in New Zealand. Russian President Boris Yeltsin had just chosen Putin as his preferred replacement. Deeply curious about the former KGB agent, Albright remembered observing that Putin seemed “very smart,” “cold-blooded,” and “reptilian.” Putin “was trying very hard to ingratiate himself with everybody, and especially with Bill Clinton,” she told the Harvard audience. “It was interesting to watch.”

Albright’s observations of Putin highlight a key piece of advice she offered while being interviewed on April 2, 2015 as part of the American Secretaries of State Project, a program organized by the Program on Negotiation and Harvard Kennedy School’s Future of Diplomacy Project: “Learn as much as possible about the other person.” 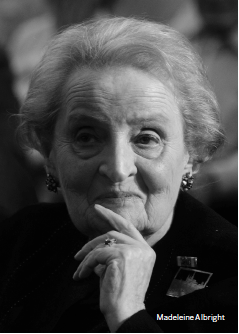 Born in Czechoslovakia in 1937, Albright immigrated to the United States with her family in 1948 and became a U.S. citizen in 1957. After earning a Ph.D. in public law and government from Columbia University, she launched a career in public service, eventually being appointed U.S. ambassador to the United Nations by Clinton in 1993. As ambassador and then as secretary of state during Clinton’s second term from 1997 to 2001, Albright spearheaded several intricate negotiations, including campaigns to bring Central European nations into the North Atlantic Treaty Organization (NATO) and to respond militarily to the 1999 crisis in Kosovo. The first female secretary of state, Albright blazed trails as a woman negotiating in the largely male world of international diplomacy.

During her visit to Harvard, Albright was interviewed about her most important diplomatic negotiations by Program on Negotiation chair and Harvard Law School professor Robert Mnookin, Harvard Business School professor James K. Sebenius, and Harvard Kennedy School Professor Nicholas Burns. Several insights emerged from the discussions that business negotiators can use in their own complex deal-making and finding ways to avoid conflict.

In 1993, while serving as U.S. ambassador to the United Nations, Albright spent a few days crisscrossing Central Europe with General John Shalikashvili (then the chairman of the Joint Chiefs of Staff), meeting with the leaders of former Soviet nations to negotiate the terms of their potential membership in NATO. In what they referred to as an “accident of history,” Albright and “Shali,” as she calls him, were both born in Central Europe, a fact that they emphasized to build rapport during the negotiations.

Albright not only needed to negotiate with Central European leaders but also had to convince the U.S. Congress and current NATO members of the value of expanding the organization. Even more difficult, she faced the challenge of reassuring Russia, then led by Yeltsin, that it need not be threatened by the inclusion of former Soviet states such as Poland, Hungary, and the Czech Republic under a rival international umbrella. At the Harvard event, Albright said that she spent “an inordinate amount of time” negotiating a road map for cooperation between Russia and NATO with Yeltsin and his foreign minister, Yevgeny Primakov. Russia eventually was invited to join the Group of Eight (G8) economic council of wealthy nations, in part to encourage its leaders to be “responsible players” and to not “rub their face in the fact that they were a declining power,” Albright said.

But at Harvard, Albright expressed concern that the strategy had been inadequate, revealing that she had recently asked Clinton whether NATO expansion had been a mistake. Many have attributed Russian president Putin’s decision to invade Crimea to a desire to strengthen Russia’s diminished global stature. (The other G8 nations suspended Russia from the council to protest the invasion.)

“Ask the Poles” was Clinton’s confident response to Albright’s question about NATO expansion. Her own answer is more measured. “I think we did the right thing,” she said at Harvard, adding that she believes nations should be able to form alliances without fear of reprisal. But she acknowledged that “we didn’t do a good enough job” of bolstering Russia’s stature on the global stage.

The admission points to the importance of looking for ways to help counterparts and adversaries save face when they must cope with a loss of status or power, or another indignity. At times, we also need to accept that there may be little we can do to appease a party that’s being excluded from a negotiation. In such cases, we may need to weigh the risk that they will retaliate against the likely short-term and long-term benefits of reaching agreement. Here, again, careful observation and analysis of those involved are crucial.

In 1998, Albright became determined to defuse tensions in the Yugoslav province of Kosovo. Serbian president Slobodan Milošević had been promoting the rights of the Serbian minority in Kosovo by discriminating against ethnic Albanians and ultimately authorizing “ethnic cleansing.”

Albright, whose father had been the Czechoslovakian ambassador to Yugoslavia when she was young, was haunted by what she perceived to be Western powers’ slow response to the Bosnian genocide of the early 1990s. Determined to try to prevent history from repeating itself, she began lobbying the Clinton White House to take a stand against Milošević’s aggression.

When parties can trade on their preferences across different issues, they reduce the need to haggle over price and percentages.

“Here I was, a mere mortal female civilian, arguing with this great general.”

General Colin Powell, then the chairman of the Joint Chiefs of Staff, opposed Albright in meetings at the White House, arguing that the United States did not have a strong enough interest in a war in the Balkans. “He would come into meetings in full uniform, with medals from here to here,” Albright said at Harvard. “Here I was, a mere mortal female civilian, arguing with this great general, who made it very clear that I understood nothing.” But Albright won over President Clinton and, in a series of intricate negotiations, NATO leaders as well. (She and Powell eventually became good friends, she added.)

In October 1998, NATO warned Milošević that it would launch airstrikes against Serb positions in Kosovo, and against Serbia itself if he did not agree to draw down troops in Kosovo and negotiate with the Albanians for their autonomy. Milošević agreed, but a cease-fire collapsed in January 1999 when Serbian police massacred Albanian civilians in the town of Račak.

On finding common ground with adversaries:

“I think we have to figure out how to be firm on certain issues to do with Russia, but at the same time try to find areas where we can cooperate.” She noted that Russia has been a helpful partner in U.S.-led negotiations to disarm Iran’s nuclear program, for example.

Similarly, reflecting on her success in convincing the influential conservative Senator Jesse Helms to agree to NATO expansion, she said:

“I could not have had a discussion with Jesse Helms on race, I mean, I would have walked out of the room. But you keep your eye on the ball and then try to figure out where the places are that you can find something in common.

Speaking of her negotiations with China as U.S. ambassador to the United Nations during the 1990s – relatively placid period in Sino-American relations – Albright said: “I got so bored with my talking points to the Chinese that I said to my counterpart, ‘You give me your talking points and I’ll give you mine. Why don’t we talk about larger strategic concepts.'”

On being the first female Secretary of State:

Contrary to stereotypes that many male leaders brought to their initial negotiations with her, Albright said: “I ultimately got to be known as not being a pushover.”

“Setting deadlines is a mistake. We did that in Bosnia. We said we’ll be out in a year, when we weren’t. Setting a deadline is holding a gun to your own head.”

As she writes in her memoir Madam Secretary (Miramax Books, 2003), Albright viewed Russia as a pivotal player in the conflict because of its close ties to the formerly communist Serbia. Specifically, she pursued a “double magnet” approach that involved bringing Russia closer to NATO’s position on Kosovo and then counting on Russia’s links to the Serbs to convince Milošević to back down. During the intermission of an opera at Moscow’s Bolshoi Theatre, Albright persuaded Yeltsin’s foreign minister, Igor Ivanov, to agree that Russia would not actively try to block NATO airstrikes on Serbia and would participate in presenting an ultimatum to Serbia at an upcoming peace summit in France.

But Milošević, whom Albright characterized in her book as living in a “parallel universe,” remained belligerent. NATO launched airstrikes on Serbia, which ramped up its attacks on Albanians. As the war entered its third week, Albright continued to pursue her double-magnet strategy, trying to convince Russian leaders—who were angered by the NATO bombing—to agree to participate in an international peacekeeping operation in Kosovo.

Calculating that Milošević was too stubborn and prideful to concede to NATO, former Russian prime minister Viktor Chernomyrdin, whom Yeltsin had paired off with U.S. vice president Al Gore for crisis negotiations, proposed bringing in a neutral third party to help negotiate with the Serbian leader. Albright recruited Finnish president Martti Ahtisaari, an experienced diplomat, to fill that role. Together, Ahtisaari and Chernomyrdin persuaded Milošević to accept a deal that included the withdrawal of Serbian forces, a United Nations peacekeeping mission, and independent elections in Kosovo. On June 9, Yugoslav forces began withdrawing from Kosovo, and NATO airstrikes ended the next day.

At Harvard, Albright noted that a neutral third party is sometimes needed to help a double-magnet approach succeed. More broadly, her negotiating strategy serves as a reminder that we have alternatives to negotiating directly with an obstinate counterpart. By sizing up that counterpart’s allies and trying to bring them on board, we may be able to forge an indirect path to agreement. Once again, Albright’s advice returns to the importance of understanding interests—of not only those at the table but also those who may be persuaded to influence your counterpart in your direction.

5 Ways to Avoid Conflict in Negotiation

There are five good ways to avoid conflict that we can gather from Albright.

1. Learn as much as possible about the other party.
Let your counterpart’s wants and needs guide you to your strategy.

3. Help them save face.
But recognize that the other side may not be able to overlook perceived slights.

5. Recognize the power of neutrality.
When all else fails, an unbiased third party can build bridges.