As they contemplate how to bargain salary, job candidates are often at a disadvantage relative to the hiring organization. Due to the well-documented anchoring effect, the first figure introduced into a negotiation tends to strongly influence the final outcome. Unfortunately for candidates, the wage or wage range that employers give in a job listing or salary discussion tends to anchor talks in the organization’s favor.

To counter a low anchor from the hiring organization, a job candidate might try to introduce a high anchor. But how? In an article in the Journal of Applied Social Psychology, University of Idaho professor Todd J. Thorsteinson examined whether a job candidate could get a higher salary by mentioning an outrageously high number in a joking way. 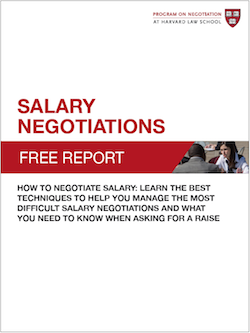 You Want How Much?

Looking at how to bargain salary, Thorsteinson asked 206 college students to imagine they had decided to hire a particular candidate for an administrative assistant position and were about to negotiate salary with her.

In case the college students thought that $100,000 was a plausible “ask” for an administrative assistant, in a second experiment, Thorsteinson added a condition in which the candidate jokingly asked for $1 million before saying she just wanted a fair salary. Once again, participants offered her more when she aimed outrageously high, about the same amount offered following a joking $100,000 request.

In this study, the anchoring effect held even when unrealistic requests were delivered in a joking way. The results suggest the value of trying out advanced negotiation techniques—but does this mean you should jokingly ask for an outlandish salary in your next job negotiation? Not necessarily. An outrageous offer risks offending your counterpart or leading him to believe that there’s no way you’ll come to agreement.

Still, the success of implausibly high anchors in Thorsteinson’s experiments suggests this might be an interesting tactic to add to your compensation negotiation strategies when determining how to negotiate salary, perhaps when paired with a more reasonable offer. And what might that be?

Before we negotiate price, negotiation experts typically advise us to first assess the zone of possible agreement (ZOPA)—that is, whether there is an overlap between your reservation point (the point at which you are indifferent between walking away or taking the deal) and the other party’s reservation point. In a salary negotiation, is there at least one number on which you and the hiring company can agree?

Figure this out by researching your industry, talking to others in your position, and assessing your own qualifications. For example, the administrative assistant might conclude that $29,000 to $36,000 is the general salary range for people with her experience. Based on her salary expectations, she might also decide that she would not accept less than $31,000 (her reservation point) and estimate that the employer would not agree to more than $35,000. Thus, she estimates the ZOPA to be from $31,000 to $35,000. Then she could make a request a little above the ZOPA, such as $37,000, and aim to settle for about $35,000.

If you’re up for trying out some humor (and the employer seems receptive), you might say, “I’d like $1 million, of course, but based on my experience and industry standards, I think $37,000 would be appropriate.” The $1 million figure might serve as an effective anchor alongside a more appropriate one.

What other advice would you give to those considering how to bargain salary?