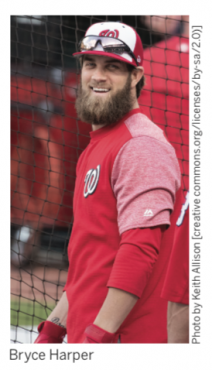 Major League Baseball (MLB) games are known for their leisurely pacing. The past few years, offseason negotiations between teams and free agents have proceeded at a similarly glacial rate, to the consternation of players. Changing power dynamics between players and teams have contributed to the situation, which has left players eager to revise their collective bargaining agreement.

Amateur baseball players enter MLB through a draft and typically must play in the major leagues for six years before becoming free agents. For talented players, free agency offers the hope of a lucrative multiyear contract after several seasons of relatively low pay.

Players eligible for free agency can begin negotiating with teams in late fall, soon after the World Series. The largest free-agent contracts historically were wrapped up before Christmas, leaving players the rest of the winter to relax, relocate, and recharge for the upcoming season.

In the winter of 2017–2018, however, several big-name free agents weren’t signed until after the holidays, with some players left hanging until February or March, Ben Lindbergh writes in the Wall Street Journal. Players who weren’t signed in time to join a team for spring training had to attend a camp operated by the Major League Baseball Players Association (MLBPA) as they waited for offers.

This past winter, the trend appeared to continue, as top prospects, including Manny Machado and Bryce Harper, were left cooling their heels into February while teams dragged their feet.

Teams are in no rush to sign top free agents for several reasons, according to Lindbergh. First, the longer players are made to wait, the lower their negotiating power. If a team can’t do a deal with one particular free agent, the team will find another one by the start of the season. Players, meanwhile, can’t play until they’ve signed with a team. Because players have more to lose than the teams, “when time pressure mounts, players settle,” to the teams’ advantage, writes Lindbergh. Indeed, when a player signs late in the offseason, he’s likely to earn less than was forecasted for him at the start of the free-agency period.

Not surprisingly, then, evidence suggests that players who sign late in the winter produce more WAR, or wins above replacement, for their money—that is, they make a greater contribution to their team’s success relative to other MLB players in the same position. As a result, Lindbergh concludes, “teams tend to win when they play chicken with free agents closer to Opening Day.”

Making matters worse for players, on- field success has become less critical to teams’ bottom line. Thanks to lucrative broadcast deals and payoffs from the MLB’s 2018 sale of its digital division to Disney, teams are relying less on ticket revenues. As a result, winning may become less of a financial priority, giving teams less motivation to scoop up the best free agents as quickly as possible.

In addition, the MLB’s compensation structure is set up to reward veteran players, yet lately teams have been more interested in slowly building younger, less expensive rosters. Thanks to advances in baseball analytics, they’ve learned that expensive long-term contracts for aging stars often aren’t worth the price. As a result of this shift in strategy, the average MLB salary fell in 2018 for the first time since 2004, notes Lindbergh.

On February 19, the floodgates finally burst when 26-year-old third baseman and shortstop Manny Machado reached a record-breaking 10-year $300 million deal with the San Diego Padres. It was the largest free-agent contract in American sports history, but not for long: A week later, 26-year-old right fielder Bryce Harper, MLB’s Most Valuable Player (MVP) for 2015, reached a 13-year $330 million deal with thePhiladelphia Phillies.

Harper, who played with the Washington Nationals from 2012–2018, had twin goals for his next job, according to his agent, Scott Boras: securing the largest contract on record and making it a long one. “He wanted to go to one city, stay there, build a brand and identity and recruit players,” Boras told the New York Times. “He wants to tell players, ‘Come play with me.’” With most teams leaning toward shorter contracts, it wasn’t easy to get Harper the kind of long-term deal he desired, Boras told the Times, but the fact that Harper is still young helped.

The person Harper may have most wanted as a teammate was 27-year-old Mike Trout, a two-time league MVP widely viewed as the best baseball player today. But on March 19, news broke that Trout will be signing a 12-year $430 million contract with his current team, the Los Angeles Angels—a deal that blew past Harper’s record.

Wait till next year

These recent deals by three of the game’s best players suggest that reports of free agents suffering financially are greatly exaggerated. However, their tremendous promise likely makes them outliers rather than indicators of an upward salary trend for players in general.

With their collective bargaining agreement due to expire at the end of the 2021 season, MLB and the players’ union plan to take up the issue of the slow free-agent market, according to the Associated Press. The MLBPA is also under pressure to find a way to increase players’ earnings at the start of their careers, a change that might align with teams’ reluctance to sign long-term contracts.

Looking beyond baseball, there are many takeaways that business negotiators can absorb from the changing dynamics within MLB: