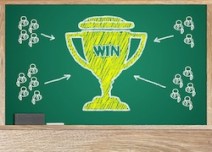 All of us have a personal approach to negotiation, or negotiation style. Here’s how to make the most of yours.

Your boss has asked you and a colleague to collaborate on a marketing campaign for your small company. At your first meeting, you and Jeff, your colleague, present several proposals to each other.

You believe Jeff’s plans aren’t very good and that one of your proposals is the clear winner.

But Jeff suggests you work together to “merge” your good ideas. Will you negotiate for your preferred proposal?

What will you say or do to try to influence the outcome?

Dropped into this scenario, readers likely would behave in a variety of ways. Some might bluntly identify for Jeff the perceived flaws in his proposals. Some would use “softer” strategies to try to get their way. Others would try to collaborate with Jeff on a compromise solution that draws on both sides’ ideas.

Have you ever wondered if your negotiation style is too tough or too accommodating? Too cooperative or too selfish?

You might strive for an ideal balance, but, chances are, your innate and learned tendencies will have a strong impact on how you negotiate.

Wise negotiators seek to identify these tendencies and enhance them according to the situation.

Individual differences in “social motives,” or our preferences for certain kinds of outcomes when we interact with other people, strongly affect how we approach negotiation, according to Carnegie Mellon University professor Laurie R. Weingart.

Drawing on the social motives that drive our behavior, Weingart and other psychologists have pinpointed four basic personalities or negotiation styles:

Individualists concentrate primarily on maximizing their own outcomes and show little concern for others’ outcomes. According to studies of businesspeople and students, about half of U.S. negotiators have an individualist style. Instead of creating value, individualists tend to claim it, argue their positions forcefully, and, at times, make threats.

Cooperators focus on maximizing their own and their counterparts’ results. Composing about 25% to 35% of the U.S. population studied, cooperators are motivated to ensure that each party in a negotiation receives her fair share. Cooperators are more open to value-creating strategies—such as exchanging information and making multi-issue offers—than individualists are.

Competitives are motivated to maximize the difference between their own and others’ outcomes. Because of their strong desire to “win big,” competitives—about 5% to 10% of U.S. study participants — tend to engage in behavior that’s self-serving and blocks collaborative solutions.

Altruists, a rare breed in studies of American negotiators, strive to maximize their counterparts’ outcomes rather than their own.

Though few of us are pure altruists, virtually all negotiators behave altruistically under certain conditions, as when dealing with loved ones or those less fortunate than we are.

The subtleties of style

Have you decided what type of negotiator you are? Identifying yourself can be difficult for several reasons.

First, many of us display different negotiating styles over the course of a single negotiation. And your overall style may differ from one negotiation to the next, depending on the situation and your counterpart’s behavior.

You might be especially wary when approaching someone known for self-interested behavior. Researchers also have found that people tend to “get in sync” with each other during the course of a negotiation, whether deliberately or subconsciously.

Returning to our opening scenario, suppose you believe you get the best results by being direct and forceful. But Jeff’s initial collaborative conflict management style catches you off-guard. You find yourself suggesting ways to incorporate a few of his best ideas into your preferred proposal. Jeff responds by advocating more forcefully for one of his plans. Ultimately, your negotiation styles meet in the middle.

Adapted from “Is Your Bargaining Style Holding You Back?,” first published in the December 2009 issue of Negotiation Briefings.