A 2019 contract dispute between the Chicago Symphony Orchestra (CSO) and its musicians led to a disruptive seven-week strike, the longest in the venerable orchestra’s 128-year history. The unlikely intervention of Chicago’s mayor just before he left office managed to draw this thorny dispute resolution example to a mutually satisfactory finale while also highlighting the role of negotiation in conflict resolution.

Negotiations in a Minor Key 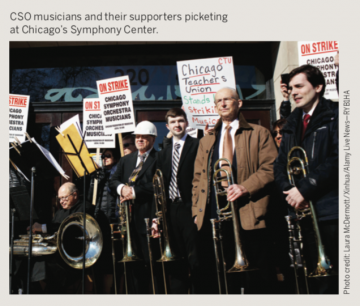 Over 11 months of negotiations, the musicians, represented by the Chicago Federation of Musicians, were unable to negotiate a mutually agreeable new contract with management, the Chicago Symphony Orchestra Association (CSOA).

There were two main points of contention. First, because of rising costs, and in keeping with broader employment trends, the CSOA wanted to change the performers’ pension from an employer-funded defined benefit plan to a direct contribution plan akin to a 401k. The musicians flatly refused, maintaining that defined benefit plans were still standard for major orchestras. Second, the musicians demanded a significant raise to bring the orchestra’s annual base salary, then around $160,000, in line with that of other major U.S. orchestras, but the CSOA would agree to only modest increases.

On March 10, 2019, the musicians declared a strike and began picketing in front of Symphony Center on Chicago’s Michigan Avenue. Though conductors typically stay neutral in labor disputes, CSO music director Riccardo Muti, one of the world’s leading conductors, visited the picket line to lend his full-throated support: “I am here with the musicians,” he declared. He urged the symphony’s board to “listen more carefully” to the players and give them the “tranquility and serenity” they need to do their work.

Increasing the urgency of this dispute resolution example, Muti was due to kick off his spring season with the CSO on May 2. Rahm Emanuel, Chicago’s unpopular mayor, would be leaving office on May 20. Perhaps spying a last-ditch opportunity to boost his legacy, the mayor—who once famously said, “Never let a serious crisis go to waste”—offered to assist through third-party mediation. Emanuel had never mediated a labor dispute as mayor, but both the musicians and the CSOA were game.

“There’s a desire and a will to try and find a resolution,” Emanuel told the Chicago Sun-Times, noting that the two sides had a shared interest in saving the rest of the CSO’s season.

On April 26, negotiators from both sides gathered at Chicago’s City Hall for a mediation led by Emanuel with help from his chief legal counsel and staff. The mayor addressed the negotiators without notes and was well versed on the dispute’s details and on contract disputes other orchestras faced, CSOA president Jeff Alexander told Crain’s Chicago Business. Emanuel, a former ballet dancer and fan of the arts, then sent the opposing parties to different rooms and engaged in shuttle diplomacy, visiting each room with proposals and ideas.

Steve Lester, a CSO bassist who chairs the musicians’ negotiating committee, told Crain’s that the mayor “set a mood of great respect for the institution, and especially for the musicians.” Through “a gradual process with a lot of give-and-take,” a deal took shape.

After eight hours, the two sides reached consensus on a five-year contract. The CSOA agreed to raise wages by 13.25% over five years, a substantial increase from its initial proposal, though short of the musicians’ demands. The musicians agreed to transition to a defined-contribution retirement plan beginning in mid-2020, with employer contributions valued at 7.5% of the base salary, plus additional payments for the first three years based on musicians’ age and years of service.

Both sides applauded the deal and the mayor’s intervention. On May 2, as scheduled, the CSO made a triumphant return to Orchestra Hall under Muti’s baton.

Notes from a Dispute-Resolution Example:

What lessons have you learned lately from dispute resolution examples?