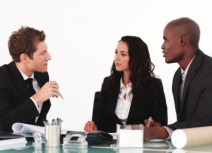 It’s said that you never get a second chance to make a great first impression, and that certainly can be the case in negotiation. A weak handshake or a gruff demeanor can color how we see someone for a very long time. Similarly, make an unambitious or poorly worded first offer, and you’re much less likely to reach your goals.

Why are first offers so influential in negotiation? In their groundbreaking research from the 1970s, psychologists Daniel Kahneman and Amos Tversky showed that when we’re asked to make a judgment in the face of uncertainty, we are easily swayed by the first figure that’s introduced into the conversation, however irrelevant, outrageous, or insulting it may seem. The first number serves as an “anchor” that’s almost impossible to forget. Not surprisingly, then, that negotiation research consistently shows that the person who makes the first offer typically comes out ahead, price-wise.

The anchoring effect highlights the importance of crafting our first offers with care. The results of two studies suggest two new and somewhat surprising ways to do so.

How precise should you be?

The fewer zeros there are at the end of your price offer, the more precise the offer is said to be. And, generally speaking, the more precise your offer is, the stronger an anchor it will be, researchers have found. Precise offers convey that you have a solid sense of the commodity’s value and are unlikely to be flexible on price. Counterparts tend to cave in accordingly.

There’s a catch, however. “Prior studies that have demonstrated a precision advantage have operated under the premise that the involved parties have already decided to negotiate,” write Columbia Business School researcher Alice J. Lee and her colleagues in a new study. By contrast, in many real-world negotiations, “first offers are presented before the involved parties begin to negotiate.” Take the case of someone comparing the prices of homes or used cars on online listing sites.

In their research, Lee and her team found that very precise offers risk scaring away potential negotiators by conveying inflexibility. In one negotiation simulation, for example, online participants playing the role of a landlord renting out an apartment perceived “renters” who made precise rent offers (such as $2,117.53 per month) as less flexible than those who made round offers (such as $2,100 per month). The landlords tended to prefer to negotiate with those who made round offers. Similarly, gathering data from the real estate service Redfin, the researchers found that the more precise the listing price on a property was, the more likely the seller was to have relisted the property at a lower price due to lack of interest from prospective buyers.

In short, the results suggest that past advice advocating precise offers needs to be modified. A round first offer is likely to entice more bidders. However, once the negotiation is in progress, you might increase the precision of your counteroffers to convey that you don’t have a lot of wiggle room on price.

Should you try a “phantom anchor”?

Precision is just one factor to consider when crafting your first offer. Another is whether to frame it in terms of a so-called phantom anchor—a figure that is not actually being offered. Here’s an example from a car seller: “I was going to ask $8,000 for the car, but I can let you have it for $6,500.” In this example, $8,000 is a phantom anchor. It’s not an actual offer but may carry the weight of one.

Given past research showing that even irrelevant or arbitrary numbers can serve as powerful anchors in negotiation, University of Pennsylvania researcher Nazli Bhatia and Johns Hopkins University professor Brian C. Gunia looked at whether accompanying an offer with a phantom offer can lend an advantage in negotiation.

The answer was a resounding yes: Across several experiments, negotiators who framed their offer relative to a phantom anchor (for example, $10,000 rather than $11,000 for a car) achieved better outcomes than negotiators who made the same offer ($10,000) without referencing a phantom anchor. Even though it’s not on the table, the phantom anchor pulls bidders’ expectations of how well they can do in its direction.

We are easily swayed by the first figure that’s introduced into the conversation, however irrelevant, outrageous, or insulting it may seem.

However, this benefit had a downside: Negotiators perceived those who dropped phantom anchors to be more manipulative than those who did not. Such perceptions could deter you from building trust and creating value.

There may be a way around this pitfall: supporting the phantom anchor with an objective standard. In another experiment, Bhatia and Gunia asked participants to imagine they were being considered for a job and told them that similar positions had been advertised on employment websites for about $55,000. Those in the phantom-anchor condition were then told, “We were planning on offering you $55,000, but we can do $60,000.” Those in the no-phantom- anchor condition were simply told, “We can offer you $60,000.” Thanks to the objective standard, the phantom anchor was viewed as less manipulative, but it was just as effective.

Overall, suggesting that you are opening with a concession from a tougher offer can help you get a better deal in negotiation. However, because this tactic can rightly be viewed as manipulative, it’s wise to use it with care. As always, keep your own ethical code at the forefront, and beware the risk of incurring your counterpart’s distrust.

“‘I Was Going to Offer $10,000 but . . . ’: The Effects of Phantom Anchors in Negotiation,” by Nazli Bhatia and Brian C. Gunia. Organizational Behavior and Human Decision Processes, 2018.