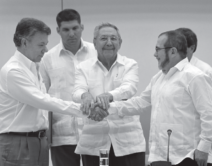 In negotiation, it’s nice to get the deal right the first time. But if carefully laid plans fall apart, you may still be able to recover. That’s what the government of Colombia and the rebel group Revolutionary Armed Forces of Colombia, or the FARC, did after their peace agreement was narrowly defeated in a national referendum.

A quest for peace

The FARC had waged its guerrilla war against the government of Colombia since 1964, fighting for Marxist rule and agrarian reforms using conventional military operations and terrorist tactics. Although the conflict gradually diminished over the course of five decades, the FARC’s fighters kept their movement alive through a profitable cocaine trade, kidnappings, and other criminal acts. Peace negotiations repeatedly collapsed. An estimated 220,000 people died in the conflict, and more than five million were displaced by it, the New York Times reports.

If Colombians longed for the conflict to end, many also wanted to ensure the guerrillas would be brought to justice for their crimes. Those twin goals proved difficult to balance as Colombian president Juan Manuel Santos launched peace negotiations with the FARC in 2012.

Following many rounds of negotiations mediated by the Cuban government in Havana, the two sides signed a cease-fire accord in June 2016 and a peace deal on September 26. In the agreement, the Colombian government promised to invest in rural development and aid the FARC in transforming itself into a legal political party with guaranteed representation in Congress. Santos’s government also vowed to grant amnesty to FARC members or give them reduced sentences for crimes. In return, the FARC said it would end its illegal drug trade, remove land mines, turn over its weapons to United Nations inspectors, and engage in community work and other acts of reparation.

As stipulated by Santos, all that was needed was for Colombians to vote to ratify the deal in a referendum. The negotiators seemed to have little to worry about, as polls suggested that support for the agreement was high.

But the polls were wrong. On October 2, just six days after Santos shook hands with FARC leader Rodrigo Londoño, Colombians voted narrowly against the peace agreement, 50.2% to 49.8%. A low turnout, caused by Hurricane Matthew, and former Colombian president Álvaro Uribe’s vocal opposition to the deal contributed to the failure. As it turned out, many voters agreed with Uribe that the deal was too soft on the guerrillas, according to the Times.

Though shaken by the loss, the two sides quickly got back to the bargaining table, determined to make adjustments to win over critics of the deal. On October 7, they were emboldened by the news that Santos had been awarded the Nobel Peace Prize in support of his efforts to end the conflict. And after Donald J. Trump was elected president in the United States on November 8, Santos was particularly keen to have an agreement ratified while President Barack Obama, a supporter of the deal, was still in office.

Negotiating around the clock, the government shuttled between conservative political leaders who had opposed the deal and FARC negotiators. In the end, the parties reached a deal that incorporates about 50 new changes designed to broaden its appeal. The revised agreement gives judges greater latitude in prosecuting drug trafficking by rebels and clearer protections for landowners in the countryside. However, it does not allow for tough prison sentences for rebels— an issue that the government believed  to be a nonstarter for the rebels—nor  does it completely bar those involved in war crimes from participating in politics, the Times reports.

With Uribe still opposing the deal, Santos didn’t risk leaving the outcome in the hands of the people again. Rather, the accord was sent to Colombia’s Congress, where Santos had strong support. On November 30, the Congress voted to ratify the deal, even as its remaining opponents walked out of the chamber
in protest.