What do FBI hostage negotiation techniques and business dealmaking have in common? Not a lot, we might assume. In workplace talks, lives are rarely at stake, and tensions seldom escalate into violence. Yet dig a bit deeper, and similarities emerge: just as in a crisis negotiation, business talks can be highly charged, unpredictable, and emotional.

In his book, Stalling for Time: My Life as an FBI Hostage Negotiator (Random House, 2010), Gary Noesner, the retired head of the FBI’s Crisis Negotiation Unit, recounts in detail the most memorable crisis negotiations of his 30-year career, including the 1993 siege at the Branch Davidian compound in Waco, Texas, and the sniper shootings that paralyzed Maryland and Washington, D.C., in 2002. Noesner sprinkles his vivid stories with the hostage negotiation techniques. With some modification, you and your colleagues can effectively adapt three of his core principles to your own talks.

In most cases, hostage takers want nothing from law enforcement but to be left alone. To resolve such situations peacefully, the hostage negotiator needs to show the hostage taker respect, says Noesner. He advises crisis negotiators to climb the “behavioral-change stairway” by showing interest, then responding empathically, which fosters rapport building, which ultimately leads to influence. Observes Noesner, “Listening is the cheapest, yet most effective concession we can make.” He criticizes authorities who put pressure on hostage takers through aggressive moves when listening might have generated a more peaceful outcome.

In the context of your own negotiations, when you’re trying to gain access to a party who seems to want nothing from you (a situation salespeople often face), you, too, would be wise to build trust through active listening and rapport building with the goal of gaining influence. 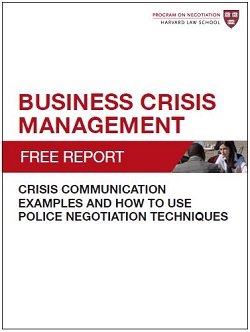 On February 28, 1993, Alcohol, Tobacco, Firearms and Explosives (ATF) agents attempted to search the Branch Davidian ranch in Waco, Texas, where sect leader David Koresh and his followers and many children resided. A gun battle broke out that left four ATF agents and six Branch Davidians dead, triggering a siege. On April 19, the FBI’s tactical unit released tear gas into the compound and punctured its walls with tanks. Fires broke out in the building. Only nine people left the building; 74 died inside, including 25 children.

In his account of the Waco siege, Noesner argues that the FBI’s tactical team acted at cross-purposes with his crisis negotiation team. Even as the negotiators succeeded in gaining Koresh’s trust and securing the release of 21 children and 11 adults, the FBI tactical team rolled in tanks, blared loud music at night, and otherwise sent mixed messages to those in the compound.

Noesner eschews this “linear approach” to crisis management, in which hostage negotiation tactics are tried first and then, if they don’t resolve the crisis quickly, dropped in favor of tactical operations. Instead, Noesner favors a “parallel approach” that combines hostage crisis negotiation and tactical operations as “two parts of the same whole.” Authorities using this approach negotiate in good faith while also preparing for and demonstrating their capability for tactical action. Too little action makes a hostage taker overly confident; too much action can trigger a firefight, Noesner writes.

The typical business negotiator or negotiating team might understand the value of beginning talks with collaborative moves but replace them with aggressive demands and threats if gains come slowly. This approach risks confusing and alienating the other party. A more fruitful strategy would be to integrate cooperative and competitive strategies throughout the entire negotiation, demonstrating both your goodwill and your resolve.

Contrary to the common perception of hostage takers as canny and goal driven, the typical perpetrator is someone who has “snapped” due to a relationship or job crisis and triggered a hostage situation impulsively, according to Noesner. Hostage takers tend to be in a highly emotional state at the beginning of a siege.

In part because the hostage taker’s rage usually subsides as time passes, Noesner and his colleagues view stalling for time as one of their primary hostage negotiation techniques. “We never put a deadline on ourselves,” he explains. As time passes, the hostage taker and the authorities become more capable of working together to develop alternatives to violence.

In business negotiations, deadlines can be useful tools. But when talks are heated, pausing for a break or scheduling a session for another day can give parties time to cool down and put them on a more constructive path.

What other advice have you found to be useful in your own high-stakes negotiations?