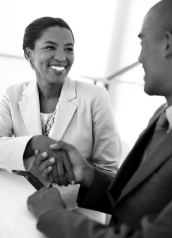 Feeling ambivalent in negotiation? No worries

Business negotiators often find themselves feeling positive and negative emotions simultaneously, such as concern that an offer won’t be received well and excitement over the offer’s potential.

We often try to squelch our emotions for fear of appearing unstable or vulnerable. Indeed, past research has suggested that expressions of emotional ambivalence—the signs of tension or conflict that show in our faces and bodies when we experience negative and positive feelings at the same time—can be dangerous in zero-sum distributive negotiations, or those where negotiators are battling over a fixed pie of resources. In such situations, counterparts tend to view ambivalent negotiators as submissive and consequently are able to dominate them.

But a new study suggests that in the more complex negotiations that are typical of our business and personal lives, feeling and expressing conflicting emotions may actually be beneficial. In their new study, Naomi B. Rothman of Lehigh University and Gregory B. Northcraft of the University of Illinois looked at how emotionally ambivalent negotiators are perceived in integrative negotiations, or those where negotiators have opportunities to create value across issues.

In one of their experiments, where participants were encouraged to cooperate, some watched a silent videotape of a negotiation in which one party (an actor) appeared either happy, angry, ambivalent, or unemotional. The participants who watched a video were told they would engage in a negotiation simulation over a new car via instant messaging with the person in the video; in actuality, they were paired with another participant who had not seen a video. During their 30-minute negotiation, the pairs of participants could potentially claim or create value across such issues as sales price, warranty, financing, and delivery date.

When participants were negotiating with a partner they perceived as emotionally ambivalent, pairs achieved higher joint value than did pairs in which the partner had expressed anger or no emotion. (When partners expressed happiness, the results were inconclusive.) Participants perceived ambivalent partners as submissive, and this submissiveness explained the pairs’ success at creating value. Expressing ambivalence may have invited assertive behavior from negotiation partners and thus helped expand the pie of resources. Thus, your conflicting emotions in multi-issue negotiations may be less of a hindrance than you might think, especially if you can set a cooperative tone.