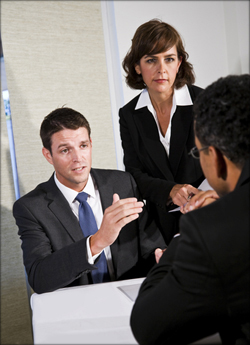 Adapted from “Learn to Negotiate with an Open Mind,” first published in the Negotiation newsletter.

After wrapping up a difficult negotiation, it’s tempting to forget about it and move on. The regret triggered by counterfactual thinking, or reflections on “what might have been,” can be so painful that many people will do whatever they can to avoid thinking about a past negotiation.

Is this a good thing or a bad thing? To answer this question, negotiation researchers have examined how counterfactual thinking affects various aspects of negotiation. In two experiments, Laura Kray of the University of California at Berkeley, Adam D. Galinsky of Northwestern’s Kellogg School of Management, and Keith Markman of Ohio University studied whether “what if?” thoughts about the past affect outside-the-box thinking at the table.

Consider that in negotiations with more than one issue at stake, parties can improve their results through creative thinking. Suppose the seller of a gas station can’t agree on a price with a potential corporate buyer. If the buyer offers stock options to the seller or offers the seller future employment, they might nonetheless reach a deal.

In their first experiment, Kray and colleagues encouraged participants to think counterfactually by asking them to imagine the feelings of a person who either narrowly won a prize or narrowly missed winning a prize by switching seats at a rock concert. When the person switched seats and lost, people tend to have the counterfactual thought, “If she hadn’t moved, she would have won.” Next, pairs of these “primed” participants negotiated the hypothetical gas station sale described earlier, which required creative thinking to reach agreement, as there was no zone of possible agreement on price alone. Negotiators who were encouraged to think counterfactually reached less-creative agreements than a control group of negotiators who were not primed to think counterfactually.

The lesson: Dwelling on what you did wrong in a recent negotiation could restrict your creativity during your next attempt. To keep your mind receptive to new ideas, envision what you might do differently to achieve better outcomes. Such thought exercises are more likely to promote creativity than thinking about simply trying to avoid your past mistakes.

No Responses to “Should You Dwell on Past Negotiation Outcomes?”