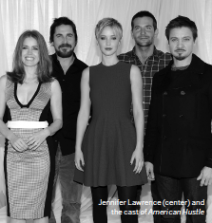 You may be adept at negotiating for your organization, but are you passing up career opportunities back at the office?

One of the more interesting tidbits to emerge from the December 2014 leaks of hacked Sony Pictures data was an e-mail revealing a young actress’s efforts to be paid on the same level as her male peers.

In a December 2013 e-mail to Sony Pictures cochair Amy Pascal, Columbia Pictures executive Andrew Gumpert wrote that actress Jennifer Lawrence’s legal representatives had complained that she was being paid only 7% of the profits of the film American Hustle, as compared with the 9% being earned by each of her male co-stars—Christian Bale, Bradley Cooper, and Jeremy Renner. The film’s other female lead, Amy Adams, was tied with Lawrence at 7%. Columbia, a Sony subsidiary, had cofinanced the film with Annapurna Pictures.

In his email, Gumpert reminded Pascal that Lawrence originally had been given 5% of the film’s take, an amount that Sony had bumped up to 7%. “There is truth here,” Pascal wrote in reply, acknowledging the pay discrepancy. Gumpert suggested that Annapurna should bear the burden of increasing Lawrence’s and Adams’s pay, if warranted.

How the negotiation initiated by Lawrence’s representatives unfolded remains unknown, but the anecdote points to some of the challenges that women continue to face in workplace negotiations: subtle, perhaps unwitting discrimination, and confusion about when and how they should ask for more.

More broadly, both women and men are often uncertain about what’s negotiable and what’s not when it comes to their careers, write Simmons College School of Management professor emerita Deborah M. Kolb and writer Jessica L. Porter in their new book, Negotiating at Work: Turn Small Wins into Big Gains (Jossey-Bass, 2015). We may bargain hard on behalf of our organization with clients and customers, yet have difficulty negotiating our pay, benefits, and assignments back at the office. Though aimed particularly at women, the advice in Kolb and Porter’s book will help negotiators of both genders gain the information, skills, and confidence they need to improve their success and satisfaction at work.

The challenges of “small n” negotiations

In Negotiating at Work, Kolb and Porter make a useful distinction between “capital N” negotiations and “small n” negotiations. Capital N-negotiations are the familiar formal exchanges over contracts and deals that we engage in with our clients and customers. In N-negotiations, we act as agents lobbying for the good of our division or organization. N-negotiations follow a somewhat predictable path: They occur at set times (such as at budget time or when a client initiates contact) and require similar skills, such as listening actively, generating options, and making tradeoffs.

By contrast, n-negotiations are the more personal and informal workplace situations in which we negotiate for ourselves. Suppose you are assigned to a new role and realize you don’t have the resources you need to fulfill it adequately. Or imagine you work for a small organization that hasn’t given you a raise in two years. Or consider Lawrence’s case, in which it seems she and her agents did not know she was being paid less than her male colleagues until the profits of American Hustle were already being distributed. In n-negotiations such as these, your counterpart may see no need for negotiation, leaving it up to you to initiate talks. Hollywood stars and others working through agents can assign their representatives to bring up such sensitive matters, but the rest of us are on our own.

Historically, women have been at a disadvantage in workplace negotiations, a trend that continues today. Though women comprise almost 50% of the U.S. labor force and are more likely than men to be college graduates, they continue to be underrepresented in leadership positions and are paid less than men. To take another example from the Sony Pictures leak, an internal spreadsheet revealed that only one of Sony Pictures’ 17 employees earning more than $1 million annually was a woman, and the male co-president of Columbia Pictures earned almost $1 million more than the woman who shared his job.

As this example and the broader employment data show, women generally have more job-related issues to negotiate than men do. In Lawrence’s case, she and her agents needed to negotiate for pay parity, but Kolb and Porter identify a range of other issues that women have to negotiate that their male colleagues may not. Given that senior leaders (most often men), for example, tend to hire in their own image, women are more likely to have to put themselves forward for jobs. When leaders assume that family responsibilities will preclude women from taking on overseas roles or traveling for work, women have to make the case for themselves.

In addition, people tend to ask women more than men to help out with low-visibility, thankless tasks, such as support roles and mentoring, Sara McLaughlin Mitchell and Vicki L. Hesli of the University of Iowa found in their research. It’s up to women to make those roles pay off by enhancing the work’s profile, ensuring they’re adequately compensated, and getting the support they need. Similarly, assumptions about who can legitimately negotiate for flexibility can inhibit men from initiating certain n-negotiations. Given the traditional gender role of men as breadwinners who put in long hours for high salaries, for example, men may be reluctant to negotiate for family leave or flexible work arrangements, such as a part-time schedule or the ability to work from home.

One of the major challenges of n-negotiations is that because you are raising issues that might be uncomfortable for others, you are likely to meet resistance. For this reason, it’s crucial to get yourself into a good position to negotiate and come prepared with creative proposals to resolve the issues you raise.

Gather information from your network

One reason we hold back from negotiating is that we don’t know what’s possible for us to achieve. By gathering information, we educate ourselves about the parameters of a negotiation and set higher goals, which often become self-fulfilling prophesies. One of the best sources of information is your network—the contacts, near and far, you’ve accumulated throughout your career.

Consider the story of Claudia, a successful Chicago-based managing director in sales for a large international bank, as described by Kolb and Porter. Claudia’s husband had taken a job in London, and they were eager to be together again. Thanks to a recommendation from her boss, Claudia was contacted by Giles, a sales VP at the bank’s London branch, about a job there that would be a lateral move for her. She wanted to negotiate the terms of the position but was hesitant because Giles didn’t seem enthusiastic about hiring her.

Claudia reached out to two of her contacts in the London office for more information. The first, in human resources, told her about a relocation package for expatriates that Claudia resolved to ask Giles about. Her second contact revealed that Giles was under some pressure to consider Claudia for the job; she encouraged Claudia to take a collaborative approach in her negotiations with him—to connect what she needed (package and support) to what was good for Giles’s division (serving the clients). The inside information gave Claudia confidence by making her feel that the issues she needed to negotiate with Giles were legitimate.

Bringing a reluctant party to the table

Once you feel legitimate about asking for more, thanks to thorough preparation, you’re ready to negotiate.

First, you need to position yourself to motivate someone to negotiate with you by making your value visible in a currency that matters to them, write Kolb and Porter. With forethought, you’ve done some of this work in advance—for example, by letting leaders in your organization know about your and your team’s achievements as they happen. But at the outset of the negotiation, making your value visible can be even more important. Lisa, an executive in business development, wanted to negotiate an expanded role for herself, something she thought her boss might resist. After she reminded her boss of her group’s performance in the last quarter, he seemed a bit more open to her ideas.

It’s also important to generate creative options and to consider the “good reasons” the other party might have for saying no to them. Take the case of Cheryl, who relocated to her firm’s corporate headquarters in Texas after being promoted to CFO. Two years in, her family was unhappy and wanted to move back to Pennsylvania. Cheryl wanted to negotiate to work long distance, but she knew her boss would be concerned about her performance and the fact that she’d be violating precedent. So Cheryl proposed what she called a “tri-office”—splitting time between the corporate office in Texas, the field, and an office in the Northeast. The arrangement could be on a trial basis, she said, with her performance evaluated according to clear metrics. Her boss agreed, and the tri-office worked so well that it became permanent. Interestingly, Cheryl not only negotiated an advantageous solution for her and her family but also changed her company’s precedent that senior leaders needed to be located at the corporate office—the type of organizational change that Kolb and Porter refer to as a “small win.”

If a potential partner remains reluctant to negotiate, you need to find ways to increase your leverage by raising the costs of the status quo. That might mean making each party’s BATNA, or best alternative to a negotiated agreement, more obvious. Armed with a strong BATNA, you may actually have more power in a potential negotiation than someone who is higher than you in the organizational hierarchy.

Take the case of Isobel, a communications manager described by Kolb and Porter, who had been taking on crisis-management work for another department’s clients in addition to her own job. Her boss would have liked for this arrangement to continue, but Isobel wanted to negotiate a promotion and restructuring to make this crisis-management work part of her portfolio. Following the advice of her mentor, Isobel forced herself to turn down the next crisis request, saying she just didn’t have the time. The client approached her boss and told him they needed Isobel’s help. Suddenly, her boss was ready to negotiate with her. As this example shows, allies can be crucial in helping you make your case.

When asked to take on a new role at work or do someone a favor, we often view such requests as yes-or-no propositions. Instead, Kolb and Porter recommend saying “Yes, and…”: “Yes, I’ll take on this assignment. And here’s what I need to do so.”

Let’s look at what happened when Alexandra was asked by her boss to help out in another division of the organization. Saying yes would have meant relinquishing leadership of a long-term project that was about to yield results. Alexandra was also concerned about her title, her specific responsibilities, and her long-term role after the “helping phase” was complete.

Rather than show great enthusiasm for the role – something she was tempted to do but didn’t feel – or asking her boss a lot of questions. Alexandra said she was not sure that she could say yes to the request but that she would like to discuss it further. Her boss, surprised, immediately asked her what it would take to say yes. As a result, Alexandra was able to convert a situation that her boss had not considered negotiable into a negotiation.