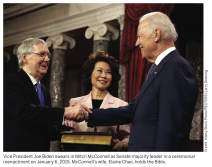 During a Philadelphia town hall a few weeks before the 2020 presidential election, Democratic candidate Joe Biden said that the first thing he’d do if elected president would be to call congressional Republicans and say, “‘Let’s get together. We’ve got to figure out how we’re going to move forward here.’ Because there are so many things we really do agree on.”

After media outlets declared him the winner on November 7, Biden may have placed those calls. It’s unlikely, however, that any Republicans answered them. With President Donald Trump refusing to accept the election results, other leaders of his party didn’t dare engage with Biden.

Rather than complaining on Twitter or issuing threats, Biden and his team launched a fierce behind-the-scenes “lobbying blitz to get Trump’s allies to crack” and accept the results, report Natasha Korecki and Christopher Cadelago of Politico. The aim: “Remove enough bricks in Trump’s wall of defenders until it collapses,” they write.

Gradually, the strategy bore fruit as, one by one, Republican senators began to grudgingly acknowledge Biden’s victory. On November 23, General Services Administration chief Emily Murphy made the official ascertainment that Biden was the “apparent winner” of the election. Soon after, Senate majority leader Mitch McConnell referred to the “new administration” at a press conference, a tacit admission of the upcoming shift in power. But McConnell and many other Republican leaders didn’t formally recognize Biden’s victory until after the Electoral College certified his win on December 14.

The Biden team’s strategy for influencing reluctant Republicans to accept the election results was consistent with the president-elect’s broader approach to negotiation, honed over 36 years in the U.S. Senate and eight as President Barack Obama’s vice president. Moderate, pragmatic, and well connected, Biden is comfortable reaching across the aisle to persuade, cajole, and collaborate.

Given the overwhelming scope of the Covid-19 pandemic and the prospect of a divided Congress, Biden scaled back his legislative ambitions as president, identifying issues where he thinks Republicans and Democrats can find common ground, including national security and the economy, as he told CNN. With Congress narrowly but deeply split along party lines, though, his goal of building bridges to “heal the nation,” as he stated in his victory speech, will be exceedingly difficult.

Biden’s past negotiations with McConnell reveal aspects of his negotiating style and hint at how— and how successfully—he’ll deal with Congress as president.

Getting a word in edgewise

If there’s one thing that Obama and McConnell can agree on, it’s that Joe Biden is a talker.

“In a town filled with people who liked to hear themselves talk, he had no peer,” writes Obama in his recent memoir, A Promised Land (Crown, 2020). Biden struck Obama as “a man without inhibition, happy to share whatever popped into his head.”

“If you ask [Biden] what time it is, he’ll tell you how to make a watch,” McConnell wrote in his memoir, The Long Game (Sentinel, 2016), quoting a favorite phrase of his father’s. McConnell described flying to Raleigh, North Carolina, for the funeral of Senator Jesse Helms with Biden and other senators in 2008: “Joe started talking the minute we got on the plane, and he didn’t stop until the moment we landed.” Biden also talked nonstop on the flight back to Washington, according to McConnell. “It was vintage Joe Biden.”

But after serving in the Senate with Biden for 25 years and getting to like him, McConnell realized that Biden “didn’t only talk, he also listened.” In 2010, with the expiration of George W. Bush–era tax cuts looming, many in Congress had attempted to negotiate a solution for months. Then McConnell and Vice President Biden teamed up— and closed a deal in days. In the end, McConnell thought he got the better of Biden, noting that Democratic leaders were “conspicuously absent the day of the bill signing.”

According to McConnell, Biden was much easier to negotiate with than his boss: Obama, McConnell said, “begins serious policy discussions by explaining why everyone else is wrong.” Biden, by comparison, appears to share McConnell’s belief that it’s best to accept and respect negotiating counterparts’ deeply held convictions, as trying to change their minds is generally a “waste of time,” McConnell writes.

In fact, Biden’s ability to negotiate with McConnell was one reason Obama had picked him as his running mate. And, like McConnell, Obama appreciated the respect Biden showed him. In May 2011, when Obama was weighing whether to authorize a raid on a compound where Al Qaeda leader Osama bin Laden was believed to be hiding, Biden expressed his misgivings and asked tough questions “in the interest of giving me the space I needed for my own internal deliberations,” Obama concludes in A Promised Land.

Relationship building has given Biden another advantage in his negotiations: a long list of people he can reach out to when he needs a favor or some advice.

Biden himself describes his sense of respect for his interlocutors more bluntly: “You’ve got to start off with the assumption that the other guy’s not an idiot,” he told New Yorker staff writer Evan Osnos, author of Joe Biden: The Life, the Run, and What Matters Now (Scribner, 2020). He also sees the value of showing empathy in negotiation: “It’s really very important . . . to communicate to the other guy that you understand his problem.”

In the Senate, Biden had learned that when he showed his colleagues respect and followed through on his promises, he could “at least expect them to hear me out,” as he writes in his memoir Promises to Keep: On Life and Politics (Random House, 2007).

Relationship building has given Biden another advantage in his negotiations: a long list of people he can reach out to when he needs a favor or some advice. After becoming vice president, Biden kept frequenting the Senate gym so he could kibitz with his colleagues. “He just gathers intelligence,” a former aide told Osnos. “He’ll call one leader, then he’ll call the leader of the other party, then he’ll call five members who are just friends who level with him about what’s going on.”

Dealmaking on the precipice

In the final days of 2012, two years after McConnell and Biden reached their tax deal, Congress and the White House were frantically negotiating to avoid a “fiscal cliff”—unpopular tax increases and spending cuts slated to go into effect in January 2013. Talks between House speaker John Boehner and Obama had proved fruitless: Boehner didn’t have enough “political muscle to strike a bargain,” and the president “alienated the Republicans he was supposed to bargain with,” the Washington Post wrote at the time.

McConnell took over, trying to engage with Senate Democratic majority leader Harry Reid. But when Reid failed to respond to his offers, McConnell suspected he was stalling to try to box the Republicans into a deal unfavorable to them.

On December 30, with a New Year’s Eve midnight deadline looming, McConnell phoned Biden, who happened to be flying at the time, and left a message: “Is there anyone over there who knows how to make a deal?” He asked the vice president to get up to speed on the issues and call him as soon as he was off the plane. The two spoke after midnight and early the next morning.

By 8:45 p.m. on New Year’s Eve, they reached a deal that enough legislators could live with. But many Democrats were reportedly “furious over Mr. Biden’s uninvited intervention” and believed McConnell “outfoxed him” by convincing him to agree to a deal they viewed as a gift to wealthy taxpayers, according to the New York Times.

Though Biden and McConnell have a strong rapport, they are very different and not particularly close. “The smiling, garrulous Biden has a reputation for empathy,” write David A. Fahrenthold and Ed O’Keefe in the Post, while “McConnell is reserved, deliberate, and calculating.”

“It’s not so much a buddy thing,” a senior Republican told the Post. “The two of them can do business. They can find solutions together.”

“He knows me. I know him. I don’t ask him to embarrass himself to make a deal,” Biden told Times columnist Thomas Friedman this past December. “I think there are trade-offs, that not all compromise is walking away from principle.”

The two do share one trait: practicality. McConnell appreciates Biden’s willingness to skip the lectures and cut deals quickly. And Biden values McConnell’s ability to assess which proposals will pass the Senate and not overpromise, according to the Post. “Mitch knows how to count better than anyone I have ever known,” Biden said at a 2011 conference at the University of Louisville. “When Mitch says, ‘Joe, I have 41 votes,’ or ‘I have 59 votes,’ it is the end of the discussion. . . . He has never been wrong.”

“There’s a reason ‘Get Joe on the phone’ is shorthand for ‘time to get serious’ in my office,” McConnell said at a 2016 tribute to Biden at the end of his vice presidency. “He gets down to brass tacks, and he keeps in sight the stakes.”

Biden in the middle

But a lot has changed in four years, and there’s a danger in reading too much into Biden and McConnell’s past negotiations. During the Trump administration, McConnell laser-focused the Senate on confirming conservative judges; passing legislation fell by the wayside. Many Democrats believe Biden would be foolish to think that McConnell will be ready to engage with him, let alone compromise, on significant issues.

Biden reportedly hopes to draw on his connections with moderate Republicans—including Susan Collins, Lisa Murkowski, and Mitt Romney— who have been “frustrated by the lack of legislative activity in the chamber,” according to the Times. “Joe has a lot of good relationships,” says Collins. “I think there is a real hunger for the Senate to begin debating legislation and start getting things done, and vote, and have philosophical decisions made on the floor.”

“There is stuff in the middle, if Biden is willing to do deals in the middle,” former McConnell aide Rohit Kumar told the Associated Press, “and that means being willing to strike agreements that progressive members [of Congress] don’t love, and maybe have them vote no, and be at peace with that.”

Indeed, Biden is likely to get pushback from progressive Democrats who are “worried and anxious” about his willingness to reach “toxic compromises” with McConnell, according to Waleed Shahid, spokesperson for the liberal political action committee Justice Democrats. Biden reportedly hopes to pacify his party’s left-most wing by exercising his executive power to unilaterally undo many of Trump’s decisions, including rejoining the World Health Organization and the Paris climate accord.

Biden might actually benefit politically from a closely divided Congress. Conservative columnist George Will argued in a November Post op-ed that Republican opposition in the Senate “could insulate Biden from progressive pressures” to pass controversial initiatives, such as expanding the Supreme Court and abolishing the electoral college and the filibuster, he argues.

Who will show up to the table?

Will Biden be able to partner with McConnell once again to resolve crises and find opportunities for mutual gain? That depends in part on “which Joe Biden governs” as president, a senior Obama administration official mused to Osnos: “The one that is sincerely open and searching for the perspectives that will help him be more effective? Or the Joe Biden that will talk at you because he thinks he has enough words and expertise to muscle through any situation?”