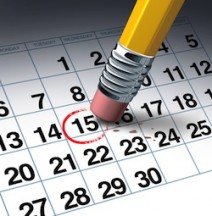 Adapted from, “Should you put off what you could negotiate today?” first published in the Negotiation newsletter, June 2012.

To reach agreement, negotiators sometimes postpone the resolution of certain issues until a later date. We look at how this practice plays out in the real world.

Remember the federal debt ceiling talks? In mid-2011, congressional Republicans insisted on significant spending reductions from their Democratic counterparts in exchange for voting to raise the nation’s debt limit by an August 2 deadline.

Following a flurry of rejected proposals, the White House and congressional leaders finally reached a bipartisan agreement, which had an interesting two-stage structure. In addition to immediately making 10-year spending cuts, the parties established a bipartisan “supercommittee” charged with recommending at least $1.2 trillion in deficit reduction.

An impasse by the supercommittee would trigger a “nuclear option”—spending cuts disliked by each side.

In November, after months of talks, the supercommittee threw up its hands; the across-the-board defense and domestic spending cuts are scheduled to take effect in January 2013. The impasse was chalked up to a host of factors, including press leaks, uncooperative negotiators on both sides, and the fact that each side was able to envision a way around the so-called nuclear option.

Multistage agreements are often promoted as an innovative way to move stalled talks forward. Yet, as this example demonstrates, rescheduling a dreaded negotiation can end up as nothing more than an artful form of procrastination. Let’s look at when it’s smart to postpone agreement on certain issues and when it’s not.

When kicking the can helps…

“Kicking the can down the road” can be an effective way to head off an impasse, writes professor Jeswald Salacuse of the Fletcher School of Law and Diplomacy at Tufts University in the Winter 2012 edition of Tufts Magazine.

Suppose you’re trying to buy out your business partner before the end of the tax year. You have come to agreement on many issues, but you have differing opinions of the value of a vacant lot you purchased together before the collapse of the real-estate market. In this case, you might write up a contract that covers your other assets and schedules a separate negotiation about the vacant lot for a specific later date, says Salacuse.

When are such delays effective? First, if you and your counterpart are under the gun to close a deal, postponing agreement on a thorny issue gives you a chance to clear your heads. By allowing yourselves ample time to focus closely on the last item on the table, you may be able to come up with more innovative solutions than you would under time pressure. Similarly, if talks have become rancorous, a break may allow tempers to cool and prompt more rational and cooperative decisions.

A delay can also reduce the impact of an onerous decision by giving parties time to find a more acceptable alternative. By postponing the deficit-reduction question, Republicans and Democrats bought some much-needed time to envision promising alternatives to agreement. In the end, each side was able to imagine a scenario, hinging on the November 2012 election results, that would buffer the nation from the hardship of $1.2 trillion in automatic spending cuts. (Whether either side’s scenario comes to pass remains to be seen.)

Postponement can be especially helpful when parties are negotiating burdens, such as hazardous-waste cleanup, budget cuts, or deficit reduction. Because we worry more about present concerns than future ones, delaying one particularly weighty decision may take some pressure off a negotiation that has become contentious and increase cooperation.

…and when it can hurt

When you’re locked in an impasse, the temptation to put off a difficult issue until tomorrow (or next year) can be great. But it’s important to consider whether postponement could truly be beneficial or if you’re simply succumbing to the very human tendency to procrastinate on difficult decisions.

A couple of guidelines can help you decide how to proceed. First, consider whether you have truly exhausted all options for resolving your disagreement on the issue at stake. Have you tried structuring a contingent contract—that is, an agreement that allows each side to bet on its different predictions? If one company in a joint venture has more optimistic sales predictions than the other, both sides might agree to reward that party in the event of a success and, conversely, compensate the more pessimistic party if sales are disappointing.

Such arrangements reduce the risk of coming to agreement on an issue where opinions differ.

Second, if postponing a decision still seems like the best option, keep in mind that it’s better to put off marginal issues rather than essential ones, according to Salacuse.

To take one cautionary example, the 1993 Oslo Accords between Israel and Palestine recognized the Palestinian right to self-government but left numerous critical issues undecided, including boundaries, the status of Jerusalem, and the right of Palestinians to return to their previous homes.

The two sides are still fighting over these questions almost 20 years later. If passions surrounding an issue seem likely to grow rather than subside with time, it may be better to resolve the debate sooner rather than later.

As the Oslo Accords also show, it can be a mistake to postpone too many decisions. Seasoned negotiators understand that the presence of multiple issues allows for the discovery of mutually beneficial tradeoffs.

When you take issues off the table—even if you’ve promised to tackle them later—you could set yourself up for less creative deals than you would reach otherwise.

No Responses to “Negotiation Skills: Should Put Off What You Could Negotiate Today?”