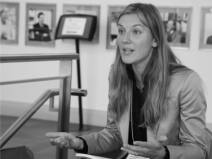 We’ve seen that people whose sacred, or morally significant, values are threatened tend to react with strong emotions that make them uncompromising. In a new study published in Judgment and Decision Making, University of Southern California researchers Morteza Dehghani, Peter J. Carnevale, and Jonathan Gratch find that our counterparts’ emotions affect how cooperative we are in value-laden conflicts.

The researchers looked particularly at anger, an emotion that tends to signal that one’s rights have been violated, and sadness, which has been linked to sympathy, need, weakness, and concern. In one experiment, participants were tasked with splitting up scarce supplies between their own (hypothetical) family and another family in the aftermath of an earthquake. The other party was actually fictitious, its responses programmed by the experimenters. The participants were told that both families were in dire need of penicillin to treat their sick babies. Because of its priceless value to “their” family, most participants said prior to negotiating that they would not trade away any penicillin; for them, it was a sacred value.

Participants made greater concessions of nonsacred supplies such as money to negotiators who appeared angry than to those who seemed neutral. Negotiators found their opponent’s anger intimidating when ordinary commodities were up for grabs. By contrast, participants made relatively few concessions on the sacred issue of medicine to angry- seeming counterparts. However, they made significantly more concessions on the sacred issue to counterparts who appeared sad, apparently because a counterpart’s sadness appeared to trigger their compassion. Thus, it may be wise to keep any anger you feel when negotiating sacred values under wraps—but not sadness, which may be rewarded.