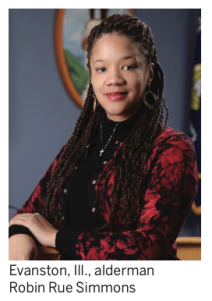 They say it pays to dream big, but when our dreams depend on other people’s funding and approval, they can easily dissolve. Drawing on savvy negotiation skills, determination, and good timing, Robin Rue Simmons, an alderman in Evanston, Ill., found a way to overcome such obstacles and make history, as Bryan Smith reported in the June/July issue of Chicago magazine. We interviewed Rue Simmons for more detail on how she spearheaded her negotiation campaign.

Home to Northwestern University, Evanston is also known for its liberal politics, tree-lined streets, and racial diversity. The population of approximately 74,000 is about 65% White and 18% Black, but the city is highly segregated, an enduring legacy of racist housing practices and policies.

In the early 1900s, White real estate agents funneled African Americans arriving from the South into a single small Evanston neighborhood, now the city’s 5th Ward. In 1919, the Evanston City Council zoned the blocks surrounding the ward for commercial use only, “effectively creating a ghetto by eliminating the possibility of residential expansion,” writes Smith. White homeowners, real estate agents, and banks all conspired to keep Blacks out of White neighborhoods through sales covenants, restrictions on loans, and other redlining measures. In the 1940s, the federal government disqualified Black Evanstonians from getting federal mortgage insurance for homes outside prescribed boundaries and even issued a map that gave each of the city’s neighborhoods a “security grade,” with the 5th Ward area getting a D.

By the time Robin Rue Simmons grew up in Evanston’s 5th Ward in the 1980s and ’90s, the city’s segregation was maintained by more subtle forms of discrimination and economic disparities. Rue Simmons loved her neighborhood, she told Smith. But when she visited a White friend’s home across town in third grade, she was startled to find the streets wider and leafier, the homes more substantial and spacious. Unsettled, she wondered why the houses in the 5th Ward were so small and cramped by comparison and why no Whites lived there.

Laying the groundwork for change

Rue Simmons, an entrepreneur and strategist, bought a home in Evanston’s 5th Ward with her family in 2010. Evanston housing prices and property taxes were skyrocketing, forcing many longtime Black residents to move away. Meanwhile, Black residents’ average income, $44,000, is about half that of White residents. Determined to make a difference, Rue Simmons ran for alderman of her ward in 2017 and won.

Years ago, another alderman had introduced a resolution acknowledging the need for reparations for Black Evanstonians for racist policies and laws. Lacking funding, the resolution remained symbolic. Reparations have long been a third-rail political issue in the United States; politicians, including Barack Obama, have expressed skepticism that the majority of Americans would ever support using tax dollars to compensate Blacks for slavery and other historical injustices that have held them back.

Rue Simmons wasn’t sure it could happen in Evanston either, but she decided to try anyway. “I felt like I had a strong foundation on our policy resolutions,” she told Negotiation Briefings. “Evanston has had hundreds of ceremonial proclamations in the name of Black Lives Matter, equality, and Black history.” It was time for the city to put its money where its mouth was, she believed.

But, where to start? “I knew that the topic of reparations was a radical one for not just our city, but for any city,” Rue Simmons told us. “As a newer elected official, I needed to come with an army behind me. My colleagues would hear me if I was coming united as one voice with many and with influencers that they respect more than me.”

Evanston’s city manager advised her to ask Mayor Steve Hagerty to appoint a committee to examine the reparations issue, but Rue Simmons was concerned the mayor’s appointments “might not have the lived experience and commitment.” Instead, in spring 2019, she persuaded the city’s recently formed Equity and Empowerment Commission (EEC) to initiate formal deliberations on the topic of funding reparations.

All the EEC’s members—two former aldermen, the pastor of a large church, and three other community leaders— were committed to advancing equity in Evanston. “This would be the most appropriate body to submit a reparations proposal to the City Council,” Rue Simmons concluded.

“As a newer elected official, I needed to come with an army behind me. My colleagues would hear me if I was coming united as one voice with many and with influencers that they respect more than me.”

Building a coalition of support

Rue Simmons and the EEC then set out to win public support. They held a series of community meetings to discuss the issue and were pleasantly surprised to find that almost everyone who attended was receptive. Rue Simmons gathered feedback from hundreds of Evanston residents and compiled it into a bulleted narrative. She and the EEC won residents’ buy-in by making commitments based on their priorities.

The leaders also worked to educate the community about Evanston’s history of racial discrimination. “I made sure the data we presented was not disputed in any corners of our community or debatable, that we all had access to it,” Rue Simmons said. “The EEC exhibited a large map showing the effects of redlining and Jim Crow laws in Evanston and Chicago that filled our hallway at the Civic Center.” The commission also shared data with the public on racial disparities within Evanston, including household income and the fact that White residents live 13 years longer, on average, than Black residents. “Think about what that means,” Rue Simmons encouraged residents. “How much income do you earn in 13 years? What legacy do you leave?”

The alderman expanded her negotiation campaign by reaching out to local leaders. Illinois state senator Laura Fine, who represents Evanston, wrote a letter of support. Rue Simmons used that endorsement “as a strong tool to ask for support from others,” she explains. The National African American Reparations Commission, a group fighting for reparations at the national level, provided a written report that backed the reparations work in Evanston while also praising the City Council and the EEC. “I knew based on who I served with and how bold the policy is that I’d need support from credible thought leaders,” Rue Simmons said. 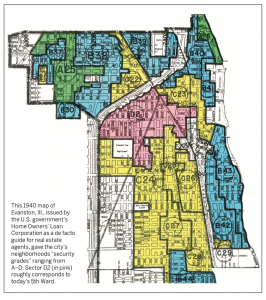 Capitalizing on a windfall

An ethical foundation for reparations was laid in June 2019 when the Evanston City Council passed a resolution acknowledging the city’s “history of discrimination and racial injustice” and affirming its commitment to ending structural racism and achieving racial equity.

Funding, however, remained a stumbling block. Residents who were enthusiastic about the idea of reparations balked at taking on new taxes.

A breakthrough came when Alderman Ann Rainey noted that Evanston would begin receiving new tax revenue once the sale of cannabis became legal in Illinois on January 1, 2020. Why not use the revenue to fund reparations? Rue Simmons asked the Evanston Police Department for a report on marijuana arrest rates in the community, which showed that Blacks are arrested far more often than Whites. “Then there was no question of how to move forward,” she said. There was a “moral logic to redirecting cannabis funds into the very community that had been hit hardest by unequal enforcement and prosecution,” writes Smith. Plus, Evanston residents wouldn’t face a new tax.

Having gathered input and support from hundreds of Evanston residents of all wards, ethnic backgrounds, and generations, as well as from local and national leaders, Rue Simmons decided it was time to present her plan to the City Council.

“Ultimately, the argument was pretty simple,” she said. “The city is committed to ending systemic racism and uplifting Black lives, and here’s a great solution to that problem. It would begin to bridge our divide to make Evanston more welcoming and livable for all. It would be a new, pure tax, not earmarked— we’re not taking it from parks, trees, infrastructure.”

At a November 2019 Council meeting, members acknowledged the hard work Rue Simmons and the EEC had done. Eight of Evanston’s nine aldermen voted to support the resolution to divert the first $10 million in cannabis funds the city received from the Illinois Department of Revenue to fund local reparations. The investment was earmarked for “housing assistance and relief initiatives for African American residents in Evanston.” Evanston had become the first U.S. city to grant reparations to Black citizens.

Putting the plan in motion

Two weeks later, about 600 Evanstonians gathered at a 5th Ward church to celebrate their historic victory and offer ideas on how to spend the reparations money. The mood was festive as actor Danny Glover gave a speech praising those who had “stood up and put their feet in the fire.”

Rue Simmons is now leading a subcommittee in charge of the reparations program that includes two other aldermen, Evanston’s assistant city manager, and the head of the city’s legal department. Residents are encouraged to attend the subcommittee’s meetings and give feedback. In addition, a facilitator is available to lead community, church, and family groups in fact-based discussions about reparations.

Rue Simmons is determined for the program to make a real difference for African American Evanstonians, who have been hit hard by the Covid-19 pandemic and recession.

Evanston expects to collect up to $750,000 in cannabis taxes annually, with distribution slated to begin in early 2021. Rue Simmons is determined for the program to make a real difference for African American Evanstonians, who have been hit hard by the Covid-19 pandemic and recession.

The subcommittee is focusing its first tranche of $400,000 on housing, given the city’s past history of discrimination, declines in its Black population, and the potential for home ownership to build intergenerational wealth. “We can sustain, preserve, and increase Evanston’s Black population by expanding and protecting home ownership,” said Rue Simmons. The subcommittee has proposed that Black home buyers who lived in Evanston while racist housing policies were in effect, their descendants, and those who can provide evidence of past housing discrimination should qualify for $25,000 toward a home purchase in Evanston. Current Black Evanston homeowners would also receive funds to improve or preserve their homes. The plan still needs to be approved by the City Council.

The following negotiation lessons from Robin Rue Simmons’ reparations campaign should benefit anyone who feels a calling to make a difference in the world: