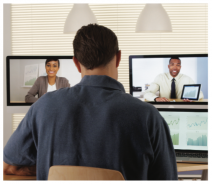 As the COVID-19 virus began to spread through the United States, Xerox CEO John Visentin announced on March 13 that the company was putting its hostile takeover of HP on hold in order to “prioritize the health and safety of its employees, customers, partners and affiliates over and above all other considerations.”

With health experts worldwide advising citizens to take social-distancing measures, such as avoiding group gatherings and staying six feet away from others, other companies chose to move face-to-face negotiations to the internet. During the virus’s initial surge, companies in China and Hong Kong started pitching IPOs to global investors online and via teleconferencing rather than flying to financial hubs such as New York City and Tokyo, according to Yahoo News.

Annual shareholder meetings are also going online. Starbucks, for example, swapped out its annual meeting in Seattle, which attracts big crowds with free coffee, for a “virtual” meeting with shareholders, Reuters reports.

Health concerns, the stock market’s plunge, and uncertainty about the virus’s ultimate toll are leaving would- be negotiators facing difficult decisions: Meet virtually, postpone talks, or avoid them altogether? Often, it is possible to forge ahead with talks, but significant foresight is required. Negotiation research and theory offer best practices for dealmaking at a distance.

Distinguishing between types of media

If you decide to negotiate at a distance, you’ll want to choose the communication media—telephone, videoconference, email, or text—best suited to your goals and needs at different points in the process.

First, the bad news: Face-to-face meetings are the superior forum for negotiation because of their “communication richness”—that is, their ample social cues. When we meet in person, we can gain understanding and build rapport through body language, eye contact, facial expressions, tone of voice, style of dress, appearance, manners, and our environment. “Negotiators leave less money on the table when they are able to pick up clear social cues,” according to INSEAD professor Roderick I. Swaab and Columbia Business School professor Adam D. Galinksy.

While no communication medium is as rich in social cues as face-to-face meetings, some are richer than others. On the phone, we can read a lot into our counterpart’s tone of voice and how quickly they get down to business. On a videoconference, we can assess the other party’s receptiveness to a proposal from their smile or, conversely, their crossed arms and frown. Emails and texts tend to be “impoverished” forms of communication because they lack nonverbal and visual cues, though emojis can help.

Communication media also vary in their synchronicity, or the degree to which people can be engaged in the same activity at the same time. Phone calls, conference calls, and videoconferences— and, to some extent, text messages— allow us to carry on a continuous conversation. By contrast, emails (and sometimes texts) tend to extend the communication process because of delays between messages, note Swaab and Galinsky.

Videoconferencing. Videoconferencing can easily appear to be the best substitute for in-person negotiation. It is a relatively rich communication medium, providing both visual and vocal cues, and it is also synchronous (though a poor internet connection can lead to delays and frustration). However, videoconferencing has several quirks that we need to anticipate, writes Creighton University School of Law professor Noam Ebner in a chapter in The Negotiator’s Desk Reference (DRI Press, 2017).

First, we appear as “talking heads” in videoconferences—that is, typically only our head and torso are visible. Thus, we see less of our counterpart and their environment than we would in person, and potentially miss out on important body language and other information. Grainy, choppy images can also make it difficult to read facial expressions. Ebner notes that it’s virtually impossible to make eye contact during a videoconference: Because computer cameras tend to be located at the top of the screen, we seem to be looking downward at our screens rather than into each other’s eyes.

Videoconferencing also tends to be fraught with technical glitches, which can interrupt meetings and cause frustration. Privacy and security concerns may also dissuade people from negotiating via video, especially when trust between negotiators is low.

To make the most of a videoconference, Ebner advises minimizing distractions by setting up our computer in a quiet area with a neutral background. Keep things professional while working from home by dressing for business. Give counterparts your full attention; resist the urge to look at your phone or otherwise multitask.

And if privacy is a concern, consider postponing talks.

Email. Because emails lack visual and vocal cues, we need to read between the lines to interpret our counterpart’s emotions and interest. Negotiations conducted via email tend to result in less creative, less satisfying agreements than those that take place in person, several studies have found. Emails can also lead to misunderstandings and conflict, and foster a sense of “mutual invisibility” that can lead us to be less courteous and considerate than we would be in person.

As a negotiation forum, email does have its benefits. Most obviously, it allows people in different time zones to communicate at different times of day. Because email gives us time to carefully craft our messages, it’s especially appealing if you feel nervous or shy, or if you’re negotiating in a foreign language. Email allows us to send large amounts of information as attachments. And when you are negotiating with someone of higher status (say, a CEO), email can minimize the trappings of power and put you on a more equal footing, research has found.

Texting. Like email, texting allows people negotiating at a distance to connect at any time of day. It also lacks visual and vocal cues, making it another “impoverished” communication media. If you’re a frequent texter, you’ve certainly noticed that misunderstandings and confusion are par for the course, especially when you’re typing quickly and autocorrect kicks in. Because typing on a small smartphone screen is effortful, we tend to keep our texts short and skip the formalities, which can make texts seem abrupt and impolite.

That said, texting can be an irresistibly convenient way of sharing an idea or offer on the fly. We can also adjust the pace of a negotiation by pausing before responding to a text. In addition, younger people report feeling more comfortable expressing their emotions in texts than through other media, according to research by Jennifer Crosswhite of the National Council on Family Relations and her colleagues.

Negotiating at more than arm’s length

For those accustomed to handshakes, business lunches, and late-night dealmaking sessions in crowded conference rooms, the following guidelines can help you adjust to negotiating during this time of social distancing: