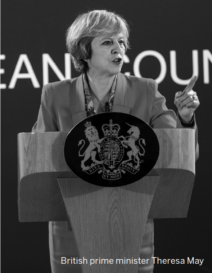 This past October, as the United Kingdom (UK) began gearing up for its negotiations to exit the European Union (EU)—a process known as Brexit—scheduled to begin in March, Reuters reported that the EU’s lead Brexit negotiator, former French foreign minister Michel Barnier, had asked for the negotiations to be conducted in French rather than English. English supplanted French as the lingua franca of multinational EU teams about two decades ago, the New York Times reports, so a switch back to French for the Brexit talks would be notable.

The news attracted attention even as Barnier denied its accuracy. “Never expressed myself on negotiation language,” he tweeted. “Work as often in English as French.” He went on to say that negotiators would agree on the “linguistic regime” only after British prime minister Theresa May launches the formal Brexit process, a plan confirmed by an EU spokeswoman.

The story was reported just a day after May attended her first EU summit in Brussels. There, European leaders, including French president François Hollande and German chancellor Angela Merkel, cautioned May to expect the Brexit negotiations to be difficult. Britain would not be allowed to keep profitable parts of its union with the UK, such as access to markets, they warned, unless it adhered to all of the obligations of EU membership, such as open borders.

May responded to reporters’ questions about the issue of the negotiating language cryptically, saying that the Brexit negotiations would be conducted “in the way that is going to make sure that we get the right deal for the United Kingdom.

Why did Barnier’s alleged request to negotiate in French create a stir?

On the one hand, whether negotiators choose to negotiate in French or English shouldn’t have a strong impact on the Brexit talks. The weighty and complicated substantive issues related to extricating Britain from the EU are likely to be more troublesome than any language barriers that arise. More than the practical implications of the choice of language, it was the signal sent by Barnier’s alleged request that made it notable. Barnier’s asking to flout convention in favor of his own language, if that’s what he did, put the UK on notice that the EU is determined to take an aggressive approach to the Brexit talks. If Barnier wanted to eschew English in favor French, he might have been seeking every advantage to keep the British on edge.

More broadly, the kerfuffle reminds us of the importance of taking time to strategize about and negotiate the process you will follow before talks begin.

In negotiation, “process drives substance,” write Robert C. Bordone and Gillien S. Todd of Harvard Law School in a past issue of Negotiation Briefings. Decisions related to the negotiation process, such as where and when talks will be held, who will attend, and how decisions will be made, can have a dramatic effect on how the negotiation unfolds. Deciding to negotiate online rather than in person could lead to miscommunication and impasse, for example. Similarly, you and your counterpart might promote an atmosphere where you can freely explore your interests by agreeing not to bring your lawyers to the bargaining table.

Negotiators often overlook the importance of negotiating process issues, to their detriment. Bordone and Todd recommend that negotiators take time to discuss in advance the details of their meeting setup (such as where they will meet and for how long, as well as whether food will be served, and so on), their agenda, the goals they hope to accomplish, and their plans for meeting those goals (for example, by discussing underlying interests and searching for mutual gains).

When you negotiate the process before negotiating substance, you improve your odds of avoiding misunderstandings, surprises, and conflicts. You are also likely to enhance all parties’ ultimate satisfaction with the deal. Our perceptions of the fairness of a negotiation process significantly affect our satisfaction with the outcome, Jared Curhan and Heng Xu of the Massachusetts Institute of Technology and Hillary Anger Elfenbein of the University of California at Berkeley have found in their research.

Opening a negotiation over process issues can help you meet the following three strategic goals:

1. Anchor talks in your favor. Much like a well-considered first offer on price, the requests you make of your counterpart can anchor the negotiation process in your favor. Asking the other party to agree to put a contentious issue on the table, for instance, should dramatically increase your odds of meeting your goals on that issue. For example, a teacher’s union might ask a school district to add the issue of teacher training days to their contract negotiations.

2. Create value through trades. The more issues that are up for discussion in a negotiation, the more opportunities negotiators have to create value through trades. Therefore, adding process issues to the list of substantive issues can be a winwin move for both sides. For example, if your counterparts want to hold talks at their office—and you don’t have a strong preference on the issue—you might grant that minor concession in return for an agreement that talks be wrapped up by a particular deadline.

3. Signal your approach. As we saw in the Brexit negotiations, the requests and demands you make on process issues (perhaps even the mere rumor of a request) can send strong signals about your approach to the upcoming negotiation, such as your intention to be antagonistic or collaborative.

For example, negotiators might signal an aggressive style by asking a counterpart for a significant process concession right off the bat, such as asking to leave an issue off the table or to hold talks in their native tongue.

Returning to the Brexit negotiations, the very choice of Barnier as lead EU negotiator sent such a combative signal to the British. Barnier has been unpopular in the UK since his days as EU commissioner overseeing the City of London financial center, a post he left in 2014. When European Commission president Jean-Claude Juncker appointed Barnier to head the Brexit talks, some British politicians viewed it as an “act of war,” according to the Times.

Signaling toughness comes with significant risks. The other party might refuse to concede on the process issue you raised, potentially leaving you with an uncomfortable choice between backing down and walking away before talks even begin. A hard-line stance also can promote a competitive orientation in the negotiation that follows, causing parties to reach an impasse or leave significant value on the table.

A better approach is to signal your intent to be collaborative while conveying your stance on key issues. If you feel strongly about a particular process issue, try to pair your request with a concession on a relatively low-cost issue. For example, in exchange for negotiating in your preferred language, you might offer to pay for the costs of an interpreter. In this manner, you signal that you will have strong preferences once formal talks start but are prepared to negotiate for them creatively.