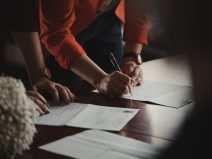 The following question about contingency contracts was posed to Katherine Shonk, editor of Negotiation Briefings and a Harvard Kennedy School and Harvard Business School Research Associate.

Lately I have been hearing a lot—both in the news and on the job—about companies using contingencies in contracts. Given that I sometimes negotiate deals that entail a lot of risk regarding how future events will play out, I am interested to know how contingencies work and how I might use them.

Contingent contracts have, indeed, been in the news recently, and you are correct to view them as a tool for managing risk. Negotiators often try to overcome their differences of opinion about how future events will unfold through persuasion techniques. A more fruitful approach might be to “bet” on your differing views. By adding incentives or penalties based on future performance to your contract, you protect both parties against risk.

When bidding for Groupon late last year, Google tried to hedge against uncertainty regarding the Internet deal company’s future performance by structuring a high percentage of its $6 billion offer as “earn-outs”—payments Groupon would receive only if it hit certain performance targets. Ultimately, this contingency was insufficient to bridge the gap between the two companies when Groupon balked over possible antitrust delays.

Here’s another recent high-profile mergers and acquisitions (M&A) negotiation you may have read about. In October 2010, the Paris-based international pharmaceutical company Sanofi-Aventis SA made an $18.5 billion, $69-per-share takeover bid for the American biotechnology company Genzyme Corp.

Sanofi was hoping to boost revenues, as patents on some of its key products were expiring. Genzyme shunned the offer, saying it was too low, and refused to open its books to Sanofi.

The differing predictions set the stage for a contingent contract in which Sanofi and Genzyme could bet on Campath’s success in the MS market. Breaking months of impasse, financial advisers for both companies began to negotiate contingent value rights (CVR) that would give shareholders an added benefit if Genzyme hit a future benchmark tied to sales of Campath.

By late December, after unsuccessfully shopping itself to other pharmaceutical firms, Genzyme reportedly was warming to Sanofi’s bid. At this writing, analysts were predicting that Sanofi would raise its bid to about $75 per share. If talks ultimately fail, Sanofi has threatened to pursue a hostile takeover by attempting to replace Genzyme’s board with members who are more friendly to its offer.

When two parties legitimately disagree about future outcomes that affect their deal, they should be willing to bet on their beliefs by negotiating a contingent contract.

Contingency contracts are common in M&A, professional athletics, and building projects. But negotiators in many other realms could benefit from betting on their differing predictions by structuring incentives and penalties rather than resorting to persuasion techniques that have low odds of success.

Have you ever had to Agree to Disagree? Let us know in the comments.

Adapted from “Agreeing to Disagree,” first published in the March 2011 issue of Negotiation.