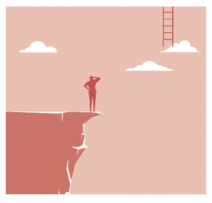 Black men and women continue to be vastly underrepresented in leadership roles in corporate America. Those who advance in majority-white organizations encounter both covert and overt bias, and often struggle to feel authentic and connected, write contributors to the new book Race, Work & Leadership: New Perspectives on the Black Experience (Harvard Business Review Press, 2019), edited by University of Virginia Darden School of Business professor Laura Morgan Roberts, Harvard Business School professor Anthony J. Mayo, and Morehouse College president David A. Thomas. Negotiation Briefings spoke with Roberts about the barriers facing African Americans who aspire toleadership roles and how we can all promote greater inclusion by using negotiation best practices.

Negotiation Briefings: Overt discrimination aside, what unconscious biases do interviewers display toward black applicants during the hiring process?

Laura Morgan Roberts: Some of the unconscious biases that lead to lower likelihood of black applicants being hired and black workers being promoted include very subtle cues about racial identity, such as having a black-sounding name. For instance, if two résumés are identical except for the name on top, the résumé with the black-sounding name is much less likely to be selected, Marianne Bertrand [University of Chicago] and Sendhil Mullainathan [MIT], as well as others, have found in their research. When black applicants show up for the interview, certain racial cues are penalized, including hairstyles. People who have an “ethnic” hairstyle are judged as being less professional and are less likely to receive opportunities, Tina Opie [Babson College] and Katherine Phillips [Columbia Business School] and others have found in their work.

When it comes to performance evaluations, compelling research by Andrew Carton of the Wharton School of Business and Ashleigh Rosette of Duke University indicates that when black leaders succeed, evaluators tend to give the credit to their team rather than to the individual. So, for instance, if a football team with a black quarterback wins a game, the media is more likely to report on what the team did right. If the team with the black quarterback loses, the media is more likely to report on the shortcomings of the black quarterback himself. The converse is true for white quarterbacks. This discrepancy likely challenges black job candidates, who may not receive full recognition for their prior leadership accomplishments.

NB: How can interviewers overcome some of these unconscious biases when making hiring decisions?

LMR: First, by naming them. In many organizational contexts, race and racial bias are becoming unspeakable. Race is a scary topic, and being perceived as racist in any form is deeply threatening to the ego and psyche of members of dominant groups, especially white leaders. So the tendency is to shy away from conversations about implicit biases that disadvantage black candidates and leaders. When we name them, we have a greater opportunity to pause before making assumptions.

Second, when evaluating a candidate’s profile, it’s important to recognize the various obstacles that many African American candidates had to traverse to get to where they are. For instance, when you’re evaluating two graduates from an MBA program, look not only at their degree and class placement but also at their journey to and through the entire educational system.

Metaphorically speaking, one student may have traveled on a smooth road with a prepaid gas card; the other student may have traveled on a dirt road and had to stop to work to buy more gas. People often debate which students have access to greater or less privilege. In many cases, racial prejudice constitutes a bumpy dirt road. This doesn’t mean you have to lower the bar for a black student who traveled this road. Rather, it means respecting and recognizing the incredible talent, endurance, and ingenuity that many African American leaders have displayed for years before they even show up at the hiring organization—and viewing it as a source of strength.

NB: What hurdles do black leaders in particular face in their organizations as a result of their race, and how might they negotiate to overcome them?

LMR: One is the experience of trying to navigate your own career path in an organization where you’re a numerical minority. In those situations, black employees feel more pressure to behave in inauthentic ways at work. They may feel they need to modify their appearance or what they share about their interests and families, and so forth, if they believe those attributes will be stigmatized, research by Courtney McCluney of the University of Virginia shows. On a personal level, I have had to learn how to negotiate with myself about my own identity and the tradeoffs I’m willing to make for the sake of advancement. We’ve heard many black leaders strategize about that type of agentic and calculated processing— which is often fraught with tension but also sometimes rather empowering. Black employees are making a set of decisions about what aspects of their racial identity they want to share at work and which they would rather not. They have to decide what tradeoffs feel most ethical, comfortable, and sustainable for them.

The other hurdle that African American leaders often have to negotiate has to do with taking on different types of job opportunities. In our book, Cornell dean Lynn Perry Wooten and Emory dean Erika Hayes James describe their research showing that African Americans are disproportionately more likely than whites to be offered and to accept “glass-cliff” CEO assignments—risky leadership positions that involve managing organizations in crisis. Again, those are tradeoffs African Americans are making to have the opportunity to lead. One interpretation is that black CEOs are more comfortable taking on such positions because many of them had to travel a dirt road with little gas in the tank to get to where they are. So, they’re not afraid of a challenge. The question they face is, “What is my BATNA [best alternative to a negotiated agreement]? This is my only option to lead. I’m going to have to take this risk because what is my alternative?”

NB: Very little negotiation research has been done on race. The negotiation research on gender often focuses on what women might do differently to get better outcomes, such as negotiating communally, in keeping with feminine stereotypes, rather than on the biases and structural barriers that are holding them back in their organizations.

LMR: Yes. The message is, “Fix yourself so that you can course-correct the bias.” And that’s the same way that race has been discussed in management studies in general.

NB: Do black people get the same advice that women do—to negotiate in a stereotypical way, whatever that might mean?

LMR: Actually, it’s different. There are two dimensions of stereotyping identified in social psychology: warmth and competence. Generally, African Americans are perceived as low on competence across the board. In some circumstances, as in caregiving positions, they’re characterized as being higher on warmth—as jovial, for instance. But in general, black men and women tend to be stereotyped as angry, overly aggressive, and greedy. So, in a negotiation context, they don’t have a set of positive stereotypes on which to draw to legitimate their requests. If the general negotiation advice is to be tough, African American professionals respond, “Yes, but not too tough because we don’t want to be perceived as the angry black man or the angry black woman and then be dismissed as overly emotional.” That’s similar to what women experience when they try to be more assertive in negotiation.

NB: In your book, Harvard professor Henry Louis Gates Jr. writes about the successful efforts of the founders of Harvard Business School’s African American Student Union to increase the representation of black students at the school in the late 1960s. But the onus shouldn’t just be on minorities. What can those in the majority do to increase diversity and inclusion in their organizations?

LMR: Our book highlights three key roles that guide the pathway toward change and that ultimately have to work together. The first key role is that of the bottom-up outsider advocate—those students who took matters into their own hands and said, “We’re tired of hearing that you can’t find qualified applicants. Just give us the support and resources, and we’ll show you how it’s done.”

The second key role is top-down, at the C-suite level. Diversity and inclusion research shows that senior management has to be onboard in a genuine and sincere way. All large corporations today have some kind of language around inclusion, but when it comes down to making real change to corporate culture, nothing really happens. People who are in positions of power have to take public leadership actions to shape the culture, determine the reward systems, and place a higher premium on diverse talent.

African Americans are disproportionately more likely than whites to be offered and to accept “glass-cliff” CEO assignments—risky leadership positions that involve managing organizations in crisis.

The third key role is that of ally. White partners need to have a level of humility that communicates they don’t know everything about the black experience but are interested and open to learning. They also need to take ownership of the problem, so it’s not just thrust upon the shoulders of the person on the margins. Allies’ most important role is as bridge builders to the dominant group. Many folks in power get fixated on retaining their power, so they presume that inclusion is a zero-sum game—“Why should I give up my seat at the table?” White allies can help organizational stakeholders view inclusion as akin to integrative bargaining, not distributive bargaining.

For example, how can we expand our resources to maximize diverse human potential? Then white allies can articulate the BATNA of failing to change: For people on the margins, what are the costs of homogeneity, exclusion, and identity suppression in organizations? Why would the CEO care if these individuals are less represented and included? Organizations often fail to articulate what they like about their BATNA—the status quo. Allies can help drive that conversation.