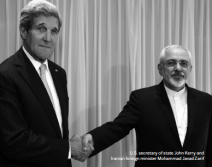 From the start, the negotiations were precarious. In late 2013, Iran agreed to temporarily freeze portions of its nuclear program and to negotiate a more comprehensive nuclear dismantlement with the United States, Russia, China, France, Germany, and Great Britain in exchange for reduced economic sanctions. The negotiations proceeded in fits and starts over the next 18 months, with the United States ultimately taking on the role of lead negotiator with Iran after a year of secret bilateral talks.

For 36 years, relations between the United States and Iran have been characterized by animosity, distrust, and conflict. Yet on April 2, the two nations were able to announce that they had reached a preliminary agreement on key issues that all parties involved could accept. The failures and successes of the preliminary deal, from which negotiators aimed to build a more comprehensive deal by June 30, offer numerous lessons to negotiators.

In our last issue, we examined the influence of potential deal spoilers in negotiation, as reflected by Republican senators’ opposition to the negotiations with Iran. Congressional Republicans didn’t succeed in scaring the Iranian team away from a preliminary deal, but they did attract enough support from Democrats to be able to negotiate concessions from the White House regarding congressional approval. President Barack Obama promised to abide by a bipartisan bill that would allow Congress to vote on any agreement reached; however, Congress would be unlikely to win enough votes to scuttle a deal with Iran, according to the New York Times.

In this article, we look at other intricacies of the U.S.-Iran negotiations that business professionals can apply to their own deal making: the search for a common language and the use of deadlines.
Finding a common language

In the halls of Lausanne, Switzerland’s Beau-Rivage Palace hotel, where the final round of negotiations took place, the U.S. negotiators spoke “in a wonderfully American way, about numbers and limits,” writes David E. Sanger in the New York Times. Meanwhile, in their media briefings, the Iranian officials “waved away” questions about numbers, instead talking almost exclusively about broader issues, namely “preserving respect for their rights and Iran’s sense of sovereignty,” according to Sanger.

The negotiators’ different preoccupations reflected the concerns of their superiors and constituents. The Iranian negotiators were eager to avoid committing to specific concessions—such as how much nuclear fuel they would either give to the Russians or dilute—that they knew officials, including Iran’s supreme leader, Ayatollah Ali Khamenei, would not accept. The U.S. negotiators, meanwhile, fought for the firm numbers they knew Congress would demand and expect. “We are all about quantifiables,” one senior American negotiator told Sanger. “They are all about symbolism, about avoiding the optics of backing down.”

If the negotiations were vastly complicated by the expectations and demands of interested parties, they were insulated by the productive working relationship that developed among the major players, including U.S. secretary of state John Kerry, U.S. energy secretary Ernest J. Moniz, and Iranian foreign minister Mohammad Javad Zarif. Staying on message in their sound bites to the press, the negotiators found a way to brainstorm proposals without attracting outside criticism: They scrawled them on a whiteboard that could be easily wiped clean—what one White House official called “a brilliantly low-tech solution,” according to the Times.

Eighteen months of on-and-off negotiations and numerous all-night sessions forged some degree of familiarity, if not trust, within the room. The fact that Zarif is U.S. educated and lived in the States for many years seems to have helped. Zarif even used the language of his Western counterparts to describe the deal that emerged, calling it a “win-win outcome.”
In both political and business negotiations, the clamor of outside voices can make it difficult to truly hear the counterpart sitting next to you. You may have to speak your coworkers’ language back at the office, but you can still work to forge a shared vocabulary with your counterparts at the table.

In 2013, when Iran first promised to freeze much of its nuclear activity and to allow international inspectors to monitor its progress in exchange for loosened economic sanctions, negotiators set a timetable for talks aimed at ironing out the dizzying array of contentious issues at stake. They pushed back this timetable repeatedly, ultimately agreeing to March 31 as a deadline for a preliminary deal framework and June 30 as the deadline for a more detailed final agreement.

As the clock ticked down in Lausanne on March 31, Kerry kept his plane idling on the tarmac. He and Moniz reached Obama via videoconference and informed him that they could not meet the deadline. The Iranians were refusing to budge on final deal terms, Kerry told the president, likely because they sensed that the deadline meant a great deal to the White House and little to Tehran.

“They were turning our own deadline against us to see if we would give ground,” one senior U.S. official told the New York Times. In the face of strong Republican opposition to the negotiations, missed deadlines could weaken Obama’s hand.

Obama told Kerry and Moniz to ignore the deadline. At the same time, he made it clear that he was prepared to declare impasse and leave the sanctions in place, even without a clock ticking down. Having dismissed the deadline, the parties pushed through and were able to wrap up an agreement two days later.

Deadlines, even arbitrary ones, can be an effective negotiating tool, motivating parties to stay on track. Moreover, contrary to conventional wisdom, it’s wise to disclose any real deadline that you face on your side to the other party, as doing so makes the deadline a shared problem, University of California at Berkeley professor Don A. Moore finds in his research.

Be aware, though, that any deadline you set may later become a bargaining chip, for better or worse. If a particular deadline isn’t very important to you, and the other side wants an extension, you might agree—but insist on a concession in return. However, a deadline could backfire on you if the other side threatens to walk out if it isn’t met.

Two final notes on deadlines: First, intense deadline pressure can make parties tense, emotional, and prone to erratic decision making. For that reason, try to set reasonable deadlines that give you plenty of time to create rapport, build consensus, and other essential steps. Second, avoid advertising your deadline widely. If you need to blow past it, observers (such as your competitors or the media) could view this decision as an indication that talks aren’t going well.