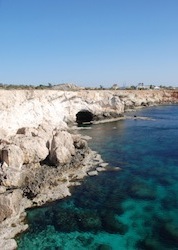 On March 19, 2013 with the economy of the tiny Mediterranean country of Cyprus on the verge of collapse, its lawmakers rejected a 10 billion euro international bailout package, leaving the nation’s president, Nicos Anastasiades, scrambling to come up with a Plan B.

Cypriot banks amassed huge losses over the past few years in its dealings with neighbor Greece. With its banks on shaky ground, the Cypriot government closed them to prevent a run on the nation’s financial institutions.

The International Monetary Fund (IMF), the European Central Bank (ECB), and the European Commission teamed up to offer a bailout package that required Cyprus to come up with a substantial portion of the funds via a one-time tax on ordinary Cypriot bank depositors. Citizens took to the streets in protest, and the parliament rejected the plan.

Writing in the Times, Hugo Dixon noted that Cyprus was left with three options: “sell its soul to Russia, default and possibly quit the euro, or patch together a new deal with the euro zone.”

Option #1, a bailout from Russia in exchange for energy industry rights for Cyprus’s potentially rich offshore natural gas reserves, would amount to Cyprus “turning its back on modernity,” according to Dixon. If Cyprus chose Option #2—to leave its banks hanging—the banks could have collapsed, yet another unappealing alternative.

Cyprus’s third, best hope was to renegotiate its deal with Europe. Ultimately, Cyprus agreed to a modified European bailout, and the government began confiscating 9.9 percent of the assets of anyone holding more than $136,000 in a Cyprus bank.

In a crisis such as this top international negotiation, negotiators are often faced with the task of exploring possible agreements on multiple fronts—and accepting that the best deal they can get may be better than no deal at all.