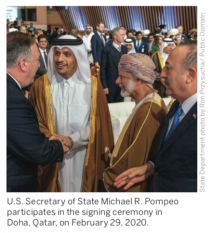 Ending the longest war in U.S. history—America’s war in Afghanistan—has been a top goal for President Donald Trump since he took office. President George W. Bush launched the war in 2001 to oust the Taliban, the Islamic fundamentalist group that controlled Afghanistan and was shielding Al Qaeda, the terrorist group behind the 9/11 attacks. Dragging on for nearly two decades at a cost of $2 trillion, the war has claimed the lives of more than 100,000 people, including nearly 3,500 American and coalition troops and at least 30,000 civilians, even as the Taliban has maintained a significant foothold in the country. President Barack Obama reduced the number of U.S. troops in Afghanistan from 100,000 to 8,600 during his tenure; Trump increased that number to 12,000 following a surge of violence early in his term. Over the years, multiple negotiations to end the conflict failed.

In late 2018, the Trump administration opened negotiations with the Taliban regarding a U.S. troop withdrawal. Proceeding in fits and starts over the next 18 months, the talks culminated in an agreement signed on February 29 that specifies a timeline for the withdrawal of U.S. troops from Afghanistan in return for limited commitments from the Taliban on security and power sharing with the Afghan government. The negotiations—and uncertainty about their aftermath—highlight the challenges dealmakers face when trust is low and impasse is undesirable.

In August 2018, U.S. secretary of state Mike Pompeo tapped Zalmay Khalilzad, an Afghan-born American diplomat who had served as U.S. ambassador to Afghanistan, Iraq, and the United Nations, to lead the U.S. negotiating delegation. Past failed efforts by other U.S. presidents to end the war had centered on negotiations with the Afghan government and excluded the Taliban, which many view as akin to a terrorist organization. By contrast, Khalilzad believed negotiations needed to include the Taliban, which continued to control large portions of Afghanistan.

The Taliban said it would come to the table only if talks excluded the U.S.-backed Afghan government, which the insurgent group views as illegitimate. Khalilzad agreed to negotiate exclusively with the Taliban after its leaders promised they would work toward stabilizing the region by negotiating a subsequent power-sharing deal with the Afghan government, the New York Times reports.

For the talks to succeed, Khalilzad knew he needed the best negotiating counterpart possible. He negotiated for Mullah Abdul Ghani Baradar, a Taliban military leader known for his diplomatic prowess, to be released from a Pakistani jail to lead talks for the Taliban.

Over the next year, the U.S. and Taliban delegations conducted nine rounds of laborious negotiations at a resort in Doha, Qatar. Khalilzad—known as “Hurricane Zal” for his relentless work ethic and commanding personality, according to the Times—aimed to put Mullah Baradar at ease by speaking to him in his language, Pashto. The two teams developed an easy rapport, but each session in Doha was grueling, lasting as long as 16 days and well into the night, the Times reports.

Outbreaks of violence between the two sides punctuated the negotiations, sometimes triggering shouting matches between Khalilzad and the Taliban’s deputy negotiator, Sher Mohammed Abas Stanekzai. The Taliban refused to agree to a cease-fire, saying it would need the United States to commit to withdraw its troops first. The two sides eventually compromised by agreeing to a “significant reduction in violence,” the Times reports. Attacks in Afghanistan dropped from 50 to 80 per day to fewer than a dozen.

Progress was slow and painstaking. It took the Americans several months to convince the Taliban to agree to name Al Qaeda in their draft agreement, which copiously avoided the word “terrorist,” according to the Wall Street Journal. And while Taliban negotiators pushed for a complete U.S. troop withdrawal within a few months, Khalilzad and his team insisted the process would take more than a year.

Aware of the likely limitations of a bilateral agreement, Khalilzad sought buy-in on key deal terms from the Afghan government and other countries in Central Asia. Back in Washington, DC, Pompeo worked to protect Khalilzad’s “tightly guarded process” when Congress asked for updates on the Afghan peace talks, according to the Times.

By August 2019, the two sides had narrowed in on an agreement that would gradually remove all U.S. troops from Afghanistan over 16 months. In return, the Taliban promised not to shelter Al Qaeda and other terrorists, and to enter into power-sharing talks with the Afghan government.

On August 30, Trump met with Pompeo, Khalilzad, and other top advisers in the White House Situation Room to discuss the tentative deal. Appearing via video from Warsaw, Poland, then–National Security Adviser John Bolton argued against closing a deal with the notoriously untrustworthy Taliban. Instead, he argued, Trump should simply withdraw 5,000 U.S. troops from Afghanistan, leaving enough forces to help with counterterrorism efforts.

When the idea of wrapping up the negotiations in Washington was floated, Trump reportedly was receptive, the Times reports. Later, the president proposed holding a secret summit between the Taliban and the Afghan government at Camp David, the site of numerous historic peace talks, just days before the anniversary of the 9/11 attacks. Trump wanted to be “the dealmaker who would put the final parts together himself, or at least be perceived to be,” according to the Times. But Taliban negotiators wanted to keep the Afghan government out of talks and wrap up the agreement before traveling to the United States.

After an American soldier was killed by a suicide car bomb attack in Afghanistan just days before the tentative summit, Trump called it off and said the Taliban would have to commit to reducing attacks for the negotiations to resume. He then tweeted about the cancellation of the secret summit. U.S. politicians across the political spectrum responded with outrage that the president had invited an armed insurgent group to meet at Camp David days before September 11. “No member of the Taliban should set foot there. Ever,” tweeted Republican congresswoman Liz Cheney.

Bolton left the White House on September 10 and was replaced by Robert C. O’Brien, with whom Khalilzad had worked closely on hostage crises, according to the Times. Strategizing on how to revive negotiations with the Taliban, they proposed a prisoner swap to demonstrate a commitment to good-faith bargaining. In November, the Taliban released two Western academics, including an American, in exchange for three commanders affiliated with the Taliban, the Journal reports. The deal built the trust the Taliban needed to agree to reduce violence as talks resumed.

By early 2020, Khalilzad and Mullah Baradar had reached a new agreement— less a peace deal than a set of preliminary commitments. The United States would withdraw troops gradually from Afghanistan over 14 months, with approximately 5,000 soldiers leaving within 135 days. If the Taliban followed through on initiating power-sharing negotiations with the Afghan government, more U.S. troops would leave. The Taliban promised to work to keep Al Qaeda and other terrorist groups from staging attacks from Afghan territory, and the two sides agreed to release a total of 6,000 prisoners. A monitoring body in Doha would check follow-through, but no verification measures or penalties were put in place to ensure compliance with the deal.

After negotiating their deal framework, the teams broke into smaller groups to plan the implementation details, which Pompeo said were recorded in a pair of classified “military implementation documents,” the Journal reports.

A ceremonial deal signing by Khalilzad and Mullah Baradar was scheduled for February 29, with “mistrust and suspicion” enduring “until ink was on paper,” according to the Wall Street Journal. Pompeo traveled to Doha for the ceremony, the first time an American cabinet official had met with Taliban leaders.

Perhaps uncertain until the last moment about whether to trust Khalilzad, Mullah Baradar waited for his American counterpart to sign the document first. While Pompeo looked on stone-faced, Khalilzad and Baradar shook hands amid the applause of the gathered audience and shouts of “God is great” from Taliban members. In a subsequent interview on CBS’ Face the Nation, Pompeo said the deal faces a “rocky and bumpy” road ahead.

Soon after the deal was signed, U.S. lawmakers were invited to view the two classified implementation documents, or so-called annexes to the deal, in a secure facility beneath the U.S. Capitol. While the Taliban has read the annexes, the Trump administration has insisted their contents be kept from the public.

The documents include an 18-month timeline, lay out the types of attacks the parties are prohibited from engaging in, and specify how the United States will share information about its troop locations with the Taliban to prevent attacks during the withdrawal, the Times reports. Just a few pages long, the annexes appear to give the U.S. government great latitude to declare an end to the Afghan war.

Calling on the White House to make the agreement public “in its entirety,” Cheney said the annexes fail to provide mechanisms needed to hold the Taliban to its promises, according to the Times. Some speculated that the secrecy was intended to mask the Trump administration’s intention of exiting Afghanistan whether or not the Taliban followed through on its commitments. The president insisted that was not the case. “If bad things happen, we’ll go back [to Afghanistan],” Trump said in a press conference.

Lessons from a difficult negotiation

The following guidelines emerge from the lengthy, challenging negotiations between the U.S. government and the Taliban: