Hostage negotiations are challenging in any situation, but the Israeli-Palestinian prisoner exchange involving Gilad Shalit in 2011 was more challenging than most.  Learning lessons from this exchange was the topic of a panel discussion, entitled “In the Aftermath of the Shalit Deal: Insights regarding Hostage-Barricade Situations and Hostage Negotiations,” held at Haifa University’s School of Laws in December 2011.

The panel featured Robert H. Mnookin, Chair of the Program on Negotiation, and Colonel (Reserve) Lior Lotan, former Head of the IDF’s hostages and MIA (Missing in Action), and was moderated by Professor Moti Mironi and Dr. Orna Rabinovich Eini.  Hosted by Dean Niva Elkin-Koren, the presentations sparked questions and remarks from a multi-disciplinary audience on various aspects of the Shalit Deal, including legal, social, and religious considerations, negotiation styles, national values and cost-benefit analysis of the deal.

Professor Mnookin, author of Bargaining with the Devil: When to Negotiate, When to Fight, reflected on the unique challenges that come from having to decide whether or not to negotiate with a sworn enemy.  Mnookin also shared some concerns that he had previously expressed in a Wall Street Journal op-ed about the dangerous precedent set by the exchange. Lieutenant Colonel Lotan spoke from his extensive field experiences, giving his own perspective on the decision to enter into negotiations when military operational releases were not an option. 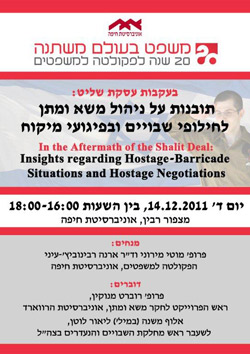