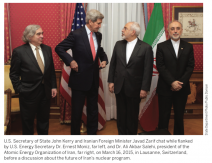 When preparing for high-stakes negotiations, organizations must decide who should lead their teams. That choice can be a difficult one, especially when trust between parties is low. Should you choose someone who will be a tough loyalist for your positions or someone who seems more capable of building bridges?

When the Obama administration and the government of Iran were preparing for top-secret talks in 2013 to dismantle Iran’s nuclear arsenal, Iran’s supreme leader, Ayatollah Ali Khamenei, appeared to lean in the latter direction: He appointed Iranian minister of foreign affairs Mohammad Javad Zarif as his government’s lead negotiator. Zarif went to college in the United States in the 1970s and has lived off and on in the States ever since. He speaks flawless English, prefers American coffee to Iranian tea, and enjoys dining out in American restaurants, according to the New York Times.

That familiarity with American ways appeared to facilitate a productive working relationship between Zarif and his chief counterparts, then–U.S. secretary of state John Kerry and Ernest Moniz, then the U.S. energy secretary. Over 18 months, Zarif and Kerry navigated the distrust and animosity that have characterized U.S.–Iran relations for decades and forged an agreement that leaders in both countries endorsed. Zarif even referred to the final deal using Western business terminology, calling it a “win-win outcome.”

Zarif’s American style made him a hero among ordinary Iranians and reformers, according to the Times, but it led Iranian hard-liners to accuse him of being a pawn of the U.S. government. Some have mocked Zarif as a “make-believe American” who resembles a comic character in an Iranian movie.

After U.S. president Donald Trump announced he would pull the United States out of the Iran nuclear deal in May 2018, criticism of Zarif and his role in the talks has escalated in both Iran and the United States.

In addition to pulling the United States out of what he called a “terrible” deal, Trump tightened sanctions on sales of Iranian oil, a move that battered Iran’s economy. Facing harsh words from Khamenei, Zarif briefly resigned in February 2019, but the supreme leader brought him back on board.

In the United States, Secretary of State Mike Pompeo described Zarif and Iranian president Hassan Rouhani as “polished front men for the ayatollah’s international con artistry.” According to this view, the Times reports, Zarif’s flawless English and cultural fluency are a shrewd cover for his allegiance to Khamenei’s hard-line agenda. Trump has requested sanctions against Zarif, who insists he has no economic interests outside the United States. And when Zarif arrived in New York this July for talks at the United Nations, the U.S. government limited his movement to a six-block area.

Critics of the Trump administration say such moves will thwart the American president’s stated interest in restarting talks with Iran by boxing in a potentially valuable negotiating partner. Meanwhile, emboldened by the collapse of the nuclear deal, conservatives in Tehran are eager for Iran to resume its nuclear-enrichment programs. While some hard-liners are open to negotiations with Trump, they do not want to work through Zarif, Abdul Reza Davari, a conservative adviser to former Iranian president Mahmoud Ahmadinejad, told the Times.

In large part, the suspicion heaped on Zarif from all quarters reflects the long history of distrust and conflict between the United States and Iran. Given the near-impossibility of forging a nuclear agreement that would survive shifting political regimes and public opinion in both countries over many years, Zarif may be both a symbol of and scapegoat for the festering hostilities between the two nations.

Even Zarif seems to view trust between his country and the United States as too lofty a goal. In an email exchange with the Times, he said he never asked American negotiators to trust him during the nuclear talks that ended in 2015 and that he never trusted them, either. The nuclear deal was built not on mutual trust, he said, but on “explicit recognition of mutual mistrust. That is why it is so long and detailed.”

So, should your lead negotiator be a bridge builder or a tough-as-nails hard bargainer? Likely, both skill sets are needed. Your chief representative’s interests need to be closely aligned with those of your organization throughout the negotiating process, but this person also should be motivated to explore his or her counterpart’s background, beliefs, and interests. Negotiators who are familiar with the other side’s culture are well-positioned to do just that.

Set team leaders up for success

The following advice will help your team leader serve your organization effectively: