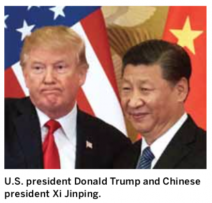 According to U.S. president Donald Trump, trade pacts forged by past American presidents have left the nation with a slew of raw deals. To reduce trade deficits, the president announced on March 1 that he would be imposing tariffs on imported steel and aluminum, a move that would impact China, Europe, and Canada in one fell swoop. To justify the exemptions to ongoing trade deals that the tariffs would require, Trump cited national security concerns.

China responded with muted criticism, while European nations threatened to retaliate. A week later, the White House said it would give Canada and Mexico temporary exemptions from the tariffs.

On March 20, Trump imposed $60 billion in tariffs on other Chinese imports. China declared it would retaliate by imposing duties of up to $3 billion on U.S. imports and cautioned the United States to “pull back from the brink,” according to the New York Times. Trump issued a temporary reprieve on the steel and aluminum tariffs for South Korea, Europe, and other U.S. allies.

The tit for tat escalated on April 1, when China imposed tariffs on more than 100 U.S. products, which led the Trump administration to slap an additional $50 billion in tariffs on other Chinese products. China once again retaliated with more tariffs on U.S. goods. On April 5, Trump said he was considering import taxes on $100 billion worth of Chinese goods in an effort to reduce the nation’s $375 billion trade deficit with China.

As the penalties piled up, the U.S. stock market slumped, and business groups called on Trump to back down, citing the potential damage tariffs could inflict on U.S. agriculture and other industries. The administration said it was open to negotiating a resolution to the dispute with China. But whether a deal could be reached before the threats escalated into a full-scale trade war remained to be seen.

One of the most daunting challenges negotiators can face is to convince a counterpart to revisit a deal that’s already in place. You may be angry about lopsided commitments or broken promises, but if an agreement is still in force, it may seem as if there’s little you can do to get the other side’s attention, short of an expensive and risky lawsuit.

Even if a contract is expiring and it’s time to negotiate a new one, the existing agreement will likely serve as an anchor that’s hard to ignore. Animosity over broken promises and perceptions of unfair treatment can make trust hard to come by. “If negotiation is about sharing expected benefits, renegotiation is almost always about allocating a loss,” Tufts University professor Jeswald Salacuse writes in his book Negotiating Life: Secrets for Everyday Diplomacy and Deal Making (Palgrave Macmillan, 2013). And negotiation research shows that we tend to be less collaborative when negotiating over losses as compared to potential gains.

To try to rebalance deals they think are lopsided, negotiators often resort to attention-getting moves such as threats and punitive measures. Trump’s steel and aluminum tariffs, as well as the additional tariffs he’s imposed on China, appear to be a case in point. Because it would take months for the tariffs to go into effect on either side, they may be intended as nothing more than a bargaining chip that easily can be negotiated away.

Indeed, this past winter, Trump used threats to compel South Korea to work quickly with his administration to revise the nations’ bilateral trade agreement. We take a closer look at this negotiation and suggest strategies for business negotiators who feel similarly trapped in a bad deal.

Since the U.S.–South Korea free trade agreement, known as KORUS, took effect in 2012, America’s trade deficit with South Korea has doubled. Trump warned he would back out of the deal and reinstate the threatened steel tariffs if South Korea didn’t agree to negotiate more favorable terms. South Korean officials traveled to Washington, D.C., in February to try. Time was of the essence: The two countries had scheduled separate talks with North Korea regarding its nuclear program in the spring and wanted to be able to present a united front when facing off with North Korean leader Kim Jong-un.

But the U.S.–South Korea talks on KORUS got off to a rocky start. U.S. negotiators “kept asking us to make concessions unilaterally,” which left the mood “as cold as Siberia,” South Korean trade minister Kim Hyun-chong later recalled on Facebook. South Korean negotiators felt stuck. The threat of a canceled trade deal “would have been an absolute nightmare,” one South Korean official told the New York Times. But without a concession from the United States, South Korea would have difficulty selling a renegotiated deal to its people. Talks eventually stretched from one week to four.

Ultimately, Trump’s threatened steel tariffs “provided an opening,” the official told the Times. South Korea offered to give U.S. automakers and pharmaceutical firms greater access to its market in exchange for becoming the first country to officially be exempt from the steel tariffs. “We made concessions in autos that we saw as inevitable anyway,” the South Korean official said. “This suddenly becomes a win-win.”

After the breakthrough in late March, “our relations developed into something like a bromance,” according to Kim. Trump praised the deal but said he might delay its signing until after reaching an agreement with North Korea on denuclearization. U.S. officials reportedly are concerned that South Korea may not push the North hard enough in its talks. Using the unsigned trade deal as a trump card, so to speak, might help the White House motivate the South to stay in lockstep on North Korea.

Guidelines for redoing the deal

At this writing, the U.S. trade deal with South Korea is unsigned, and the future of U.S.–China trade relations is up in the air. Still, the developments thus far lead to some useful conclusions about renegotiation, which we combine here with more general advice from Tufts professor Salacuse. The first two suggestions are aimed at helping you avoid the need to renegotiate by setting up a better deal the first time around. The remaining three tips focus on getting your counterpart back to the table and securing better terms.

1. Insist on short-term contracts, when possible. In 2008, the City of Chicago, under then-mayor Richard M. Daley, negotiated a 75-year deal that sold rights to lease the city’s parking meters to a private company for $1.2 billion. It soon became evident that the Daley administration, focused on filling a $500 million hole in the municipal budget, had sacrificed billions of dollars in revenues over the life of the contract. After replacing Daley in 2011, new Chicago mayor Rahm Emanuel pursued negotiation, arbitration, and litigation to try to get a better deal from the private company, Chicago Parking Meters, but due to the length of the contract, the damage was largely done. The lesson is obvious: Whenever possible, negotiate relatively short-term contracts so that you can periodically start over from scratch.

2. Prepare for disagreement. Even when the duration of your contract is reasonably short, you can expect misunderstandings and disagreements to crop up periodically during the implementation stage. Prepare to manage conflict effectively by adding a dispute- resolution clause to your contract. By requiring that parties engage in negotiation or mediation for a period of time before filing a lawsuit, you may be able to resolve disputes relatively quickly and inexpensively while also providing opportunities to negotiate better terms. It’s also wise to agree to meet periodically throughout the life of the contract to find out how things are going and make adjustments before conflict escalates.

3. Think twice before you threaten. What’s the best way to convince an unmotivated party to renegotiate? For Trump, threats of noncompliance and punishments have been the obvious solution. Indeed, the threat of noncompliance and tariffs appeared to be effective at motivating South Korea to renegotiate KORUS and agree to meaningful concessions. The threat of tariffs even allowed South Korea to save face with its citizens: It was able to offer concessions to the United States in exchange for the Trump administration backing down from the threat.

But while threats, sanctions, and penalties can indeed be attention-getters, they come with significant risks. As we’ve seen with China, rather than backing down, the other side may retaliate with threats and punishments of its own. The situation can escalate to the point that renegotiation seems virtually impossible.

4. Promote joint problem solving. Rather than making threats, you might instead ask the other party to agree to a sit-down to hear your concerns. Describe how the difficulties you’re facing are affecting the other party, and outline how improvements would help both sides. Above all, try to promote an atmosphere where you can engage in joint problem solving, recommends Salacuse. Take time to listen to each other’s concerns with the current contract and brainstorm solutions that would meet both parties’ interests.

5. Find linkages across deals. You might also compel a partner to renegotiate by looking for connections to other deals. Rather than immediately signing the new trade pact with South Korea, for example, Trump is seeking to make it contingent on China’s progress with North Korea.

Another deal that could give the White House leverage in negotiations with China is the Trans-Pacific Partnership (TPP), a trade agreement the Obama administration entered into with 11 other nations in 2015. Calling the TPP a terrible deal, Trump pulled the United States out of it soon after taking office. On April 12, he proposed reentering it, recognizing that the United States could gain negotiating leverage with China through increased trading with some of its competitors, including Japan and Singapore.

Along these lines, you might persuade counterparts to renegotiate an existing deal by linking it to future business between your organizations or by partnering with their competitors.