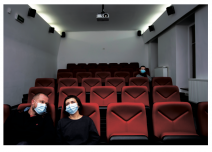 In recent years, the U.S. film industry has avoided dealing with a mounting inefficiency. Historically, theater companies have negotiated with film studios for the right to screen movies for three months before they can be released in other formats, including streaming, on demand, and DVD. Staggering the release of films in different formats has benefited studios by allowing them to get “multiple bites out of the same apple,” a movie theater operator told CNBC. But with the rise of streaming services, many in the industry believe the so- called three-month theatrical window is too long. If people prefer to watch films from their couches, why not get them out sooner?

Theater companies have been dead set against reducing the theatrical window, fearing it would eventually slam shut and put them out of business. So studios have tried to negotiate piecemeal changes, shortening the window for films here and there.

But it wasn’t until the Covid-19 pandemic struck and movie theaters went dark that the industry took a more proactive approach. As we’ll see, a unilateral decision by one company set off a firestorm—and a slew of emergency negotiations. The case highlights why sometimes it’s important to negotiate with key partners even when a decision seems to be yours to make.

When the pandemic struck last spring, film studios repeatedly pushed back the theatrical release dates of big-budget films in response to quarantine and social-distancing measures. Around the same time, a number of new streaming services debuted, including Disney+, HBO Max, Peacock, and Apple TV+. With everyone staying home, the appetite for content seemed insatiable.

“Hollywood was forced to reckon with a situation it had been avoiding for at least five years: Theaters can’t have a months- long stranglehold on new movies anymore,” writes Joan E. Solsman on CNET. Some studios, including Universal Pictures and Disney, began releasing a small number of new films on streaming services. Disney, for example, negotiated with the creators of Hamilton to premiere their filming of the stage play on Disney+.

A turning point came in July when, on the verge of bankruptcy, theater chain AMC reached a deal with Universal. They agreed to shorten the theatrical release to 17 days for smaller Universal films and keep it at 31 days for big-budget releases. In return for the concession, AMC negotiated a cut of earnings from premium on-demand revenue for smaller films. “The theatrical window has been shattered, and it’s a pretty good bet that it will never be patched back together,” Variety reported. Universal went on to reach similar deals with Cinemark Theatres and Canada’s Cineplex.

In September, Warner Bros. tested the public’s willingness to venture into theaters by launching director Christopher Nolan’s sci-fi thriller Tenet. It bombed. Changing course, Warner announced it would debut Wonder Woman 1984 in theaters on Christmas Day and then on HBO Max just one day later.

On December 3, Warner Bros. rocked the film industry by announcing that it would release its entire slate of 2021 films—17 in all—on HBO Max within the United States on the same dates as their theatrical releases, at no extra cost to subscribers. The 17 Warner films include Lin-Manuel Miranda’s In the Heights, Godzilla vs. Kong, Dune, and The Matrix 4. Warner chairman Toby Emmerich declined to predict whether the company would revert to the traditional 30-day theatrical window after the pandemic subsides.

The news was a blow to theater chains, some of which were on the brink of bankruptcy because of low or nonexistent ticket sales. To their dismay, Warner had not negotiated any financial arrangements with them before the announcement. “We will aggressively pursue economic terms that preserve our business,” AMC CEO and president Adam Aron said in a statement.

The filmmakers, actors, producers, and agents behind the 17 films were also blindsided. Their back-end profits depend on box-office receipts, which would now be far lower than anticipated. And some of the directors were furious that the decision likely meant few viewers would choose to see their creations on the big screen.

“Warners has made a grave mistake,” one top talent agent told the Reporter. “Never have this many people been this upset with one entity.”

The controversial decision can be traced back to AT&T’s purchase of Time Warner, which it renamed WarnerMedia, in 2018. WarnerMedia owns both Warner Bros. and HBO Max. Launched in May 2020, the streaming service is a key component of AT&T’s wireless business, as it is bundled into some of its phone and internet packages. HBO Max “exists, in part, to create consumer loyalty to AT&T,” writes Edmund Lee in the New York Times. But at a price of $15 per month, HBO Max has struggled to attract subscribers.

WarnerMedia higher-ups, including CEO Jason Kilar, appeared to make the calculated decision to sacrifice billions in box-office sales this year to prop up HBO Max, according to the Times. Given that WarnerMedia generates only half of AT&T’s $71 billion wireless-service business, the wireless business appeared to take precedence over the film business. And with the pandemic still raging on in the United States, there was no guarantee that Warner’s 2021 films would perform well in theaters anyway.

Keeping it out of court

AT&T CEO John Stankey called the strategy a “win-win-win,” according to the Times. But the creators of Warner Bros.’ 2021 films didn’t see it that way, especially since they weren’t invited to any negotiations before the decision was announced.

WarnerMedia had given the movies to its own streaming platform rather than allowing producers a chance to shop their films to other streamers. That raised questions about self-dealing.

They were also aware that when Warner Bros. decided to truncate Wonder Woman 1984’s theatrical release, the company “had to shovel tens of millions at [star] Gal Godot and other key players” so that they would be willing to sign up for a third film in the series, according to the Reporter.

The talent behind Warner Bros.’ 2021 films now expected their due. And they had a legal rationale for making demands: WarnerMedia had given the movies to its own streaming platform rather than allowing producers a chance to shop their films to other streamers. That raised questions about self-dealing. Threatened with multiple lawsuits, Warner Bros. has been in “countless” settlement negotiations with talent agents and producers, according to Deadline. (For an example, see the sidebar below.)

Back in the pre-pandemic era, film production company Legendary Entertainment financed the bulk of monster movie Godzilla vs. Kong and sold distribution rights to Warner Bros. But when the health crisis hit, Warner Bros. repeatedly pushed back the film’s theatrical release date. Netflix offered to purchase the film from Legendary for about $225 million, but Warner Bros. blocked the sale.

Legendary then asked Warner Bros. to negotiate a deal to stream the film on HBO Max. It received no answer—until Legendary executives found out on December 3 that Warner Bros. planned to air the film on the streamer without any money changing hands, writes Kim Masters in the Hollywood Reporter. After Legendary threatened to sue, the two reportedly reached an undisclosed settlement that will allow the film to be released in theaters and on HBO Max in March.

Despite the widespread disruption and anxiety within the industry, “the movie theater is not dead,” writes Sarah Whitten of CNBC. “Theatrical windows remain a potent financial formula that yields plenty of fruits in its downstream revenues,” according to Anthony D’Alessandro of Deadline. “We had a $13 billion box office last year,” Disney CEO Bob Chapek said during Disney Investor Day in December 2020, “and that’s not something to sneeze at.”

Industry experts predict the theater industry will consolidate during and after the pandemic, and come back smaller. In Australia, China, and Japan, where Covid-19 rates are low, people are flocking back to theaters.

For all parties involved, updating their business model will require not only strategic thinking but also a willingness to negotiate, even when negotiation isn’t legally required. By making a surprise announcement rather than reaching out to key long-term partners, Warner Bros. turned what should have been standard business negotiations into rushed, antagonistic, and costly efforts at conflict resolution.

The takeaway? Even if you have abundant power and the legal authority to make unilateral decisions, it pays to try to negotiate buy-in from your counterparts. Trying to bulldoze over them is likely to damage or even end the relationship.