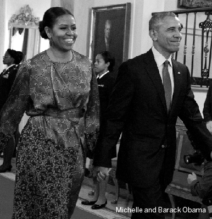 When you have multiple negotiations to conduct with one or more partners, should you combine them into one big deal? In negotiations for the sale of new books by Barack and Michelle Obama, the answer was an emphatic yes.

When famous political figures have a book to sell, they turn to one person: Robert B. Barnett. Far from a traditional New York publishing agent, Barnett is a partner at the Washington, D.C., law firm Williams & Connolly. He spends much of his time representing corporate clients in negotiation and litigation but has fostered a healthy “side business,” as he calls it, representing prominent politicians in their book auctions and negotiations with publishers, writes Harvard Business School and Harvard Law School professor Guhan Subramanian in his book Dealmaking: The New Strategy of Negotiauctions (W. W. Norton, 2011).

Luminaries on Barnett’s client list include Bill and Hillary Clinton, George W. and Laura Bush, and Tony Blair, not to mention numerous U.S. senators and secretaries of state. Rather than charging his clients 15% of their earnings (including book advances and royalties), as most literary agents do, Barnett bills by the hour, an arrangement that can save his clients considerable money. (Barnett has yet another side business with politicians: He helps with their debate preparation by playing their competitors, including Dick Cheney and Bernie Sanders, in practice debates.)

So when the Obamas returned to Washington, D.C., from their post-presidential vacation earlier this year, it wasn’t surprising that one of their first orders of business was to arrange for Barnett to sell the books they are planning to write, which are expected to be memoirs of their time in the White House.

Barnett follows a very similar script with all his book clients. First, he accompanies his latest superstar politician on a tour of the major publishers in New York City, where the politician describes the book to “swooning editors,” according to Subramanian.

Next, Barnett gives the editors a letter describing the rules of the auction that will take place, which are the same every time, writes Subramanian. Specifically, Barnett instructs interested bidders to submit their offer in writing to him by a certain date in as much detail as possible. They are instructed to reveal the size of the advance they are willing to offer, a payment schedule, information on royalty levels, a description of how much they are willing to commit to advertising and promotion, and other financial and marketing details.

In the world of trade publishing, authors and their agents typically negotiate an advance from their publishers to be paid before or upon delivery of a book, or in installments. Often, books fail to sell well enough for the publisher to recoup the money paid out for the advance. If a book does earn back its advance, the publisher then begins paying the author royalties—a small percentage of earnings, such as $2 on a $25 book—for each book subsequently sold. In effect, a publisher counts on bestsellers and other successful books to subsidize those that sell less well.

Barnett’s letter explains to publishers how the auction will unfold: “On [date], I will call the low offeror and ask if he/she will top the high offeror. That process will continue for as long as necessary.” It’s a simple, straightforward auction process.

Executives at top publishing houses met separately with the Obamas in February, according to the New York Times. Interest was likely at a fever pitch. Memoirs by departing presidents typically sell very well, earning back even high advances. Bill Clinton won a $15 million advance for his memoir, My Life, and George W. Bush earned $10 million for his, Decision Points.

There was reason for publishers to hope that the first African American U.S. president’s memoir could prove to be not only a hit, but an enduring classic. Obama’s two published memoirs, Dreams from My Father and The Audacity of Hope, were runaway bestsellers that have earned more than $10 million combined and secured his reputation as an introspective prose stylist. (While in office, Obama also wrote a successful children’s picture book, Of Thee I Sing: A Letter to My Daughters, and donated his share of the proceeds to a scholarship fund for children of fallen and disabled soldiers.)

Early in the negotiation process, it appeared that Barnett, working this time in tandem with another Williams & Connolly partner, Deneen C. Howell, was going to auction the Obamas’ books separately. At some point that changed, however, and the two books were combined into one deal, the New York Times reports.

The prospect of a joint book deal “propelled the auction to record-breaking levels and has set the publishing industry alight,” according to the Financial Times. HarperCollins, Simon & Schuster, and Penguin Random House reportedly all competed with opening offers for the two books (combined) in the $18 to $20 million range.

On February 28, the news broke that Penguin Random House was the winning bidder, with a staggering offer for the
two books: $65 million. Even with the sum divided between the two books, it was a record-breaking amount for a presidential memoir, according to the Financial Times. The fact that Barnett and Howell charge by the hour, rather than shaving off the standard 15%, likely saved the Obamas millions, according to the Associated Press.

In addition to winning a record-breaking advance for their political memoirs, the Obamas negotiated for Random House to donate one million books in their family’s name to First Book, a nonprofit that provides books to disadvantaged children. They plan to donate part of their advances to charity, including their newly formed Obama Foundation.

A Penguin Random House spokesperson said that the publisher looked forward to working with the Obamas to “make each of their books global publishing events of unprecedented scope and significance.”

Was the winner cursed?

The Obamas’ choice of publisher was not a great shock, given that Penguin Random House had published all four of the Obamas’ previous books, but the size of the bid raised eyebrows. Did the publisher have any hope of recouping such a staggering advance? Or would Penguin Random House be a victim of the “winner’s curse”—the tendency for the winning bidder in an auction to be the one who most overestimates the commodity’s value?

The fact that Penguin Random House bought worldwide rights to the books should help it avoid the winner’s curse. The Obamas remain popular abroad, and overseas interest in their books is expected to be significant.

Moreover, the former president, who is said to have kept a journal while in office, has already proven his ability to deliver profitable books. Even as Republicans work to dismantle signature legislation and initiatives from Obama’s presidency, the book will give Obama a chance to highlight his legacy—and perhaps settle some scores. And although Michelle Obama’s only book to date, American Grown, was about the White House garden, interest in the reminiscences of the popular first lady is also expected to be high.

In the end, Penguin Random House may have been willing to take a gamble on overpaying for the chance to burnish its reputation by securing the Obamas’ post White House memoirs.

3 guidelines for reaching a happy ending: