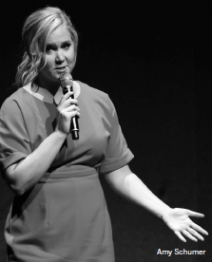 Dissatisfied with her first book contract, comedian Amy Schumer canceled it and negotiated a different one.

A better strategy? Lessen your odds of disappointment from the start.

In 2012, David Hirshey, senior vice president and executive editor of publisher HarperCollins, saw Amy Schumer’s stand-up comedy act and was so impressed by the rising star that he offered her a $500,000 advance to write a book, reports Alexandra Alter in the New York Times. Schumer accepted, saying she wanted to write a collection of personal essays.
Several months passed, however, without Schumer signing her contract. HarperCollins began to get nervous.

Eventually, Schumer’s literary agent, Yfat Reiss Gendell, told Hirshey that Schumer was interested in considering bids from other publishers. When one of them offered her $1 million, HarperCollins matched the bid. Schumer finally signed a contract with the publisher in the spring of 2013, around the time her TV show, Inside Amy Schumer, launched on Comedy Central.

With the help of a New Yorker staff writer, Schumer penned a few essays, but progress on the book stalled as her career kicked into high gear. In spring 2014, Gendell informed Hirshey that Schumer was too busy to work on the book and wanted to cancel the contract. The comedian returned her advance with interest, according to the Times, and also parted ways with her agent. In a GQ interview in July 2014, Schumer said of the book deal, “I decided to wait. I thought I would make more money if I waited.”

Have you ever regretted a negotiated agreement? Maybe you committed yourself to a difficult partner or got involved in a venture that wasn’t paying off as expected. Or maybe, as appears to have been the case for Schumer, you couldn’t stop thinking about the better deal you might have gotten if you had been more patient.

Regret is a common emotion for business negotiators. Because our satisfaction with our negotiated outcomes is highly subjective, circumstances may lead us to feel regretful even when we get an objectively great deal. In addition, we may go out of our way to avoid feeling regret in the future. Negotiators in one study sacrificed value simply to avoid receiving feedback that might make them feel regretful about their choices, professors Richard Larrick (Duke University) and Terry L. Boles (University of Iowa) found.

As you’ll see, Schumer rebounded from her first book deal to go on to make a bigger, better deal. Her story reminds us of the importance of taking steps to improve our satisfaction so that broken contracts aren’t necessary; it also suggests how to get out of a weak deal with grace and courtesy.

By early 2015, the year after Schumer canceled her book deal, her career was red-hot. Her TV show had been nominated for seven Emmy awards, and the film she wrote and starred in, Trainwreck, was a critical and box office hit. Meanwhile, thanks to the literary success of comedians such as Tina Fey, Amy Poehler, and Mindy Kaling, publishers were eager to sign comics to write autobiographical books. The timing was right for Schumer to do a new and better book deal.

The comedian hired a new literary agent, David Kuhn, to help her sell the book of autobiographical essays she’d begun for HarperCollins. Interest in The Girl with the Lower Back Tattoo was so intense that an auction was in order. Rather than sending out the proposal and risk having its content leaked, Kuhn “stoked the competition and interest” by requiring potential bidders to meet with him privately, according to the website Deadline Hollywood. Only in Kuhn’s office were editors allowed to read the highly confidential proposal.

In the lead-up to the 2015 Emmy Awards, the bids for Schumer’s book came in fast and furious. On September 21, the day after she won an Emmy, a last-minute frenzy spiked the bidding well above $5 million. Gallery Books, an imprint of Simon & Schuster, ultimately won the prize for an undisclosed figure estimated to be in the $8–$10 million range. Schumer had topped her earlier book advance by $7 million or more and also set a new record among her comic peers for the highest advance.

Getting the deal right the first time

Schumer was able to cancel a disadvantageously timed contract and negotiate one that suited her better when conditions were more favorable. But as we discuss below, this type of redo is tough to pull off in most business contexts. To avoid the need for a do-over, we need to increase our odds of getting the right deal from the start.

In negotiation, our decision making is often marred by impulsivity, which leads us to give too much weight to intuition, emotion, and immediate concerns. It’s easy to see how a $500,000 book deal may have seemed irresistible to a comedian who was just hitting her stride and was unsure where her career was headed, for example. Only on deeper reflection do we become capable of grasping the long-term implications of our choices.

The clearest path to reflection is to give yourself plenty of time to make decisions and negotiate. A methodical pace will allow you to build trust and rapport with the other party, take stock of her merit as a long-term partner, assess the best deal you can get, and thoroughly assess your alternatives and the potential risks.

As negotiators, we can also override the tendency to lean on intuition by engaging in rigorous, rational decision analysis. In their book Smart Choices: A Practical Guide to Making Better Decisions (Harvard Business School Press, 1999), John S. Hammond, Ralph L. Keeney, and Howard Raiffa present guidelines that will help negotiators and decision makers in other realms improve the quality of their decisions and, consequently, reduce their odds of experiencing regret.

Specifically, the authors encourage you to follow these eight steps, which we illustrate with a hypothetical job seeker’s decision-making process:

1. Clearly define the decision you are facing (for example, deciding which job to accept).

2. Determine your explicit objectives (such as “To accept a job in my field that will maximize my time with my family and allow me to pay off my student loans within five years”).

3. Envision a range of imaginative alternatives for meeting your goals (“Instead of working in my field right away, I could wait tables to pay my loans off faster”).

4. Identify the consequences of each option to determine which options meet all your objectives best (“Waiting tables would require me to work nights, which would minimize my time with my family”).

5. Weigh the tradeoffs associated with various options (“Firm A pays less than Firm B but requires less travel”).

6. Identify uncertainties and risks (“As a start-up, Firm A could easily fail, but there is a small chance of a big payoff”).

7. Think about your risk tolerance (“I’d have serious regrets if Firm A collapsed after I’d taken a below-market salary for a couple of years”).

8. Consider linked decisions (“If I sign with Firm B, we likely would have to move closer to its headquarters in a few years”).

Though the future will always be uncertain, you can reduce your odds of regretting a deal by imagining the range of possible outcomes and determining which outcomes you can live with and which ones you can’t. You can perform decision analysis on your own, or you could enlist an expert trained in such tools, such as a financial adviser or lawyer, to guide you through it.

Should you undo the deal?

Suppose you come to have serious regrets about a deal. Should you walk away or tough it out?

You should always consult with your lawyer or legal team when considering such an important and potentially risky decision. Whether you realize it or not, your initial contract likely spelled out how you must make the other party “whole” if you breach the contract, such as paying a penalty. Schumer returned her advance with interest to HarperCollins after she decided not to work with the publisher, for example. If you want to get out because the other party has violated the terms of your contract—for example, by engaging in fraud or failing to meet its obligations—then your lawyers can advise you on next steps.

When the other party is not at fault, keep in mind that a canceled contract could cause her great hardship. For example, if you supply a part that a company needs to manufacture its signature product, your decision to walk away could devastate its business. In such cases, a broken contract could not only end the business relationship but also prompt a lawsuit, damage your reputation in your industry, or both. A better course in such situations may be to explain why you are dissatisfied with the contract and try to negotiate better terms.

At other times, you and your legal advisers may conclude that your counterpart would not be seriously harmed by an undone contract. Schumer, for example, had second thoughts about publishing with HarperCollins well before the company had committed significant resources to her book, such as production and marketing expenses.

If your partner would be only minimally harmed by a canceled deal and you would benefit greatly, he may well understand and even support your decision to move on. Hirshey, the editor who won Schumer’s first book auction only to see the deal crumble, joked that he was “thrilled to cost one of our competitors $9 million.” He added, “In publishing it sometimes makes sense to be behind the curve rather than ahead of it.”

3 more lessons from a deal do-over