What’s our leverage? U.S. Senate minority leader Chuck Schumer asked himself that question continually during the congressional recess this August, he told the New York Times, following the Republicans’ multiple failed attempts to repeal the Affordable Care Act. By answering that question, Schumer and House minority leader Nancy Pelosi were able to set up their party for potential year-end wins—with help from an unlikely counterpart.

As the minority party in both the House and Senate, the Democrats had been consigned to the sidelines on key legislation, only to watch the Republicans repeatedly succumb to deep internal divisions. Schumer wanted to identify an issue that Senate majority leader Mitch McConnell and House Speaker Paul Ryan felt they needed to pass but couldn’t on their own because of their divided caucus. In exchange for votes on such an issue, Democrats might be able to win concessions on their own priorities, such as protection for young undocumented immigrants.

There was such an issue, Schumer and Pelosi agreed: the debt ceiling. With the U.S. Treasury set to exhaust its borrowing authority on September 29, Congress would have to vote to allow the nation to take on further debt by that date to avoid a fiscal catastrophe. McConnell and Ryan were anxious to do so, as were Schumer and Pelosi.

But congressional conservatives wanted the debt-ceiling suspension to be tied to spending cuts or fiscal reforms. Although the House might have been able to pass such a bill without Democratic support, the Senate likely would not, the majority leaders understood. Treasury Secretary Steven Mnuchin and others in the Trump administration lobbied McConnell and Ryan to support a “clean” debt-ceiling bill—one untethered by any other controversial issues—to increase its likelihood of winning over Democrats, reports Politico.

Ryan and McConnell quietly began preparing to pass a clean bill. Meanwhile, Democrats geared up to try to trade their votes for concessions on immigration or another issue, such as a reauthorization of health-insurance programs for low-income children.

A matter of time

Then Hurricane Harvey roared in and toppled these careful calculations. Congress was united in its desire to send emergency aid to Texas for the recovery, but members disagreed on how to do so. Some House Republicans supported linking hurricane relief to the debt-ceiling vote, and Mnuchin told Fox News Sunday that he and the president did as well. If the debt ceiling were tied to hurricane relief, Democrats would risk looking petty if they tried to add controversial concessions on immigration.

Ryan, McConnell, and the White House forged ahead with a bill linking hurricane relief with a debt-ceiling vote. With Hurricane Irma looming in the wake of Harvey’s devastation, the House voted overwhelmingly—419 to 3—on September 6 to authorize almost $8 billion in emergency aid.

The debt-ceiling side of the bill still needed to be negotiated. Schumer and Pelosi knew the time wasn’t right to press for concessions on a hot-button issue such as immigration, but they realized they could try to move that negotiation down the road by pushing for only a three-month suspension of the debt ceiling. That would set them up for another debt-limit battle at the end of the year. At that point, Trump and Republicans would again need Democratic votes on the issue—and might be willing to make significant concessions on issues such as immigration and health care.

When he got wind of the proposal, Ryan called it “ridiculous and disgraceful,” and accused the Democratic leaders of playing politics.

The same day the Harvey measure sailed through the House, Ryan, McConnell, Pelosi, and Schumer met with Trump and Mnuchin in the Oval Office to hammer out an agreement on the debt ceiling.

McConnell and Ryan proposed an 18-month debt-ceiling suspension, which would postpone the next controversial vote on government debt until after the 2018 midterm elections. Mnuchin agreed; the Democrats balked. The Republicans said they could live with a six-month suspension. Pelosi and Schumer stood firm at three months.

Then, in defiance of his party and his own Treasury Secretary, Trump shocked everyone present by siding with the Democrats. For Trump, who had been publicly disparaging McConnell over Congress’s inability to advance his agenda, an alliance with Democrats marked a sharp and unexpected swerve toward bipartisanship.

“Everybody was happy,” Trump told reporters after the meeting. “Not too happy, because you can never be toohappy, but they were happy enough.”

In fact, although they voted the bill through, Republicans weren’t happy with it at all. There had been no need for Trump to concede to “Chuck and Nancy,” as the president called them after the meeting, because they likely were bluffing, Republicans believed: congressional Democrats never would have voted against hurricane relief and a debt-ceiling suspension, no matter how short or long.

“It was a really good moment of some bipartisanship,” said Schumer. But given the president’s mercurial nature, no one was willing to predict whether it was the dawn of a more collaborative era in Washington or simply a one-off deal. “We’ll see,” Schumer said.

3 questions for those in a one-down position:

1. “What’s my leverage?” Tradeoffs across issues can offer a rich source of value in negotiation but sometimes can be hard to implement. When you’re the weaker party, you might gain the leverage you need to make tradeoffs by exploiting disharmony among the parties across the table.

2. “Can I use time to my advantage?” If you can’t get what you want in the present, you may be able to set yourself up to reach your goals at a future date.

3. “How can I win over an unlikely ally?” Don’t write off potential counterparts just because they’ve allied themselves with your rivals. Show them what you can do for them, and they may be willing to switch teams.

Obama walks the line between criticism and provocation 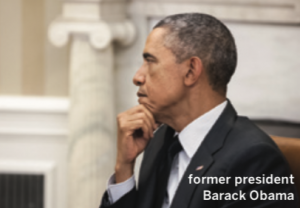 When Donald Trump visited the White House soon after being elected president last November, then-president Barack Obama urged him to keep in place the Deferred Action on Childhood Arrivals (DACA) program that Obama instituted through executive fiat in 2012. The program shields from deportation about 800,000 young people who were brought to the United States illegally and grants them work permits. Obama warned Trump that he would publicly berate him if he revoked DACA, according to Politico.

But after Attorney General Jeff Sessions announced Trump’s decision to rescind DACA on September 6, 2017, Obama stayed off cable news shows and away from rallies. Instead, he expressed his displeasure in a lengthy but tempered Facebook post that did not refer to the president by name. Similarly, in statements on Obamacare repeal and Trump’s decision to exit the Paris climate accord, the former president has avoided referring to Trump directly, and his criticisms have been muted in tone.

Some on the left have expressed disappointment that Obama hasn’t spoken out more forcefully as Trump has tried to erase his legacy. But Obama’s measured approach reportedly has been carefully calculated to avoid provoking a backlash from his impulsive and often volatile successor.

Obama is well aware that he is often a lightning rod for conservative opinion. Picking public battles with Trump could trigger the president’s Twitter finger—and give Republicans a convenient scapegoat as they pursue their agenda.

“We don’t want to give this administration an excuse to do the wrong thing,” one Obama adviser told Politico, adding, “It’s in Trump’s interest for Barack Obama to be the foil, but it’s in nobody else’s.”

Whether Obama’s strategy of avoiding direct confrontation with Trump will pay off remains to be seen. For now, it serves as a reminder of the value of carefully assessing a counterpart’s temperament to ensure that persuasion efforts don’t backfire.