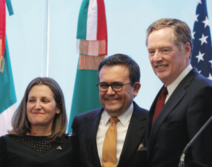 During the 2016 presidential campaign, Donald Trump blamed the trilateral North American Free Trade Agreement (NAFTA) among Canada, Mexico, and the United States for the U.S. trade deficit with Mexico and for lost American manufacturing jobs. Upon taking office, Trump said he was determined to either engage in renegotiation of NAFTA or walk away from the pact. Mexican president Enrique Peña Nieto and Canadian prime minister Justin Trudeau persuaded Trump to give renegotiation a chance, according to the Wall Street Journal.

But when the renegotiation got underway in August 2017, it became clear that the three sides were miles apart on a host of issues, from Canadian dairy policy to wages for Mexican autoworkers to whether the pact should eventually expire. The renegotiation was repeatedly delayed by threats, stalemates, and unclear motives. But on September 30, 2018, the parties agreed to a deal that was less an overhaul of NAFTA than a modest adjustment. The new trade pact, dubbed the United States–Mexico–Canada Agreement (USMCA; aka the new NAFTA or NAFTA 2.0) was ratified by all three countries and went into effect on July 1, 2020.

The difficult, drawn-out process offered the following four lessons for the renegotiation of contracts.

The NAFTA renegotiation was marked by deadlines that the parties disregarded time and again. At first, the leaders said they needed to finish by the end of 2017, before the July 1, 2018, Mexican election ushered in a new president who might have a new set of demands.

After missing that deadline, the parties reset it for the end of the first quarter of 2018 with the same justification. That date passed without agreement. Next, U.S. House of Representatives speaker Paul Ryan set a May 17, 2018, deadline for a new NAFTA deal to be voted on by the current Congress. That deadline also came and went.

With Peña Nieto due to leave office on December 1, 2018, NAFTA negotiators were determined to reach a deal by September 30 to allow time for a mandatory 60-day review period. They managed to do so just an hour before midnight on September 30.

Anyone who’s worked on a long, complex project knows that it’s hard to take artificial timetables seriously, especially when parties have incentives to drag things out. The governments of Canada and Mexico, for instance, might have wanted to push NAFTA talks down the road in the hope that the Trump administration would accept the status quo.

Some also speculated that the White House threw roadblocks at the talks because of the concern that Congress, pro-business leaders, and voters would be angered by whatever outcome was reached. “A long negotiation in which [Trump] can continue to claim he is fighting for a better deal is by far the best bet,” argued Edward Alden in Politico. “I’m in no rush,” Trump said at an August 16, 2018, cabinet meeting about a possible NAFTA deal, according to the Journal.

Only when the parties faced a real deadline—Peña Nieto’s departure—did they get serious about wrapping up talks.

The Trump administration made several extreme demands during the renegotiation while offering few concessions on issues important to the other parties. For example, Trump proposed a “sunset clause” in which NAFTA would expire in five years unless explicitly renewed. This was a nonstarter for Canada and Mexico, which argued that businesses would balk at investing in the changes Trump wanted if the deal might be abandoned after five years.

For negotiators who are trying to reach a mutually beneficial agreement, threats should be used only as a last resort.

“Normally in a negotiation, each side has to have flexibility,” Carla Hills, the lead negotiator for the original NAFTA deal under George H.W. Bush told the Journal. “If the U.S. side has no flexibility on important issues, it’s certainly not going to move forward.”

Ultimately, the White House ended up backing down from its demand for a sunset clause in order to forge an agreement with Mexico. Mexico, for its part, agreed to meet autoworker wage demands from the United States. It took a year, but the two parties finally agreed to a tradeoff.

In a renegotiation, you can engage in hard bargaining and hope that the other side caves in. But in addition to claiming value in negotiation, you should also strive to create value by conceding on issues that matter less to you in exchange for what you want most.

3. Use Threats Only as a Last Resort

NAFTA talks came to a standstill in June 2018, when Trump unveiled several protectionist U.S. trade measures, including new tariffs on Canadian steel and aluminum imports and a ban on some imported cars.

In response, Canada and Mexico both threatened tariffs on U.S. goods. “Canadians, we’re polite, we’re reasonable, but we will not be pushed around,” Trudeau said at a news conference.

Trump responded in a tweet by calling Trudeau “meek and mild.” The next round of NAFTA meetings was put on hold.

If Trump’s goal was to disrupt the NAFTA talks, his threat succeeded in doing so. But for negotiators who are trying to reach a mutually beneficial agreement, threats should be used only as a last resort. Threats often beget counterthreats. They also break down trust and damage relationships.

Here again, creative tradeoffs can bridge differences in renegotiation and initial deal making. If all else fails, be sure you’re prepared to follow through on any threats you make. Consider Trump’s repeated threat to pull the United States out of NAFTA. Whether he actually had the authority to do so was unclear. The threat brought Canada and Mexico to the negotiating table, but their refusal to accede to at least some tough U.S. demands suggests they were prepared to call Trump’s bluff.

4. Weaker Parties Should Stick Together.

In early June, 2018, Larry Kudlow, the director of Trump’s National Economic Council, told Fox News that Trump was “very seriously contemplating . . . a shift in NAFTA negotiations” from a multiparty negotiation to separate bilateral negotiations with Canada and Mexico. Then, in mid-July, with negotiations between Canada and the United States still on hold, Trump suggested that the United States was narrowing in on a new bilateral trade deal with Mexico and that talks with Canada could come later.

Canadian and Mexican officials responded by reaffirming their commitment to trilateral negotiations. Andrew Leslie, a Canadian trade official, said NAFTA had been a “win-win-win” for all three nations.

Canada and Mexico had clear incentives to stick with trilateral negotiations. In multiparty negotiations, weaker parties can enhance their strength by forming alliances. As the largest economy in the world, the United States is by far the strongest of the three NAFTA partners. Left to negotiate on their own, Canada and Mexico would have been in much weaker bargaining positions.

For stronger parties, a “divide and conquer” strategy can offer value-claiming advantages. However, the more parties there are in a renegotiation, the more opportunities for smart tradeoffs and value creation there are likely to be. The benefits of taking the biggest slice need to be weighed against the potential gains of adding more parties and issues to the mix.

A North American free trade zone, first proposed by Ronald Reagan during the 1979 presidential campaign, was negotiated during the George H.W. Bush administration and ratified in 1994, during Bill Clinton’s first term in office. Designed to boost North American trade by eliminating trade and investment barriers, NAFTA gradually eliminated tariffs between Mexico and the United States, following a path previously taken by Canada and the United States.

Most economists believe NAFTA has had an overall positive effect on North American economies. Trade within North America rose from about $290 billion in 1993 to more than $1 trillion in 2016, according to the Council on Foreign Relations. However, labor unions and others have blamed NAFTA for the U.S. trade deficit with Mexico and the loss of U.S. manufacturing jobs to Mexico.

Because trade with Canada and Mexico comprises only a small percentage of the U.S. gross domestic product, NAFTA has had only a modest impact on the U.S. economy, according to a Congressional Research Service review.

What challenges have you faced in renegotiation, and how have you overcome them?