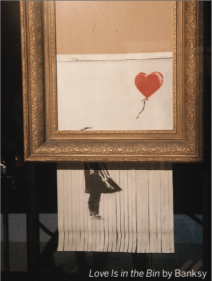 They say negotiation is an art, and that certainly was the case on October 5, 2018, when the mysterious artist known as Banksy turned a Sotheby’s auction into a clever—and very expensive—piece of performance art.

An anonymous and highly celebrated street artist, British-based Banksy is known for his subversive graffiti and cheeky pranks, such as the time he snuck one of his canvases onto a wall in New York’s Metropolitan Museum of Art for two hours. The artist’s work is rarely sold, mainly because most of it is painted on buildings, but this past fall, he allowed a spray-painted canvas from 2000 called Girl With Balloon to be sold at the venerable Sotheby’s auction house in London.

A video Banksy later released of the fateful night shows frenzied bidding in the auction room, mainly by representatives of bidders who phoned in to keep their identities concealed—a detail the undercover artist might have appreciated. When the dust settled, one of those unidentified bidders had won the painting for $1.4 million. Applause erupted, an alarm went off—and those present gasped in shock as Banksy’s painting descended through the bottom of the frame and emerged shredded into ribbons. Midway through its destruction, the painting halted, half of it in the frame, the other half hanging beneath it like fringe.

“We’ve been Banksy-ed,” Alex Branczik, Sotheby’s head of contemporary art in Europe, said in a press conference afterward. The auction house insisted it was just as bewildered by the prank as anyone. But some believed Sotheby’s was involved in it, noting the painting’s unusually thick and heavy frame, the New York Times reports.

The video Banksy released the following day showed an unknown man in the auction room operating a hidden electronic device that appeared to have activated a shredder concealed in the painting’s frame. “A few years ago I secretly built a shredder into a painting in case it was ever put up for auction,” Banksy wrote in a caption. He closed the video with a quote attributed to Pablo Picasso: “The urge to destroy is also a creative urge.”

In a video clip released later on YouTube, Banksy revealed he had intended for the painting to be completely destroyed but that the shredder had jammed. “In rehearsals it worked every time,” a caption said. Banksy also denied that Sotheby’s was aware of the prank.

In an interview with the Art Newspaper, Branczik also denied any sort of collusion, saying that Sotheby’s had asked the company representing Banksy if the gaudy frame could be removed from the painting before the auction and was told the frame was “integral to the artwork.” A third-party conservator working for Sotheby’s had inspected the frame, Branczik said, but did not take it apart. Neither the representative nor the auction house would say whether Banksy had been the seller of the painting, though some evidence suggests the artist gifted it to his publicist, Jo Brooks, in 2006.

At first blush, it might seem as if the winning bidder for Girl With Balloon was suckered. After all, wasn’t activist Banksy poking fun at the commodification of art and the high prices paid at auctions? But it quickly became clear that the stunt had only enhanced the painting’s value, with one prominent critic calling it a “masterpiece of radical performance,” according to the Times.

In a statement released by Sotheby’s, the anonymous European collector who placed the winning bid on the painting said she was initially “shocked” by the shredding of the painting, but “gradually I began to realize that I would end up with my own piece of art history.” Apparently given the option to nullify the sale, she chose to move forward with it, the Art Newspaper reports.

In response to Sotheby’s request for a new authentication of the piece, a representative for Banksy revealed that Girl With Balloon had been designated an entirely new piece of art postshredding and renamed Love Is in the Bin.

Portrait of an auction

The peculiar tale of an auction gone delightfully awry might appear to have little to do with other dealmaking scenarios, but a few broad strokes can be divined from the stunt: