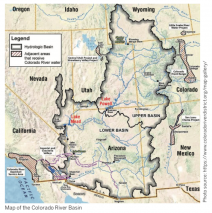 For decades, the Colorado River has been in trouble. The river supplies water to 40 million people and five million acres of farmland in seven U.S. states and Mexico. But following 19 years of drought and population growth, the water levels of the river’s largest reservoirs, Lake Mead and Lake Powell, have sunk to record lows. If Lake Mead continues to be depleted, it risks reaching a “dead pool” stage where the water will be trapped below the gates that let it out.

Back in 2007, reacting to the early years of drought, the seven states served by the river— Arizona, California, Colorado, Nevada, New Mexico, Utah, and Wyoming—negotiated a 20-year plan in which they voluntarily agreed to use less water to preserve lakes Powell and Mead. But their agreement, the Drought Contingency Plan, has failed to keep up with population growth and what some scientists who study the river now refer to not as drought but aridification—long-term drying hastened by climate change and overuse.

Several years ago, the seven states returned to the negotiating table, aiming to agree to more stringent cuts to water use to boost the reservoirs’ long-term supply. They had a strong incentive to reach agreement: If they failed to negotiate a joint plan by the end of 2018, the federal Bureau of Reclamation threatened to take over management of the river’s water.

The Colorado River crisis reveals a fundamental human flaw: We focus so much on meeting our immediate desires that we overlook future needs. Undersaving for retirement, squandering natural resources, and failing to prepare for climate change are all unfortunate consequences of our chronic tendency to privilege present concerns over future ones.

Factoring long-term concerns into our decisions and negotiations becomes all the more difficult when we’re competing with other parties for scarce resources. When fishing fleets in a given area compete to catch as many fish as possible, for example, depletion of the seas is the inevitable result. Ecologist Garrett Hardin called this type of social dilemma “the tragedy of the commons.” Each group has short-term incentives to grab as much of the scarce resource as it can. When all groups behave in this self-interested manner, everyone suffers in the long term.

Our decisions are also impaired by our self-serving judgments of what would constitute a “fair” agreement—thatis, we make egocentric justifications for why we deserve more than others. Water managers of the Colorado River in different states, for instance, have clashed on who should make the greatest sacrifices, and cities and farmers have accused each other of using too much water. Overoptimism—the assumption that things will work out, somehow or other—also keeps us from making responsible decisions. “Historically, we’ve always said, ‘Well, next year will be better,’” Eric Kuhn, former general manager of the Colorado River District water agency, told NPR. “And that’s the easy way out.”

But these all-too-human barriers to sustainable decision making are not insurmountable. The seven states charged with renegotiating their Drought Contingency Plan recently reached an agreement that, while just a start, could set the groundwork needed for effective long-term solutions.

As the multistate negotiations began, the goal for the states in the Colorado River’s Upper Basin—Colorado, New Mexico, Utah, and Wyoming—was to keep Lake Powell above a target level to allow water to continue to be sent to Lake Mead. The Lower Basin states of Arizona, California, and Nevada were tasked with agreeing on new water-usage cuts and creating new incentives for water conservation for Lake Mead.

By late 2018, water authorities in Mexico and five of the states had reached agreements. Arizona and California needed more time.

California hit a roadblock when the board of its Imperial Irrigation District (IID), the largest user of Colorado River water, said in early 2018 that it wouldn’t sign on to a statewide deal unless it received $200 million in federal funds to manage the declining Salton Sea, which is part of the broader Colorado River system outside Palm Springs. Created accidentally in 1905 when the Colorado River breached its levees and flowed into a dry lake bed, the sea has grown increasingly saline and polluted, posing threats to public health. Without the IID’s support, it looked like California might not be able to sign on to the deal. But then a novel solution arose: Another California water agency agreed to take on the burden of further cuts, allowing the state to sign on. The IID later reached a separate deal with the State of California to mitigate the Salton Sea’s environmental and health hazards.

Arizona was hampered by the fact that it faced the steepest cuts to water use and was also the only state that needed to win the support of its legislature. Agricultural interests in the state balked at agreeing to significant cuts but ultimately agreed to do so in exchange for funding to help them switch from river water to groundwater.

Nevada, by comparison, was prepared to easily absorb new cuts to water use thanks to a pumping system it had constructed, with some foresight, to access the Colorado River at low elevations. As a result, Nevada approached the negotiations with relative neutrality and ended up playing the role of “Switzerland” in a dispute between Upper and Lower Basin states, according to Southern Nevada Water Authority general manager John Entsminger. Under the 1922 Colorado River Compact, Upper Basin states were entitled to use more water than Lower Basin states but were obligated to send conserved water to Lake Mead to address its chronic depletion, according to the Denver Post. That created tensions between the two regions. Nevada helped bridge the divide by negotiating for Upper Basin states to be able to bank their conserved water in Lake Powell without sending it to Lake Mead, the Independent reports.

Going with the flow

In the end, the states were able to celebrate an agreement—and breathe a sigh of relief. “Instead of balkanizing into fractured state interest groups, we’re all working together to control our own destiny,” James Eklund, the attorney who represented Colorado in the negotiations, told the Denver Post.

Yet all parties involved are aware that the revised Drought Contingency Plan is only a short-term fix. Next year, water managers will launch negotiations to come up with a long-term plan for the Colorado River beyond 2026. As the river faces even more pressure from changing weather conditions and population growth, negotiations will become more challenging.

Their recent breakthrough has left some water managers feeling hopeful that they can sustain their cooperative spirit. “Over the last five to 10 years, what I’ve noticed as a positive is [that] those tribalistic instincts seem to be going away,” Shane Leonard, general manager of the Roosevelt Water Conservation District in central Arizona, told Cronkite News. “They’re definitely still there. But they’re not as hard as they used to be.”

“We haven’t seen the catastrophe that people thought would happen,” University of New Mexico Water Resources Program director John Fleck told the Independent. “We’ve seen voluntary measures, communities learning how to use less water, in a way that shows we can do this.”

Bring future concerns to the table

It takes extraordinary coordination, discipline, and foresight—as well as some fear of what the future could bring—to negotiate agreements that mandate sustainable behavior. The following three guidelines can help:

1. Fill the well for others. While working as a facilitator to bridge differences between warring factions in the Democratic Republic of Congo a few years ago, Brandeis University professor Alain Lempereur found that parties were losing track of the big picture. He asked them to think about the kind of legacy they would like to leave for their children, a reframing that led to a breakthrough. The closer we feel to future generations, the more motivated we will be to act on their behalf by making responsible long-term decisions. In doing so, we narrow the “psychological distance between generations,” according to Duke University professor Kimberly Wade-Benzoni.

2. Go where the river takes you. We often view differences between negotiators in multiparty dealmaking as barriers. In fact, our differences are often potential sources of value. If one party is in a position to give very little, another party may be willing to pick up the slack in order to get a deal done. More powerful parties may also find they’re in a privileged position that enables them to broker deals between other parties, as the State of Nevada did. In social dilemmas, such as fights over scarce resources, a neutral party may be needed to help parties look beyond their self-serving, tribal viewpoints to see the big picture.

3. View the glass as half-full. While we sometimes must make significant concessions to ensure a sustainable future, changing environmental and economic circumstances also offer a wealth of opportunities for value creation. Water users and managers need to continue to explore ways to allow all parties to meet their most important needs through cooperative, economic, and technological measures, write Shafiqul Islam and Lawrence Susskind in their book Water Diplomacy: A Negotiated Approach to Managing Complex Water Networks (Routledge, 2012). In any complex negotiation over scarce resources, the most powerful—and helpful—parties are often those who have taken steps to meet future needs.