On September 5, 2017, President Donald Trump announced that in six months he would phase out Deferred Action for Childhood Arrivals (DACA), the Obama-era policy that has shielded from deportation about 800,000 people brought to the United States illegally as children. Members of Congress seeking permanent protections for the so-called Dreamers covered under DACA then faced a March 5, 2018, deadline to get an immigration bill passed. To do so, lawmakers needed to forge a bipartisan agreement.

Talks took off in early 2018, after Trump gave his stamp of approval to bipartisan negotiations. On January 9, the president convened a meeting at the White House with 25 Democratic and Republican members of Congress who had been active on immigration and then–Secretary of Homeland Security Kirstjen Nielsen.

Typically, presidents allow the news media to observe the first few minutes of such meetings “to record the traditional platitudes before being kicked out,” writes Peter Baker in the New York Times. This time, however, Trump allowed the media to stay and record the first hour of the negotiating session.

The meeting, broadcast on television and online, gave the public a rare glimpse of Washington dealmaking in action. It also allowed Trump to appear presidential and gave Dreamers and their supporters hope that an immigration deal was close at hand. But just two days later, in a private meeting, Trump pivoted from cooperation to conflict—and the deal collapsed. There’s much negotiators can learn from such failed negotiation examples. 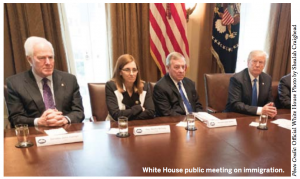 At the White House on January 9, Trump invited lawmakers to discuss which immigration-related issues to include in their deal. Hot-button issues—including a path to citizenship for the roughly 11 million undocumented immigrants in the United States, border security, and rules on foreign workers—had stymied past attempts at immigration reform and would be difficult to negotiate quickly.

Most lawmakers argued the bill should cover just three issues: (1) protections for Dreamers; (2) beefed-up border security, including Trump’s campaign promise of a border wall between the United States and Mexico; and (3) efforts to reduce immigration based on family ties, sometimes known as chain migration. The scope was narrow, but the inclusion of issues on which they disagreed could give Democrats and Republicans opportunities for integrative negotiations by making tradeoffs.

Republican senator Lindsey Graham, who supported a path to citizenship for the undocumented, said he agreed with the “smart but hard” decision to postpone more comprehensive immigration reform.

“You talk about comprehensive reform,” Trump said. “If we do the right bill here, we are not very far away [from that]. . . . And if you want to take that further step, I don’t care. I’ll take the heat.”

Trump’s expressed openness to broader reform was surprising, given his anti-immigrant rhetoric during the presidential campaign. He also hedged on his past demands for a wall spanning the entire U.S.-Mexico border, noting that parts of the border have natural barriers.

Trump told the lawmakers that he trusted them to reach a good bipartisan agreement. “When this group comes back, hopefully with an agreement,” he said, “I’m signing it. I’m not going to be saying, ‘Oh, gee, I want this or I want that.’ I’ll be signing it. Because I have a lot of confidence in the people in this room.”

Shooting for the Moon

Democratic senator Diane Feinstein then made a bold proposal to Trump: “What about a clean DACA bill now, with a commitment that we go into a comprehensive immigration reform procedure?” She was asking for a bill on a single, Democratic-favored issue—protections for Dreamers—with no other issues on which Republicans could negotiate concessions, such as border security.

“I have no problem [with that],” Trump responded. “We’re going to do DACA, and then we can start immediately on the Phase 2, which would be comprehensive [reform].”

“Would you be agreeable to that?” Feinstein said.

“Yeah, I would like to do that,” Trump said.

No doubt alarmed, Republican senator and Trump ally Kevin McCarthy interjected: “Mr. President, you need to be clear, though . . . you have to have security. . . .”

“I think she’s saying something different,” said McCarthy. “I’m thinking you’re saying DACA without security,” he said to Feinstein. “Are you talking about security as well?”

“Do you really think there can be agreement on those three difficult subjects . . . in time to get DACA passed and effective?” Feinstein asked McCarthy.

“Yes,” said McCarthy. “Us getting to the room? I haven’t seen us be this close at having this discussion in quite a few years. . . . I believe we can get there.”

Feinstein didn’t press the issue further. During the meeting, Trump also added a fourth issue to the discussion, repeatedly arguing that the random “Green Card lottery” for legal immigration to the United States should be replaced with a merit-based system that prioritized in-demand workers.

When Trump finally dismissed the media after an hour, he had met his goal of appearing presidential, rational, and focused. “He was in command of the meeting while inviting input,” wrote Baker in the Times. “He did not berate anyone. He did not call anyone derogatory nicknames. He signaled that he was open to compromise.”

Trump reportedly continued in that collaborative vein after the doors closed. The collegial tone left many of the lawmakers feeling upbeat. “There’s a path forward,” Republican senator John Thune told reporters. “Everybody wants, eventually, to get to yes.”

The Senate’s so-called Gang of 6, a bipartisan working group that included Graham and Senate Democrat Richard Durbin, splintered off to negotiate a bipartisan agreement they could bring to the president. Two days later, on January 11, they had reached a bipartisan “agreement in principle” according to Republican senator and group member Jeff Flake. Under the proposal, Dreamers would be given a 12-year path to citizenship, but in a concession to Republicans, their parents would not be eligible to become citizens. The deal would allocate $2.7 billion for border security, including Trump’s requested $1.6 billion for a border wall. And in line with Trump’s request, the Democrats agreed to replace the current annual random lottery for 50,000 U.S. visas with merit-based visas given to immigrants from underrepresented countries.

Durbin called Trump that morning to brief him on the deal, the Washington Post reports. Trump reportedly praised Durbin’s efforts and invited him and Graham to visit him at noon. “It’s all peachy,” Flake told reporters, according to Vox. 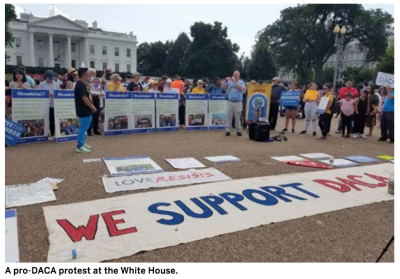 When Durbin and Graham arrived at the Oval Office, they were surprised to find immigration hard-liners from the Senate—Republicans McCarthy, Tom Cotton, David Perdue, and Bob Goodlatte—also in attendance. The White House summoned the conservatives at the last minute, according to the Post, because Stephen Miller, Trump’s chief immigration adviser, and White House Chief of Staff John Kelly objected to the bipartisan agreement.

Trump’s mood had darkened since his phone call with Durbin. He rejected Durbin and Graham’s deal, saying it didn’t include enough money for a border wall. And in a discussion of merit-based immigration, the president insulted African countries using vulgar language and suggested that immigrants from countries such as Norway should be admitted instead, according to the Post.

Overall, the meeting was “short, tense, and often dominated by loud cross-talk and swearing,” Democrats and Republicans told the Post—the complete opposite of the Tuesday meeting. Graham and Durbin left feeling shaken. “Tuesday we had a president that I was proud to golf with, call my friend, who understood immigration had to be bipartisan,” Graham lamented during a Senate hearing. “I don’t know where that guy went, but I want him back.”

Trump’s rejection of the bipartisan agreement and his insults of African nations left negotiations to protect the Dreamers in tatters. The Gang of 6 continued to negotiate and lobby for its bipartisan agreement in the Senate, but it and other immigration proposals failed to gain traction.

Three district courts issued orders that prevented a phaseout of DACA by the March 2018 deadline, and the U.S. Supreme Court ruled against the recision of DACA in June 2020. After being sworn in as president on January 20, 2021, Joe Biden issued an executive order reinstating DACA.

5 Lessons from the Collapse of a Bipartisan Agreement

The failed 2017 bipartisan agreement on immigration nonetheless offers negotiation skills and strategies to learn from:

What other types of barriers to bipartisan agreement have you observed in government negotiations?