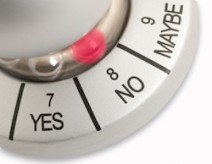 Go with your gut in dealmaking decisions?

Why it’s tempting to trust your gut in dealmaking negotiations

He describes people who can assess the integrity of a work of art within seconds, predict the likelihood that a couple will get divorced based on a short conversation, and assess their romantic interest in another on a “speed date.”

Documenting numerous stories in which split-second decisions, or “blinks,” led to successful outcomes, Gladwell concludes that rapid cognitions can be as effective as more deliberate and thoughtfully made decisions.

Blink will make negotiators feel even more comfortable relying on their first impressions. Unfortunately, this trust in intuition is unwarranted. Max H. Bazerman advises negotiators to remain skeptical of their ability to make wise decisions on the spot.

Gladwell writes in his first chapter, “The first task of Blink is to convince you of a simple fact: decisions made very quickly can be every bit as good as decisions made cautiously and deliberately.”

Many readers will be delighted that this talented writer, known for his understanding of the social sciences, has endorsed their confidence in their instinct.

Particularly fascinating is the tale Gary Klein, author of Sources of Power, related to Gladwell of a fire department commander in Cleveland who, while still lieutenant, responded with his crew to a routine call. The fire crew broke down the door of the house and started fighting back the flames in the kitchen.

Suddenly, sensing that something was wrong, the lieutenant ordered the crew out of the house.

Moments after they were all safely out, the floor collapsed.

As it turned out, the fire was directly beneath the crew, in the basement, rather than the kitchen. The lieutenant could not articulate his rationale for his order, yet he made it nonetheless.

Gladwell credits the lieutenant’s “blink” of intuition with saving lives.

If the lieutenant had carefully considered his options, Gladwell notes, it would have been too late; he and the crew would have died.

Why Blinking May Do More Harm Than Good

If people actually did undervalue their rapid cognitions, Gladwell’s support of intuition would be worthwhile. But my experience teaching tens of thousands of MBA executive students has convinced me that many intelligent people do believe they can trust their instincts.

They already take their gut instincts seriously and act on them on a daily basis.

These smart, accomplished people are usually skeptical when I first offer scientific evidence that their intuition often fails them.

Blink gives them even more confidence in their rapid cognitions.

Yet the past 30 years of behavioral-decision research and its application to negotiation have given us abundant reasons to question our instinctual responses. At the same time that Gladwell capitalized on our self-serving biases to write a successful book, he ignored the detrimental impact of many other significant cognitive biases: overconfidence, the tendency to escalate commitment to a chosen course of action, the undue influence of vivid information, and others documented here.

Psychological research shows that these harmful biases are likely to affect our rapid cognitions more than they do our deliberative thought. After all, it’s our rapid cognitions that motivate us to fly off the handle, overeat, drink too much, and gamble away extra earnings.

Adapted from “In Negotiation, Think Before You Blink,” by Max Bazerman for the October 2006 issue of the Negotiation newsletter.