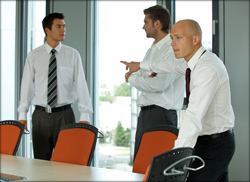 How satisfied are you with the outcomes that negotiators in your organization achieve? Most likely, you can think of a few successes worth crowing about, a few you’d like to sweep under the carpet, and many more that turned out just so-so. Maybe your department never manages to sign the most promising job candidates. Or perhaps your sales force consistently brings back average deals, no matter how much negotiation training you give them.

It’s tempting to blame the people involved for such problems, but when you do so, you overlook the organizational structures and decisions that contribute to poor negotiated outcomes. In particular, many organizations fail to set clear, effective accountability standards for their negotiators.

Recent research and theory on accountability by Harvard Kennedy School professor Jennifer Lerner, University of California at Berkeley professor Philip Tetlock, and others, offers advice to help negotiators reach far beyond mediocrity. In today’s marketplace, where everyone is trying to do more with less, organizational leaders need to set up strong accountability measures based on clear guidelines and the right types of incentives and consequences. When negotiators know they will have to provide a rationale for their actions, their negotiation behavior often changes significantly, researchers have found. By contrast, negotiators who lack accountability may feel confused about which direction to take or apathetic about the task at hand.

Knowing in advance that we’ll be accountable for our decisions appears to motivate us to do our best. Tetlock also found that making decision makers accountable in advance (rather than after the fact) helped them avoid overconfidence, a common and costly negotiator error. Therefore, be sure to tell employees during the planning stages of a negotiation that they’ll be expected to justify their decisions.