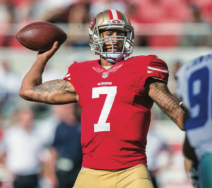 Looking back, it’s almost hard to imagine, but when then–San Francisco 49ers quarterback Colin Kaepernick began sitting down for pregame performances of “The Star-Spangled Banner,” no one noticed. He’d sat through two national anthems during the 2016 preseason before reporters asked him about it. Citing racial oppression and police brutality, Kaepernick explained that he planned to sit through the anthem “until the [American] flag represents what it’s supposed to represent.”

Kaepernick soon modified his protest, getting down on one knee for the anthem, and was joined by his teammate Eric Reid. Soon other African American players across the National Football League (NFL) also began “taking a knee,” linking arms, or raising fists while the anthem played. Attracting both praise and condemnation, the protests ignited a fiery nationwide debate. Some viewed the players’ actions as unpatriotic and disrespectful, while others believed they drew much-needed attention to racial injustice and police shootings of unarmed Black men.

When controversy flares in the business world, it can be difficult for managers and other decision makers to know how to respond. Fearing the potential repercussions of appearing to take a side, leaders may try to ignore the controversy, hoping it will blow over.

The story of how the NFL mismanaged the controversy over player protests during the playing of the national anthem highlights what can happen when we overlook the power of negotiation to bridge differences and resolve conflict.

After the 2016 season, Kaepernick, expecting to be cut by the 49ers, became a free agent. Despite his proven success on the field, no team signed him. Kaepernick sued the NFL, accusing its team owners of colluding to keep him out of the league because of his protests.

NFL executives and owners believed the protests during the national anthem had unfairly politicized their sport and put them in a tough spot. Football fans on both sides of the debate had begun boycotting the league, and already declining ratings fell further.

Under political and financial pressure to resolve the controversy, NFL commissioner Roger Goodell met
with team owners on May 23, 2018, to propose a “compromise”: Players could remain in the locker room during the “The Star-Spangled Banner,” but if they took a knee or otherwise protested on the field, they would face penalties, as would their teams. Player penalties would be determined by each team. All but two owners voted in favor of the new policy.

The NFL Players Association (NFLPA) filed a grievance, arguing that the policy violated the NFL’s collective bargaining agreement (CBA) and infringed on players’ freedom of expression. With the NFLPA threatening to delay negotiations on a new CBA, the NFL agreed to meet with the union to negotiate a revised policy. However, clubs wishing to implement a national anthem policy for the 2018–2019 season were still required to submit it to the league before the start of training camp.

In July, the Associated Press obtained the Miami Dolphins’ proposed anthem policy, which gave the team the right to suspend a player for up to four games for protesting on the field. The penalty was widely condemned for being overly harsh, putting anthem protests on par with drug use, gambling, and domestic violence violations. Before more team policies could be leaked to the media, the NFL announced it would not enforce its anthem policy for several weeks pending negotiations with the NFLPA.

Some viewed the players’ actions as unpatriotic and disrespectful, while others believed they drew much-needed attention to racial injustice and police shootings of unarmed Black men.

Soon after, Dallas Cowboys owner Jerry Jones said he would not allow his team’s players to remain in the locker room during the anthem and would require them to stand while it was played. “Way to go, Jerry!” Trump tweeted in response. “This is what the league should do!” Los Angeles Chargers offensive lineman Russell Okung, a member of the NFLPA executive committee, questioned whether the league intended to negotiate with the union in good faith, given that owners such as Jones felt free to negotiate a stricter anthem policy than the one set by the NFL, according to the New York Times.

In August 2018, an arbitrator sent Kaepernick’s claim to trial, suggesting there was enough evidence of collusion to keep his case against the NFL alive, according to ESPN.com. NFL owners, coaches, and executives were expected to be called to testify.

As the 2018–2019 football season kicked off in September, ESPN reported that the league had changed course and decided not to implement a new policy on the anthem for the remainder of the season. Further, players and teams would not be disciplined for taking a knee or otherwise demonstrating during “The Star-Spangled Banner.”

The decision to put the policy on hold was viewed as a victory for the players’ union—but it also let the team owners off the hook. “They were rescued from a trap they set up themselves,” writes Adam Stites on the blog SB Nation. Teams wouldn’t have to pay penalties for anthem violations, hand down unpopular rules, or penalize players. At the same time, players likely were aware that they risked being iced out of the league for protesting. As for Goodell, he was widely criticized for bungling the policy change and keeping the controversy in the news.

Takeaways from a flawed playbook

There’s no doubt about it: The polarizing protests that Kaepernick launched put the NFL in a very difficult position. The league’s failed attempts to deal with the controversy suggest the following conclusions for others coping with an unanticipated controversy:

The ups and downs of an endorsement deal 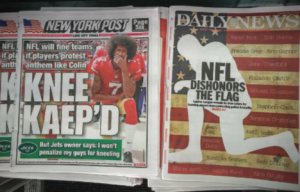 After Colin Kaepernick was sidelined from pro football in 2017, Nike faced a dilemma. The quarterback had had an endorsement deal with the sporting goods manufacturer since 2011, and there were two more years left on his contract, the New York Times reports. But, lacking a team, Kaepernick’s name couldn’t be printed on fan jerseys. Moreover, Nike, which pays the NFL $220 million annually to put its swoosh logo on all NFL jerseys and licensed clothing, was concerned about antagonizing the league by using Kaepernick in ads.

In the summer of 2017, executives in Nike’s sports marketing group reportedly decided to release Kaepernick early from his contract. But when Nigel Powell, the company’s head of communications, heard of the decision, he “went ballistic,” a former employee told the Times. Nike, Powell argued, would face a backlash from the media and young urban consumers, its prized demographic, for appearing to side with the NFL over Kaepernick. Nike kept Kaepernick under contract but still wasn’t sure how to use him, if at all.

Over time, Kaepernick’s stature as a civil-rights activist grew. He received high- profile awards for his activism and negotiated book and film deals. Nike rival Adidas expressed interest in signing him.

On June 18, 2018, Kaepernick’s representatives and Nike executives met to discuss his future with the company. Nike said it saw a role for Kaepernick but was worried about offending the NFL. However, this risk had diminished, as Nike and the league had recently announced they would be scaling back their partnership after 2020.

Wieden+Kennedy, Nike’s longtime ad agency, encouraged Nike to make Kaepernick the face of its “Just Do It” 30th-anniversary campaign. Weighing the pros and cons, the company decided to take the risk.

On September 3, Kaepernick tweeted a close-up photo of his face overlaid with the Nike swoosh and the tagline “Believe in something. Even if it means sacrificing everything.” Billboards featuring Kaepernick were unveiled, and he was featured in a two-minute inspirational video that aired during the NFL season opener.

The campaign got plenty of attention—and attracted mixed reactions. Some people burned Nike products in protest and called for a boycott of the company. President Trump tweeted that the ads were sending “a terrible message.” But the campaign generated positive buzz from those who supported Kaepernick’s cause, and Nike’s online sales jumped 31% over Labor Day weekend as compared to the previous year’s 17% increase, Fortune reports. In addition, Nike’s fear of antagonizing the NFL appeared to be unfounded. The league released a diplomatic statement: “The social-justice issues that Colin and other professional athletes have raised deserve our attention and action.”

Like all relationships, business partnerships ebb and flow. When the relationship hits a rough patch or seems to have outlived its usefulness, we may be tempted to cut our losses. Before doing so, consider the likely repercussions (including any possible backlash from outside parties) and ensure that you have explored all meaningful opportunities for doing business together. If possible, leave the door open for a mutually beneficial reunion.