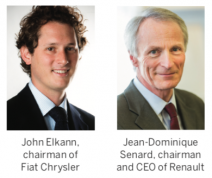 Because of tightening global competition and demand for new technologies, including self-driving cars, automakers are feeling the urge to merge. For years, Fiat Chrysler CEO Sergio Marchionne and Renault chairman and CEO Carlos Ghosn—both known as tough negotiators and demanding bosses— discussed the possibility of blending their two companies, but nothing came of it.

Then everything changed. In July 2018, Marchionne died suddenly of an undisclosed illness. Four months later, Ghosn was arrested in Tokyo and charged with underreporting his assets and misusing company funds. Imprisoned in Japan, he eventually stepped down from Renault and was replaced by auto-industry veteran Jean- Dominique Senard.

Fiat Chrysler chairman John Elkann, an American-Italian whose grandfather, former Fiat chairman Gianni Agnelli, had handpicked him in his twenties to run the family business, stepped up the search for a merger partner and reached out to Renault, among other companies.

For both Renault and Fiat Chrysler, the benefits of a merger appeared obvious. The combined company would overtake General Motors to become the world’s third-largest auto manufacturer by volume, after Toyota and Volkswagen. Amid a downturn in the European auto market, Renault would gain access to new international markets.

Both sides would save billions by buying supplies and components jointly and sharing development costs. And Elkann wanted to enfold Fiat Chrysler into a larger company to make it easier for him to diversify his family’s holdings.

Yet despite such apparent synergies, the negotiations flamed out within a month. What went wrong? As we’ll see, the parties failed to adequately account for the interests and concerns of other parties that had a significant stake in the deal, namely the government of France and Japanese automaker Nissan. The common tendency to focus myopically on the parties at the table is a common mistake, one that all negotiators need to learn to anticipate and overcome.

An understanding of why Renault’s merger with Fiat Chrysler fizzled out begins with the French automaker’s alliance with Nissan. In 1999, Renault bailed out a struggling Nissan to form a strategic alliance that has been heralded as a “model of cross-cultural cooperation,” according to the New York Times. Under the agreement, the automakers share purchasing and development costs while maintaining their unique identities and concentrating on different global markets. Mitsubishi and other automakers have since joined the alliance.

Recently, however, cracks formed in the partnership. After Nissan rebounded, its CEO, Hiroto Saikawa, complained that the alliance’s ownership structure no longer made sense: Renault owns 43.4% of Nissan, while Nissan owns only 15% of Renault—even though Nissan sold 5.5 million cars in the last fiscal year as compared to fewer than 4 million for Renault. Moreover, Nissan’s ownership stake in Renault doesn’t include voting rights, while Renault has full voting rights in Nissan, according to the Wall Street Journal.

Those resentments came to a head when Renault’s Ghosn tried to advance plans to merge Renault and Nissan by creating a holding company for all their shares. At that point, Nissan executives reportedly shared the allegations with Japanese prosecutors about financial wrongdoing by Ghosn that led to his arrest, the Journal reports.

Ghosn’s departure from Renault created new problems for the cross-cultural alliance. The Brazilian-born French executive had learned to navigate Japanese corporate culture, which prioritizes consensus building and generally eschews direct confrontation, according to the Journal. Concerned about Nissan’s sagging financial performance, Senard, Ghosn’s replacement at Renault, reportedly tried to “smooth things over,” according to the Times. But when Nissan leaked an informal proposal Senard presented to officially merge the two companies to the press, Senard viewed it as a “serious breach of trust,” the Times reports.

From deal blockers to partners

To head off sabotage and add value, your team should take time to fully answer the following questions before embarking on any important negotiation:

With his proposed Nissan merger going nowhere, Senard was receptive when Fiat Chrysler chief Elkann suggested in May 2019 that they seriously consider merging Fiat Chrysler and Renault. Elkann and Senard had known each other for years and “share a very European elegance,” one source told the Times. (Fiat Chrysler, itself the successful product of a cross-cultural merger, is based in Turin, Italy.) Soon the two men had agreed to try to get Renault’s board of directors to approve a deal before Renault’s general shareholder meeting on June 12.

Senard was careful to inform French president Emmanuel Macron about Fiat Chrysler’s overture toward Renault. The French government owns a 15% stake in Renault and would want to see its interests represented at the bargaining table, such as protections on French jobs. In a meeting with Senard, French economy and finance minister Bruno Le Maire said that any deal reached would need to be compatible with Renault’s alliance with Nissan.

There was one interested party that Renault decided not to tell about its talks with Fiat Chrysler: Nissan. If they joined forces, Renault and Fiat Chrysler— which sold a combined 8.7 million cars last year—would become “an even more overbearing partner” for Nissan, the Times reports. Unlike Renault, Fiat Chrysler competes with Nissan in the U.S. market. Renault’s leaders worried their Japanese counterparts might try to sabotage talks with press leaks, a source told the Times. It was clear that Renault’s trust in Nissan’s leadership had been badly shaken by past leaks and Ghosn’s arrest.

On May 26, Fiat Chrysler sent Renault a formal proposal for a fifty-fifty merger in which Senard would be CEO of the new company, Elkann would be its nonexecutive chairman, and Fiat Chrysler’s Agnelli family and the French government would have diluted stakes and voting powers, according to the Journal.

Only then did Renault’s Senard email Saikawa, Nissan’s CEO, to fill him in. Nissan executives felt blindsided and betrayed: Their company’s technology would be critical to the proposed combination, yet Nissan was being treated like an outsider in a merger that would “swap out one small 43% shareholder for a bigger 43% shareholder it doesn’t know,” a source told the Times. Nissan wanted a seat at the negotiating table, yet it shared its concerns so subtly that they were “essentially lost in translation,” according to the Journal.

The French government was also concerned. After reading in a newspaper that Fiat Chrysler considered the offer it had made Renault to be nonnegotiable, Le Maire called Fiat’s Elkann to demand job guarantees and other measures aimed at protecting Renault’s presence in France.

On June 3, Nissan CEO Saikawa said the proposed deal would necessitate a “fundamental review” of his company’s alliance with Renault, a statement that alarmed the French government. The same day, Renault’s board assembled to discuss the merger but held off on a vote.

Two days later, the Renault board, which included a French government representative and two Nissan representatives, reconvened to discuss and negotiate the deal. Fiat Chrysler had offered France concessions to address its concerns, including representation on the combined company’s board and a promise to base its European headquarters in France.

After several hours, 14 members of the 20-person board backed the deal, the Times reports, but Nissan’s representatives abstained from voting. Believing this was a sign of future opposition, the French government’s representative, Martin Vial, conferred with Le Maire. He then announced to the board that the finance minister was flying to Tokyo the next day to discuss the merger with the Japanese government and needed a five-day delay on a final vote.

For Fiat Chrysler, the delay was a sign that the French government would be a meddlesome partner, a situation the Italian-American company could not abide, according to the Times. After conferring with Senard and his board, Fiat Chrysler chair Elkann emailed a letter to Senard: The deal was off.

In the press, the French government was roundly criticized for trying to micromanage the deal. That accusation may be fair, but it’s also notable that France appeared to be the only party attuned to Nissan’s objections to a Renault–Fiat Chrysler tie-up. “The bride [Renault] was already in a committed relationship, which a watchful parent wanted to preserve,” the Journal wrote.

Rather than being up front with Nissan about the negotiations and trying to work through their growing rift, Renault shut out Nissan entirely until the deal was practically done. Given this slight, as well as Nissan’s legitimate concerns about how the merger would affect its alliance with Renault, it was hardly surprising that Nissan declined to bless the deal.

More broadly, the failed talks highlight the importance in dealmaking of looking beyond the parties at the table to consider how an agreement could affect other interested parties—including existing clients, customers, and partners; government entities; and the public at large. Rather than viewing such parties as potential deal blockers, think about what they might bring to the table. After all, in negotiation, complexity brings opportunities for value-
creating tradeoffs.

Lessons from a star-crossed deal

Here are other negotiation tips from the Renault–Fiat Chrysler talks: