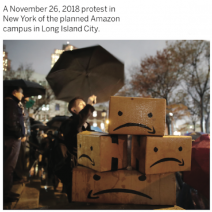 In the fall of 2017, Amazon created a stir when it announced it was taking bids from North American cities and regions interested in hosting its second headquarters, known as HQ2. Driven by the promise of 50,000 jobs and a $5 billion campus that Amazon promised would be the “full equal” of its main campus in Seattle, 238 North American cities and regions set to work crafting proposals. While Amazon required the cities and regions to sign nondisclosure agreements to keep details of the process hidden from their citizens, applicants promised the company millions and, in some cases, billions in tax incentives, subsidies, and infrastructure spending. In January 2018, Amazon narrowed the race to 20 cities/regions, including New York City, northern Virginia, Dallas, Toronto, and Atlanta. Amazon toured proposed sites, requested “reams of data,” and secured detailed guarantees of tax incentives and other perks, according to the Wall Street Journal. Then the search went quiet, and the contenders waited.

In November, the news leaked that Amazon had decided to split HQ2 between Long Island City, a neighborhood in the New York City borough of Queens, and Crystal City, a neighborhood in Arlington, Va., across the Potomac River from Washington, D.C. The states of New York and Virginia reportedly offered Amazon up to $2 billion in tax incentives, dependent on the number of jobs ultimately created, and also promised to invest in infrastructure upgrades and job-training programs. Amazon already had a strong presence in New York and Washington, and both regions had long been considered obvious sites for expansion due to the size and quality of their labor pools. In addition, it’s been noted that Amazon CEO Jeff Bezos has a home in New York and in the Washington area, and he owns the Washington Post.

Although it was inevitable that the auction’s many losers would be disappointed, reaction to the news that HQ2 was being divided between the two most obvious front-runners, neither of which would be the “full equal” of the Seattle campus, was especially bitter. Many observers called the contest a farce and a sham. Cities and regions that hired high-priced consultants to painstakingly craft their proposals couldn’t help but feel they’d wasted their time and money.

As for Amazon, it ended the circus having scored months of free publicity and privileged information about cities and regions across North America. “It’s tempting to roll your eyes at this soap opera, but Amazon will walk away from this stunt with a cache of incredibly valuable data,” such as infrastructure plans, that it will use to “sideline the competition” in years to come, Stacy Mitchell of the Institute for Local Self-Reliance told the Times.

We don’t know whether Amazon considered each applicant in its HQ2 auction with an open mind, ready to be persuaded. But it’s clear that it could have met its goal without wasting the time and money of hundreds of cities and regions. The story illuminates how to avoid being drawn into bad-faith negotiations and value-destroying auctions.

In a 2015 study, researchers Edy Glozman (Columbia Law School), Netta Barak-Corren (Harvard Law School), and Ilan Yaniv (Hebrew University of Jerusalem) examined “false negotiations”—a negotiation in which one party has no desire to reach agreement with the other party. False negotiators believe they have better alternatives to any offer you could make, yet they are motivated to try to sustain or improve their BATNA, or best alternative to a negotiated agreement, by negotiating with you. They might hope to use an offer from you to get a better deal elsewhere or to drive up the price in a bidding war, for example.

How can you detect false negotiators? The results of an experiment the researchers conducted offer some clues. Participants who were given incentives to avoid making a deal in a negotiation simulation succeeded in reaching impasse by:

Glozman and colleagues advise us to view an array of these behaviors as a “syndrome” of signals that your counterpart is bargaining in bad faith. When you observe such behaviors, think about any hidden motives the other side may have to take advantage of your goodwill.

Bad-faith bargaining may be especially common in auctions. When a seller has a hot commodity to offer, he might try to get the best offer possible from his top prospects by luring them into a bidding war. In such an auction, the seller may have no interest in doing business with most bidders but engages them to help drive up the sale price.

Bidders in an auction are more likely to overpay for a commodity or contract when the competition is especially fierce, as it was in Amazon’s contest. When everyone seems desperate to win a prize, “auction fever” can become an epidemic. Bidders afflicted with auction fever want to win at any cost, even if that means paying more than the item up for sale is worth. But once their “auction high” wears off, winners often end up regretting their purchase.

Amazon’s HQ2 contest seems to have been designed to generate maximum corporate subsidies from the winning bidder (or bidders). “By pitting cities against one another, Amazon created a frenzy of ever more lavish and outlandish offers,” writes Bryce Covert in a New York Times op-ed. Maryland offered $6.5 billion in tax incentives; its transportation secretary promised to write Amazon a “blank check.” Newark, N.J., promised $7 billion, while Columbus, Ohio, said it would waive all of Amazon’s property taxes for 15 years.

A particularly insidious aspect of Amazon’s HQ2 competition is that, by pitting cities and regions against one another, it encouraged them to bid against their own self-interest.

Economists largely agree that corporate welfare, in the form of tax incentives and other handouts, doesn’t benefit communities in the long run and often harms them financially. There’s little correlation between a state’s giveaways and its unemployment rate or income levels, according to research by W.E. Upjohn Institute for Employment Research economist Timothy Bartik. And foregone tax revenue contributes to budget shortfalls, with schools, infrastructure, and critical city services suffering the most.

While cities and states seemed to heed economists’ warnings by offering fewer tax incentives over the past decade following a slew of disastrous deals in the 1990s, corporate welfare appears to be making a comeback, according to the Times. The sky-high subsidies promised to Amazon and the $4 billion in incentives that the state of Wisconsin offered Taiwanese electronics manufacturer Foxconn in 2017 are two prominent examples. Politicians in the winning jurisdictions, such as New York State governor Andrew Cuomo and New York City mayor Bill de Blasio, relish the positive PR that comes with announcements of jobs and economic development. By the time a project fails to pay off, the politicians often have moved on and don’t have to deal with the fallout, Covert notes.

Interestingly, tax incentives often aren’t even necessary to lure a company to a region. About two-thirds of the time, they’re offered to companies that would have moved to the area anyway, according to Bartik. Corporations tend to base their site decisions on other factors, such as a strong talent pool, affordable housing, and good public transit.

A particularly insidious aspect of Amazon’s HQ2 competition is that, by pitting cities and regions against one another, it encouraged them to bid against their own self-interest.

Amazon, which generated a net profit of $2.5 billion in the first quarter of 2018 and reached $1 trillion in market value in September, doesn’t need gigantic giveaways and likely would have expanded without them in the same locales. “Why should the richest man in the history of the world get money to open his business?” Washington, D.C.–area hardware store owner Gina Schaefer asked the Times, referring to Bezos.

How can states and cities, or multiple companies in the same industry, avoid being drawn into value-destroying bidding wars? By staying out of them. Counties in Ohio and Colorado have reached agreements to stop using tax breaks to compete with one another, the Times reports. Organizations facing auctions where price is the main or only criteria at stake should encourage the seller to negotiate with them and any other front-runners individually instead of holding an auction. Explain to the seller that you believe you’ll both benefit from discussing a host of issues rather than focusing exclusively on price.

Lessons from a PR stunt:

New York State governor Andrew Cuomo and New York City mayor Bill de Blasio have a famously antagonistic relationship. Though the two Democrats were friends in the 1990s, their politics gradually diverged over the years even as both of their profiles rose. Their differences came to a head in 2013 when Cuomo criticized de Blasio’s first signature initiative as mayor—a tax on New York’s wealthy to fund universal free prekindergarten. The acrimony escalated with skirmishes over several issues, most notably funding to address New York City’s subway crisis.

It wasn’t surprising, then, that when Amazon was on the verge of announcing a huge new technology center in Queens, its executives paid a final visit to the city and met separately with Cuomo and de Blasio to ask them one last question: Could they get along well enough to shepherd the project to completion?

Amazon officials were reportedly satisfied enough with the politicians’ responses to move forward with an agreement. But their concerns highlight the risks of high- profile conflicts between rivals. Personality clashes may seem harmless, but your involvement in one could damage your reputation and raise real doubts about your ability to collaborate. When rivalries erupt, whether inside or across organizations, work to resolve them head-on.