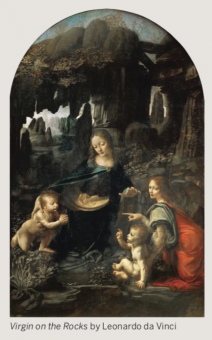 To launch a complex project or business venture, we often need to conduct a whole series of negotiations with numerous counterparts. Juggling multiple deals requires a unique set of negotiation strategies. There’s much to learn from the linked negotiations that curators at France’s Louvre Museum conducted to secure loans of Leonardo da Vinci paintings and drawings for a major exhibit that opened in October, as Kelly Crow reports in the Wall Street Journal.

After being hired by the Louvre as a paintings curator in 2006, Vincent Delieuvin and his new colleague, drawings and prints curator Louis Frank, developed the provocative theory that ultimate Renaissance man Leonardo da Vinci explored so many fields—from science to math to music—primarily to serve his work as a painter, though no more than about 20 paintings have been attributed to him.

To test their theory, the curators had several of the museum’s five Leonardo paintings fully restored and had all of them analyzed scientifically. Frank undertook a French retranslation of a 16th-century biography of the great master. And they began planning a landmark exhibit for 2019, the 500th anniversary of Leonardo’s death. Gathering together as many of the artist’s paintings and related drawings as possible would allow Delieuvin and Frank to test and share their theory. It would also require them and their colleagues to conduct dozens of negotiations with other museums and private collectors for the right to bring their Leonardos to Paris.

Ultimately, 160 works were assembled for the show, only 32 of which were owned by the Louvre. “The loans were our biggest nightmare,” Delieuvin told the Journal. Negotiations with museums and other entities lasted several years and went down to the wire, concluding just a few days before the four-month exhibit was set to open on October 24.

Securing loans of prestigious works of art is a complex process. “People think [the museum] world is so genteel, but it takes a ton of horse-trading and convincing and last-minute panicking to pull off these shows,” University of Oxford art-history professor Martin Kemp told the Journal. Typically, the lender does not charge the borrower a fee for the loaned artwork, but the borrower must buy substantial insurance to protect the lender.

In their quest for loaned Leonardos, Delieuvin and Frank visited at least 20 museums in more than a dozen countries to make their case and stir up excitement for the exhibition. Competition was fierce, as many other museums were planning their own Leonardo retrospectives for the 500th anniversary. But the fact that the Louvre already housed about one-third of Leonardo’s paintings helped, Delieuvin explained to CNN: Many museums were interested in contributing to what was expected to be the largest-ever exhibit

of his paintings. Despite planning its own Leonardo shows, for example, Britain’s Royal Collection Trust agreed to loan 24 drawings of his masterpiece The Last Supper.

Seeking a religious Leonardo painting from Russia’s State Hermitage Museum, Delieuvin and Frank learned it had already been promised to two Italian museums for earlier in 2019. After repeated requests, however, Hermitage director Mikhail Piotrovsky agreed to allow the painting, Benois Madonna, to make a final stop in France before returning home.

The Louvre planned well ahead to set up successful negotiations for loans of Leonardo paintings from Italy’s Uffizi Gallery. To encourage reciprocity, the Paris museum generously lent three of its Leonardo paintings to the 2015 Milan Expo, a major Leonardo show. And when Italy’s cultural ministry established an international committee to evaluate loan proposals in advance of the 500th anniversary, Delieuvin joined it for the “networking opportunities and insider clues,” Crow writes in the Journal.

This early work teed up negotiations between France’s and Italy’s culture ministers. In 2017, they agreed to a swap: The Louvre could borrow Leonardo works from Italy in exchange for contributing rare Raphael works to shows planned in Italy for 2020.

That deal collapsed, however, when Italy’s centrist government was briefly replaced by populist leadership that objected to sending the Italian master’s work off to France for the landmark anniversary. After another power shift in Italy, the agreement was reinstated—but then jeopardized once again when an Italian heritage group asked a Venice court to weigh in on whether famous Leonardo drawings, including Vitruvian Man, were too fragile to travel. Just a week before the Louvre show, the court ruled that the artwork could go to France.

Days before the exhibit, Delieuvin was holding out hope that the owner of Salvator Mundi, a recently discovered Leonardo painting bought anonymously at auction for a record-breaking $450 million in 2017, would loan it at the last minute. The painting is believed to be owned by Saudi Arabia’s crown prince, but its location is unknown, and the Louvre received no response to its requests to borrow the painting.

We might assume that the crown jewel of the Leonardo show would be the Louvre’s own Mona Lisa. But Delieuvin and Frank didn’t even ask to include the revered painting in the exhibit. To accommodate its 30,000 daily visitors, the Mona Lisa will remain one floor away from the temporary exhibition.

Ultimately, understanding the great artist himself was a far more difficult undertaking than the loan negotiations, Delieuvin told CNN. But the painstaking efforts have already paid off. Scientific analysis of Leonardo’s painting Virgin of the Rocks, for example, revealed sketches, hidden for 500 years, that help confirm the theory that, as a painter, Leonardo was a perfectionist, “striving to find the best composition and the most beautiful pictorial execution,” according to Delieuvin.

The Louvre curators’ moves suggest the following lessons to those managing linked negotiations:

1. Plan ahead. By networking and making generous loan offers, the Louvre curators encouraged their future counterparts to enter negotiations with a spirit of reciprocity.

2. Stir up excitement. Paint a compelling picture of your ultimate goal to inspire negotiators to want to be part of it.

3. Go the distance. Because of the benefits of negotiating face-to-face, be willing to travel near and far in pursuit of your goals.

4. Get the sequence right. Seek early agreements with influential parties in your field whose buy-in could compel others to get on board.

5. Ride out the winds of change. If you start negotiating early enough, you may be able to survive political and organizational turmoil.