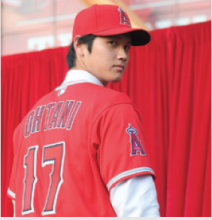 It’s been 100 years since Major League Baseball (MLB) had a superstar at both hitting and pitching in its ranks—namely, Babe Ruth. With teams rewarding specialists, players rarely have the talent, drive, and freedom to successfully multitask as so-called two-way players.

That’s why excitement was so high this winter when 23-year-old Japanese hitting and pitching phenomenon Shohei Ohtani put himself on the U.S. market. While playing with the Hokkaido Nippon-Ham Fighters, Ohtani recorded the fastest pitch ever in Japan—102.5 mph—while also racking up home runs. The hype grew and grew, with New York Times writer David Waldstein wondering if Ohtani’s entrance into the MLB might usher in a “new era” of multitasking players.

Ohtani himself seemed to understand that living up to the nickname “Japan’s Babe Ruth” would require not only dedicated practice on the field but also carefully managed negotiations— carried out amid a minefield of rules and intense scrutiny.

While domestic would-be rookies are subject to the MLB draft, the system is different for incoming international players. They’re free to negotiate with multiple teams, but league rules set relatively low caps on signing bonuses for international players—until recently, about a $2 million to $4 million annual budget per team. The cap is justified as a means of ensuring that the wealthiest teams don’t snare all the best foreign talent. Critics, however, say the cap is designed to underpay international players, many of whom are impoverished teens from Latin America.

In recent years, teams could pay above the bonus cap in return for paying a fine and accepting a much lower cap on international recruiting in following years. In addition, international players were exempt from the bonus cap once they turned 23 and had played for five years in a league in their home country.

In late 2016, MLB revised the rules, raising the age of exemption from the cap to 25—just months before Ohtani’s 23rd birthday—and the required number of years played abroad to six, writes Emma Baccellieri in Deadspin. In addition, the league said teams would no longer be allowed to pay above the bonus cap, which was raised to $4.75 million per year for most teams. MLB also warned it would “impose strict penalties on any club that attempts to circumvent the system,” according to Baseball America.

After the age exemption was raised from 23 to 25, Ohtani was expected to play in Japan two more years before entering the American market. At 25, he could have been hired as an unrestricted free agent and negotiated a contract that might exceed the $155 million deal that the New York Yankees gave to Masahiro Tanaka in January 2014, according to the New York Times.

Instead, Ohtani announced his intention to plunge into the MLB right away—despite the bonus restriction and the fact that he’d start off at the league minimum salary, currently a paltry (by MLB standards) $545,000. The decision to enter the MLB sooner rather than later—and likely be paid only about 5% of what he could get if he waited two years—was only Ohtani’s first surprising negotiation move.

Before Ohtani’s U.S. tour kicked off, MLB officials made a point of warning the teams preparing to bid on him to follow the league’s negotiating rules closely: They could try to persuade Ohtani based only on the merits of their clubs and cities, and were not allowed to discuss future contracts or business relationships. They also were cautioned against making quid-pro-quo payoffs or payments to those close to Ohtani.

The MLB’s concerns were valid. Before tough rules on international bonuses were put in place in 2012, “off-the-book payoffs and cheating were standard operating procedures for decades,” according to ESPN’s Buster Olney. But rather than curbing “under-the-table deals,” according to Emma Baccellieri of Deadspin, the tighter bonus caps may just push unethical tactics “further underground.” Indeed, this past fall, the league found Atlanta Braves manager John Coppolella guilty of covering up a secret scheme that paid international recruits more than league rules allowed. As punishment, the MLB permanently banned Coppolella from the league, released 13 of the Braves’ recent international recruits from their contracts, and severely restricted the team’s ability to sign international players in the years ahead.

During the first week of December, Ohtani crossed the United States listening to pitches. As the best player in Japan and the most highly coveted MLB recruit, a successful, deep-pocketed team such as the New York Yankees, Los Angeles Dodgers, or Boston Red Sox would have been a natural choice. A top-ranked team would give Ohtani a high profile and strong odds of advancing to the playoffs.

Interestingly, however, after the initial presentations, Ohtani crossed the Yankees and Red Sox off his list. Instead, he focused on West Coast teams, perhaps in part due to their closer proximity to Japan.

On December 8, Ohtani’s agent announced that his client had decided to sign with the Los Angeles Angels. The six-year deal comes with a $2.3 million signing bonus and starts him off at the league minimum salary for his first three years; the Angels also must pay a $20 million “posting fee” to the Fighters to release him from his contract.

For teams such as the Seattle Mariners and the Dodgers, the choice was as surprising as it was disappointing. The Angels have struggled recently, making it to the postseason just once in the last eight years. Angels general manager Billy Eppler told MLB.com that he literally fell out of his chair when Ohtani’s agent phoned him with the good news. (He stood up, tried to sit back down, and missed.)

But Ohtani’s shocker of a decision makes more sense in light of his unique goals. Known for being unpretentious and private, he apparently was more interested in setting himself up to be a successful two-way player over the long term than in maximizing his earnings or winning a World Series ring right off the bat.

Unlike most of the other teams Ohtani negotiated with, the Angels needed a designated hitter. In Japan, Ohtani often served as a designated hitter on weekdays and then pitched on Sundays. The Angels could give him a similar schedule, allowing him to hone his twin gifts, according to the Los Angeles Times. In addition, with the Angels, Ohtani will face less pressure to perform as a hitter than he would with a team such as the Dodgers or Yankees—potentially allowing him to prolong his two-way experiment even if he struggles at the plate.

Finally, with center fielder Mike Trout on his team, Ohtani—who has made no secret of his desire to become the best player in the world—has the opportunity to play with the man widely considered to be the current holder of that title.

“What mattered to him most wasn’t market size, time zone, or league, but that he felt a true bond with the Angels,” Ohtani’s agent, Nez Balelo, wrote in his statement about his client’s decisions. “He sees this as the best environment to develop and reach the next level and attain his career goals.”

Even as Ohtani’s decision was being announced, according to ESPN, MLB officials hinted that an investigation of the negotiation process was likely—not because any unethical behavior had been detected but simply because the incentives for teams to break the rules were so high.

The MLB could reduce this threat of rule breaking and benefit more broadly by giving teams bigger bonus pools for international recruiting—perhaps about $12 million per team, according to Ben Badler of Baseball America. “Giving teams more room to spend spurs innovation, rewards teams that want to invest internationally, and brings more opportunities for players in markets outside of Latin America like Taiwan, Korea, and perhaps even Japan to come over to the United States as amateur players,” writes Badler. “Any time you put an artificial constraint on prices, you create incentives for under-the-table dealings, especially if the pools are too low.”

Signing bonuses remain artificially low because international recruits don’t have a voice at the negotiating table when such decisions are made. It’s up to MLB and the MLB Players Association to make the changes needed to lessen the temptations and suspicion surrounding international recruiting.

3 lessons from a nail-biter of a negotiation:

1. Understand your true goals. Ohtani didn’t allow himself to be distracted by outside pressures to maximize his income. Instead, he made decisions that he believed would best set him up to pursue his primary goal of becoming an effective two-way player in the MLB.

2. Eliminate incentives for unethical behavior. Organizations need to recognize that negotiators might behave ethically in the face of overwhelming incentives to break the rules. To protect their reputation and bottom line, organizational leaders need to identify and eliminate such temptations.

3. Audit your own behavior. Consider the ethical implications of your business decisions at each step in the negotiation process. Follow your own moral compass in addition to abiding by the rules and regulations.