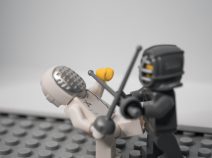 Sometimes a negotiation is all about managing perceptions. As this story below shows, focusing a counterpart on his own BATNA can persuade him to reduce the intensity of his hard-bargaining tactics.

Q: A customer is pressuring me to make a deal fast. I don’t want to be forced into a one-sided agreement and prefer to reach a compromise on mutually beneficial terms. How should I respond to such hard-bargaining tactics?

A: As long as your customer thinks he’s your only option, he will believe that he has all the leverage in your negotiation and will continue bargaining aggressively. In this respect, the business world is similar to that of international relations, where, as the Greek historian Thucydides put it, “The strong do what they can, and the weak suffer what they must.”

Consider an example from diplomatic history. In the 1970s and ’80s, the United States engaged in an unprecedented coercive campaign to persuade Taiwan to abandon its pursuit of nuclear weapons. U.S. officials employed thinly veiled threats to militarily abandon the island and bring its economy to a halt by cutting off its energy supplies. Taiwan backed down. Its complete diplomatic isolation—the United States was its only security guarantor and diplomatic ally—made the extreme pressure tactics possible and effective.

As this story shows, a weak BATNA, or best alternative to a negotiated agreement, can severely impede your ability to negotiate effectively and may invite exploitative moves from your counterpart. To strengthen your position, you should engage in “perception management” of your BATNA. By managing perceptions and clarifying your willingness to explore alternative deals if the pressure continues, you suggest the possibility of turning the tables on your opponent—that is, threatening him with the loss of your attractive business deal. By doing so, you seek to increase the costs of his hard-bargaining stance and force him to scale back or abandon such tactics.

1. Understand your counterpart. Is your customer simply trying to exploit you, believing that you have no other options? Or is he keenly interested in closing the deal as soon as possible? Maybe both? Question him to try to better understand the motivations behind his aggressive negotiation approach.

2. Demonstrate your credibility. Your credibility—whether the other side believes you will do what you claim—forms the foundation of your negotiation strategy. In this situation, your credibility depends on (a) your willingness to exercise your BATNA and (b) the impact of this decision on your counterpart.

To demonstrate your willingness to walk away, you must clarify that you are capable of bearing any costs of doing so. You might do this by revealing that you’ve been exploring alternative deals, a fact that will demonstrate your willingness to abandon the ongoing negotiation in favor of an alternative if you’re pushed too far. Public exploration of alternative deals signals that you are not as isolated as the other side may believe.

3. Managing perceptions of his own BATNA. Next, highlight the potential impact on your customer of your possible decision to walk away by specifying the benefits he will lose if he continues pressuring you. By forcing him to consider what he will do if he forfeits this deal with you, you will be shaping your customer’s perception of his own BATNA.

Here’s another example from the diplomatic world. When, in the 1980s, the United States sought to pressure Pakistan to abandon its pursuit of nuclear weapons, Islamabad highlighted its critical support of the mujahideen’s efforts to evict the Soviet army from Afghanistan. It was a pointed reminder that Pakistan was playing a key role in the Cold War struggle against the Soviet Union. Since the United States had no alternative partner to Pakistan in Afghanistan, it had no choice but to put its nuclear nonproliferation objectives on the back burner.

As this story shows, focusing a counterpart on his own BATNA can persuade him to reduce the intensity of his hard-bargaining tactics.

How do you work on managing perceptions in negotiation?