The Great Negotiator Award was established in 2000 by the Program on Negotiation at Harvard Law School. This award is presented to individuals whose lifetime achievements in negotiation and dispute resolution have had a significant impact on society. The award seeks not only to honor the extraordinary accomplishments of outstanding negotiators but also to focus public attention on the growing importance of negotiation as an effective way to resolve complex disputes in both the public and private sectors. Over the years, the Great Negotiator Award has recognized a diverse array of distinguished negotiators from around the world. 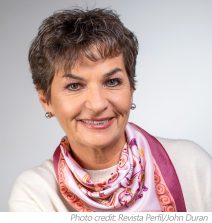 Christiana Figueres is a Costa Rican citizen who served as the Executive Secretary of the United Nations Framework Convention on Climate Change from 2010-2016. During her tenure, Ms. Figueres brought together national and sub-national governments, corporations and activists, women’s groups, scientists and spiritual communities, financial institutions and NGOs to jointly deliver the historic 2015 Paris … Read 2022: Christiana Figueres

Juan Manuel Santos is a Colombian politician, former president of Colombia, and winner of the 2016 Nobel Peace Prize. Early in his career, he worked as an economist and journalist—and was recognized as a Nieman Fellow for his award-winning columns and reporting. In addition, he was a member and vice chair of the Inter-American Dialogue, … Read 2017: Juan Manuel Santos, President of Colombia

A veteran Singapore diplomat, Ambassador Tommy Koh has spent more than five decades in public service. Early in his career, he served as Singapore’s permanent representative to the United Nations before being appointed ambassador to the United States. He subsequently served as president of the Third UN Conference on the Law of the Sea and … Read This Post

As secretary of state, Baker traveled to 90 countries during the unprecedented challenges and opportunities of the post–Cold War … Read This Post

Martti Ahtisaari is a Finnish politician and United Nations diplomat who also served as the 10th president of Finland. He received the 2008 Nobel Peace Prize in recognition of his international conflict resolution work spanning three decades, in Indonesia, Iraq, Kosovo, and Namibia.

During the course of his diplomatic career, Ahtisaari served as Finland’s ambassador to … Read This Post

Husband and wife duo Christo and Jeanne-Claude created environmental works of art that were displayed across Europe and the United States. The couple gained fame for creating large-scale, site-specific pieces that were formed by wrapping landmark buildings, landscapes, and industrial pieces in vast amounts of fabric. The wrapping of the Reichstag in Berlin and the … Read This Post

Bruce Wasserstein was an American investment banker, businessman, and writer who began his career as an attorney with Cravath, Swaine & Moore. His ability to skillfully negotiate complex, high-stakes situations led to his appointment as head of investment banking at First Boston Corporation. He subsequently established the investment bank boutique Wasserstein Perella & Co., which … Read This Post

Sadako Ogata began her career in diplomacy in 1968, serving on the Japanese delegation to the United Nations General Assembly and as a minister on the Permanent Mission of Japan to the UN. In 1979, she led a mission to provide assistance to Cambodian refugees. In 1990, she became UN high commissioner for refugees, a … Read 2005: Sadako Ogata, Japanese Diplomat

Richard Holbrooke, an American diplomat and author, had an extensive background in international conflicts. After joining the U.S. Foreign Service, he worked on the White House Vietnam staff under President Johnson. He also served as an American delegate to the Vietnam peace talks in Paris. During President Carter’s administration, Holbrooke served as assistant secretary of … Read 2004: Richard Holbrooke, American Diplomat

As a public servant, Stuart Eizenstat held several prominent roles over the course of two presidential administrations. He served as chief White House domestic policy adviser under President Jimmy Carter and later, under President Clinton, as U.S. ambassador to the European Union; under secretary of commerce for international trade; under secretary of state for economic, … Read This Post

Lakhdar Brahimi is a former United Nations diplomat whose peacemaking efforts spanned more than four decades. After fighting for Algerian independence, he was appointed the country’s foreign minister. He also served as UN special representative in Afghanistan and UN special envoy to Iraq. In 2007, he became a founding member of The Elders, a group … Read This Post

Charlene Barshefsky is a senior international partner at WilmerHale, where she advises Fortune 100 and other multinational companies on trade litigation, dispute resolution, government relations strategy, and U.S. commercial and regulatory issues. Over the years, she has shared her knowledge of U.S. and foreign trade laws and public procurement regimes in writings and lectures. Barshefsky … Read This Post

George Mitchell is a lawyer, businessman, author, and politician who served as a U.S. senator from 1980 to 1995 and as Senate minority leader from 1989 to 1995. In addition, he was a U.S. district judge for one year. As a U.S. senator, he played an instrumental role in the passage of the Americans with … Read This Post