Podcast for My Neighbourhood Panel Discussion 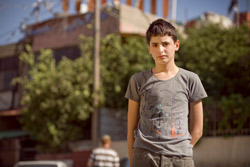 On February 20, 2013, The Program on Negotiation at Harvard Law School and the Middle East Initiative at Harvard Kennedy School presented a screening of  Just Vision’s documentary short “My Neighborhood,” directed by Julia Bacha and Rebekah Wingert-Jabi.  The ensuing panel discussion featured Julia Bacha, who directed and produced the film, Daniel Seidemann, the founder/director of Territorial Jerusalem, and Thomas Abowd of Tufts University’s Anthropology department, and was moderated by Professor Robert H. Mnookin, who is chair of the Program on Negotiation at Harvard Law School.

My Neighbourhood premiered in April 2012 at the Tribeca Film Festival in New York and has been met with support and recognition at venues including the Paley Center for Media, the San Francisco Jewish Film Festival, the Al Jazeera International Documentary Festival and the European Parliament.  View the film trailer here.