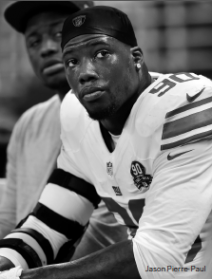 From time to time, our negotiations are interrupted by an unexpected development from outside the talks, such as the death of a loved one, a serious injury or illness, or a bankruptcy. At times, a pause may be all that’s needed before talks can get back on track; in other instances, the change may have a material impact on the negotiation, as was the case recently for the National Football League’s (NFL’s) New York Giants and Jason Pierre-Paul, a defensive end with the team since 2010.

Holding out for a better deal

In March, with the talented Pierre-Paul having completed a couple of disappointing seasons, the Giants designated him their franchise player. The “franchise tag” designation, as it is known, allows teams to make a one-year offer that tends to be equivalent to the average of the top five salaries at the player’s position or 120% of the player’s current salary, whichever is higher. For Pierre-Paul, that offer was $14.813 million, according to former sports agent Joel Corry of CBS Sports.
Pierre-Paul declined to sign the franchise offer in hopes of scoring a multiyear contract at a higher salary from the Giants or another team by the NFL’s preset July 15 deadline, a right he maintained as a restricted free agent; the Giants could choose to match any offer he received as long as the franchise tender was in place. The Giants made Pierre-Paul a multiyear offer—about $60 million, likely over five years—but he found it disappointing and boycotted the team’s spring workouts in protest. Yet most observers expected that he would come around, sign the one-year deal, and report to the Giants’ training camp on or soon after July 30, according to the New York Times.

Then came the Fourth of July holiday. In a fireworks accident at his Florida home, Pierre-Paul sustained injuries to his right hand that resulted in the amputation of his index finger.
Two representatives of the Giants, including the team’s head of medical services, rushed to Florida to check on Pierre-Paul and the quality of his care, but he refused to see them. The extent of the rest of the damage to his hand was unknown to the team. Though the defensive end remained on the team’s roster, the fact that he was without a contract meant he was not obligated to share information regarding his injury.

In the weeks that followed, Pierre-Paul remained mum on the details of his injuries—and thus his likely recovery time and playing future. He didn’t report to training camp or speak to Giants coaches or owners. In a photograph published in the New York Daily News, his right hand was obscured by bandages.

“We don’t know how extensive the damage is—that’s the problem,” team co-owner John Mara said at a press conference. “I don’t know how many fingers he has.”

The Giants revoked their multiyear deal, and Pierre-Paul didn’t get another one by the July 15 deadline. As of late August, the Giants’ franchise-tag contract was still on the table. It would be unusual for a team to revoke such an offer because of injury-related concerns, but if the Giants did, Pierre-Paul would become an unrestricted free agent who could negotiate with any NFL team, according to Corry.

What lay behind Pierre-Paul’s stalling strategy? If he signed the Giants’ one-year deal but hadn’t recovered enough to play, the team could put him on its “nonfootball injury list” and potentially dock his pay for games missed. He might save money by not signing until he is healthy enough to play. In addition, he may have been stalling to protest being franchised, a designation that most players dislike, Corry writes.

In public, Mara and the team’s coach, Tom Coughlin, expressed patience with Pierre-Paul and said their relationship with him was still strong. At this writing, it remains to be seen how long that patience might last—and how long Pierre-Paul would continue to test it.

We can all sympathize with Pierre-Paul for suffering a career setback right in the midst of negotiations for a new employment contract. Stalling for time may have felt like the best option for him. For business professionals who find their bargaining position worsened by a personal setback, delaying tactics may be a tempting choice, but they should be undertaken with care. Evasion may raise the other party’s suspicions and cause them to imagine a scenario that’s even worse than the reality. In their work, for example, Harvard Business School researchers Leslie John, Kate Barasz, and Michael Norton found that employers tended to imagine the worst about employment gaps on job candidates’ résumés. When we withhold potentially damaging information, people tend to distrust us. If you have news that is material to the negotiation that could weaken your bargaining position, be up front about it, but look for ways to reframe the perceived problem to be not as harmful as it first appears.