The Dynamics of Nonviolent Power:

Egypt, Tunisia and beyond 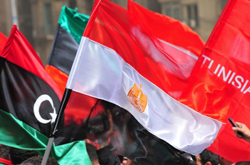 Senior Advisor at the International Center on Nonviolent Conflict (ICNC)

Bring your lunch. Drinks and dessert will be served.

What makes nonviolent, civilian-based movements effective?  What are the skills and strategic choices that can make the difference between success and failure for these movements?

As events in the Middle East reverberate around the world, speculation about whether other grassroots, civilian-based uprisings in the region and beyond will succeed or fail is a recurrent theme.  This presentation will provide insight into this question by providing an analytical framework for understanding how nonviolent movements work.  It will also contextualize recent events in the Middle East within the broader field of nonviolent conflict and best practices distilled from other nonviolent struggles during the 20th and century.

Hardy Merriman is a senior advisor at the International Center on Nonviolent Conflict (ICNC).  He writes and presents about nonviolent conflict both for academic audiences as well as for activists, organizers, other practitioners.  He has co-authored or contributed to works such as Waging Nonviolent Struggle: 20th Century Practice and 21st Century Potential (2005) by Gene Sharp, Civilian Jihad: Nonviolent Struggle, Democratization, and Governance in the Middle East (2010) by Maria Stephan (ed.), and the CANVAS Core Curriculum: A Guide to Effective Nonviolent Struggle (2007).  Hardy also serves as a member of the board of advisors to the Meta-Activism Project.

No Responses to “The Dynamics of Nonviolent Power:
Egypt, Tunisia and beyond”